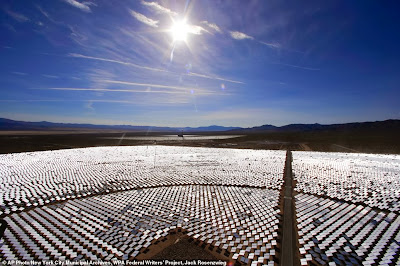 I just love it when ghouls get their way and end up... proving that they don't like being the ghouls they are. It is just another form of this.

You would think they would eventually figure out that pushing for more government will never do what they want, or even work out well if they happen to get it. But... no. Too stupid to live.

You gotta love libtards having their faces ground into it over and over.

Too bad it will never cause them to learn anything.

I have camped and jeeped in the Clark mountains, which is next to this complex on the west side.

When leaving the Clark range last year, we drove between two of the arrays, which gave us a close up view of the project and it's immensity.

It is truly a technological marvel, one which does impose somewhat on the landscape. However, it is far less imposing than the smoke made by coal plants that I have seen in the desert and I have to think the number of cooked birds are probably fewer than those chopped to pieces by wind turbines.

Personally, I like the idea of Nuclear, but I am apparently n disagreement with the greenies.

I wonder how green they'll be if the AC quits working and they have to sit in the dark all night. Every night.

Hey, the greenies here in Maine have been trying to putt the kibosh on several wind farm projects claiming the whirling blades kill migrating birds.

What happens if you don't like barbecue sauce? Let's get to the serious issue here, I am not sure it is fair for you to impose your culinary likes on the rest of us...

Oh, Mr Silvius, thanks for sending me the link and warning me about this closet communist, he'll have us all eating Borscht in communal canteens before you know it.

WoFat - the Law of Unintentional Consequences has very sharp teeth.

Doom - the best laid plans of mice and men etc. You'd think someone would have thought the effect of all that solar energy. Sun hot - ya know?

Kid - the libs never learn as long as someone else pays the consequences.

Capt. - the fwench get most of their electric power from nukes. They have a well tested, standardized nuclear power plant blueprint that they use to reduce costs.

Silvius - wasn't it the Kennedys who put the kibosh on wind farms off one of their vacation hideouts? NIMBY always plays a role in this.

Sig, Which is why I say we're going no where until after we [all] hit rock bottom.

Yes, it was dear Ted, AKA "The Swimmer" that did not like the sight of the windmills off Nantucket when he took his dog Splash sailing in the Kennedy family mega yacht. He raised a stink and threw his corpulent girth about and put the stop to it all. Thankfully he now finally has assumed room temperature. Greenies and Kool-Aid swillers need not despair though. Old Lurch "Kerry, reporting for duty" has undoubtedly, between junkets to Syria, taken up the mantle of protecting the properties of the rich and famous from such ghastly nonsense as floating over the horizon windmills. Banish the though that he should lay his noble unblemished eyes upon them while retrieving his own Aussie built luxury sailing mega yacht from the tax haven provided for him by keeping and registering said yacht down in Rhode Island instead of his own home state of Massachusetts.

I've been thinking; I don't recall seeing anything about this on the news. Wonder why?

"All they need is a high pressure spray of barbeque sauce surrounding the mirror array and some picnic tables."

Every environmentalist on the planet hates at least 1 form of alternate power. Some hate nukes, some hate wind farms, some hate biomass, some hate solar, some hate hydro, and of course, they ALL hate fossil fuel. That is until they need to heat or cool their houses. ASSHOLES, every stinking one of them!!

Isn't it music to our ears when different environmental groups go at each other.

You know, the more I thought about the notion and your additions, I had to stop and wonder...

Most of these eco-freaks are vegetarians, or worse, vegans. They are the ones who pushed for this in the first place. Perhaps they are tired of being without protein? Even if they can't eat it, who says they can't cook it? Seriously.

Leftists always end up with exactly what they didn't want, so often that one has to suspect in their evil designs lies a genius... One which thwarts them with the spite of their deeds. They have to realize God is against them, in every way, at this point. But... trudge on they do, anyway.

Let me see if I get this straight. The solar plant will provide power for 140,000 homes. A few birds will get fried by the plant and maybe eaten by a starving desert critter resting in the shade of the mirrors, but how many birds will get fried and served up for dinner in those 140,000 homes? If the PETA folks and the environmental folks really cared about the birds, they would get rid of the people. Oh yeah, that is the goal.. Sorry, I forgot...

DOOM, Bad things Always happen to stupid people. Which is some consolation. Not enough but.