Our Lady Of The Veil 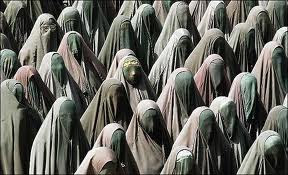 Islam is a religion of submissive ghosts. Their women are downright spooky when dressed in Sharia-compliant fashion. And they want to bring it to America.

This coming Fourth of July, Muslims are planning a “Million Muslim March” in D.C. to “re-establish the feelings of brother and sisterhood among Muslim Americans“ and start the ”healing” process after 9/11. And while there is no indication that rally will dabble in Sharia law, a different D.C. march scheduled for Thursday boldly declares its goal of bringing Sharia law “directly to the doorsteps of the United States of America.”

The rally is being spearheaded by radical UK Muslim cleric Anjem Choudary, who recently told Sean Hannity Americans are “the biggest criminals in the world today,“ and in October announced ”the flag of Islam will one day fly over the White House.” His group, Islam4UK, has been outlawed in Britain.

“We hereby call upon the Muslims in the US, particularly in New York, Michigan, Chicago and Washington DC to take lessons from their Muslim brothers and sisters in North Africa and the Middle East and rise to implement the Shari’ah in America,” the group Shariah4America, seemingly modeled after Choudary’s UK organization, says on its website.

They want to destroy the Statue of Liberty and replace it with a caterwauling Tower of Babel. 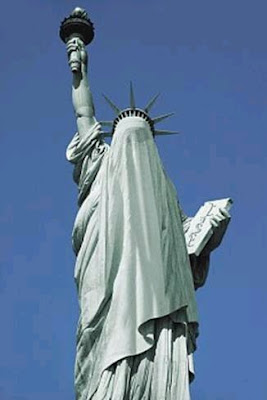 Unfortunately, over many dead bodies.

And the pity is, they "know" they're right.

I think they should implement their plan Right Away.

Start a 'knocking on doors and getting ventilated on the spot' campaign !

Kid... Could you get that? Somebody's at the door.

Choudary backed down and didn't even try entering into the U.S. What a coward!

This intolerance and hate being perpetuated by Muslims against others must be stopped!

Note to self: stock up on ammo, bacon and Bibles.

I hate to break step, and heaven forbid that I offend, but I think that fashion statement should be adopted by:

Simply so we don't have to look at them anymore.