Facebook is going to start fact-checking, labeling, and burying fake news and hoaxes in its News Feed, the company said Thursday.

The decision comes after Facebook received heated criticism for its role in spreading a deluge of political misinformation during the US presidential election, like one story that falsely said the Pope had endorsed Donald Trump.

To combat fake news, Facebook has teamed up with a shortlist of media organizations, including Snopes and ABC News, that are part of an international fact-checking network led by Poynter, a nonprofit school for journalism in St. Petersburg, Florida.

News feed users will be able to label news they feel is false. 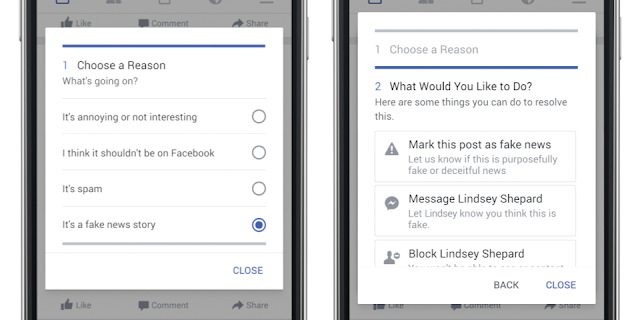 We can have some fun with this.

Nonetheless, it behooves all Comrades to faithfully adhere to established Party doctrine and to report any suspicious "facts" released into the internets by suspected conservative sources. These unapproved facts have already deprived Comrade Clinton of her well deserved Presidency and have destroyed Amerika's opportunity to be guided by her wisdom, grace and fundraising.

Fact checking with ABC - - or better still with CNN, provides an opportunity to reaffirm your love for Big Brother.

LL- and we all love Big Brother, don't we?

Facebork is using Snopes for it's main fact checking thing. Zukerberg needs to get a real job. I'd sell my facebork stock if I had any, or at least put a stop in. They're getting further and further from reality.

They've already messed mine up. By removing my farmer's markets, flea markets, grocery stores and restaurants. It's really annoying.
Making it harder to connect with family too.

I have had no doubt, since they announced the fake news, that they would be striking at all the conservative pages on their website. Just how bad remains to be seen.