We need look no further than Europe to see what unrestricted immigration has done to native populations and the negative impact to their cities, their economies, culture and criminal activity. A few countries are finally beginning to resist the flood of military-aged Muslim invaders and are building walls/fences to deal with this problem.

Hungary is providing an example of how strong fences insure good neighbors. For those who don't get it, a good neighbor is one that leaves you alone and does not interfere with your internal affairs.
From the Daily Caller:


BUDAPEST, Hungary — When other countries welcomed refugees with open arms, Hungary decided it was time to eradicate illegal immigration at any cost.

The country succeeded, but that success damaged relations with the European Union in the process.

Hungary’s second border fence has just been completed in the southern town of Asotthalom. The 96-mile long, 14 ft. tall double-line of defense doesn’t look too intimidating from a distance. Go a little closer and you’ll notice several layers of razor-wire capable of delivering electric shocks, cameras, heat sensors and loud speakers ready to tell migrants they’re about to break Hungarian law if they as much as touch the fence.

The invasion of Hungary was quelled by a fence and rigorous enforcement. The results? In just a week it went from 4,000 to almost 9,000 illegal aliens a day to just a few dozen as shown below. 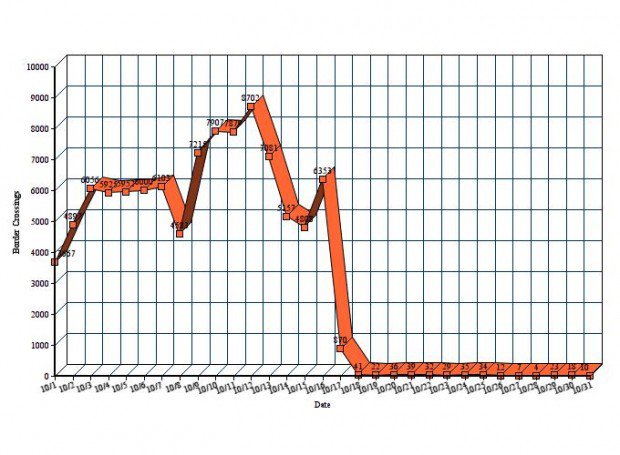 Build the wall. Build it now and patrol it vigorously.

It's not in the US Budget. Maybe next time.

LL - apparently this budget is only good through 30 SEP 17. Who knows? There could be funds for at least some of it before then. There are several contractors building their wall prototypes hoping to get federal approval. It could very well be next year before they are ready anyway.

Hungary and a couple others have got this thing figured out. Let them shine like beacons in this breed out war from the moslem vermin. I think most people will eventually get it. Except for merkel, she's still waiting for the moslem vermin who is willing to rape her.

Take the money from planned parenthood to build the wall.
Hungary had reason to get it right. Now if only we could.

Kid - Merkel is like every other corrupt politician, so follow the money. I'll bet Soros' nasty fingers are intertwined with hers.

I think that is the one that would actually lean in toward Mexico and cut the fingers of anyone who tried to climb it?
I think he was on the news.
And California says they will put him out of business or some such if he does build it.
Go figure.