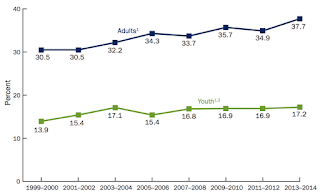 Thank you to your daughter for her service.

As someone who has struggled with weight issues before I can tell you having commercials popping up on our televisions depicting succulent treats and having fast food restaurants on every corner doesn't help those with a weakness for food.

People don't realize how years of reckless abandon can affect their health. Their so-called "comfort food" can turn their lives into a healthcare nightmare.

Don't believe me? Ask anyone with diabetes. They'll set you straight.

Incidentally, the article you linked to described blacks and Latinos as being disproportionately more obese than other ethnicities. These two demographics also have a 40 to 50% higher incidence of diabetes.

We are, indeed, heavily surrounded by food and chefs in restaurants, eateries, TV programs/TV contests,you name it. It doesn't help us stay healthy. Dieting is not for the weak of character; it's a long, demanding process.People get frustrated and choose what looks like a short way: surgery, but this has its risks.

Americans have had a non-laborious lifestyle for a good long time. I think something else is at play here. GMO's? Don't know.

My weight problem started when I stopped smoking, gained 50 pounds. Curse you heart attack! Once my sense of smell returned I discovered that my wife was actually a really good cook. The pounds just don't come off like they used to.

She and I both go on and off diets ... yet we know it is a matter of changing your life style that does the trick. I don't have three babies and a c-section to blame though.

Pictures of my late father's generation in their first uniforms show a bunch of underweight depression era teenagers not fit to fight. In June 1956, President Eisenhower created the President's Council on Youth Fitness with cabinet-level status so that we wouldn't be caught off guard if the Soviets blitzed us. After Vietnam, physically fit youth, ready for battle, became quite unpopular. Now we have a generation of overweight, out of shape kids unfit for combat, the opposite of the situation in the 1940's. Now we have to dedicate resources for weight loss. My nephew was once put in command of the "Fat Boy Platoon" to get them in shape for Basic Training.