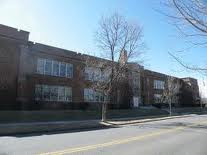 A New Jersey school district is closing an elementary school named after the President.

ASBURY PARK — The state fiscal monitor who oversees financial operations in the school district Thursday morning ordered the closing of the Barack H. Obama Elementary School as of July 1.

Students next year will go to the district's two other more modern elementary schools -- Thurgood Marshall on the east side and Bradley on the west side.

Bruce Rodman, the monitor, made the decision after the school board in recent weeks failed to support a plan by Schools Superintendent Denise Lowe to reconfigure elementary grades to create early childhood learning centers in the district, a plan which would have kept the Obama school open.

Eerily prescient, the school is being shut down because of someone's poor performance and/or incompetence. Barack Obama Elementary School - FAIL.

Even better, the last name of the person who ordered the closing is "Rodman."

It would be a better world if all the schools with that name were shut down.

This just in from the New York Times...

FRANCE HAS SURRENDERED TO LYBIA

"They're keeping Karl Marx Middle School open"
No, Vicar. Didn't you read the post? They are closing down Barack H. Obama Elementary school! :)

Odie - it would be a better world if that name never existed, eh?

Vicar - Fwance held on as long as they could but Gaddaffy's forces made another end run around the Marginot Line using three dozen bicycles and an armored jogging stroller pushed by a goat.

The Fwence ran out of bullets, bayonets, balls and baguettes.

Gotta love this one.

And nothing of value was lost

Hi,
your name became from a triller?
very nice blog!
show up any time...
Gus

Gus - thanks for stopping by