Accessories turn a few basic outfits into a smorgasbord of fashion, so why not do the same with your .380? 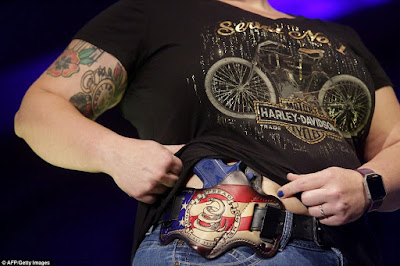 In perhaps the most American form of haute couture - the National Rifle Association put on a concealed carry fashion show.

From purses to gun holsters, attendees of the gun ownership and self-defense convention in Milwaukee, Wisconsin were treated to what the NRA said was the first-ever show of its kind.

Models displayed offerings from roughly 30 companies on Friday night, such as Femme Fatale and Man-Pack, whose products include corset holders and shoulder bags designed for quick gun access.
Ahead of the event NRA spokesman Jason Brown said: 'It's going to be really, really interesting to see all of these different products up on stage and modeled by people.'

Amanda Suffecool conceptualized the fashion show and the NRA worked with her to host it at the NRA Carry Guard Expo.

This is the first time the NRA had hosted such an event.

The last place I would ever consider carrying my pistol would be in my purse.

They need to carry something more lethal than blue plastic training weapons. I mean, sure, you could throw it at your assailant, but it seems to miss the point!

Diogenes - I tried it once myself. The hammer of my S&W .357 snubnose Combat Masterpiece got caught up in my Louie Vuitton cellphone pocket.

Mike - I wonder if I painted my guns that exact shade of blue, would they let me carry them on a plane?

Sig, if you can put a thick enough coat of paint to get 'em past the magnetometer, more power to you! I just paint the tips of the barrel orange to show everyone that they're perfectly harmless!