No More Love from Europe?

Do you remember back during the campaign for president when Barack Hussein Obama was the darling of Europe? Remember the Nazi style rallies in Europe when "The One" paraded himself in front of adoring Europeans?
The blush is definitely off the rose, ladies and gentlemen. The U.S.-EU summit has been held in one form or another since 1991 and no U.S. president has skipped a meeting in 17 years, until now. The U.S. State Department has confirmed that President Barack Obama canceled his trip to the U.S.-EU summit scheduled for May 24-25 in Spain.
Now we need to ask ourselves why. 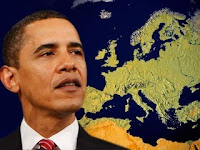 Is it because Der Spiegel wrote that Obama is Finished?
Is it because European leaders make fun of Dear Leader in the press?
Is it because Barack Hussein Obama is not really all that welcome to return to
France and England?
I'm not sure, but allow me to speculate, relying on other analysis as well.
By canceling his attendance at the U.S.-EU summit, Obama is sending a message that his willingness to talk to Europe will no longer be the default setting. (You don't love me -- well I don't love you either!)
The last time a U.S. president did not attend the summit was in 1993. It's one of those things you go to if you're the President. Even Pres. GW Bush attended when he was ticked at the Franco-German opposition to the Iraq War.

Obama’s campaign promise to engage Europeans in a joint effort in Afghanistan has largely fallen on deaf ears in Europe. So maybe this is his way to PUNISH the Europeans since we know that nobody can get anything accomplished anywhere in the world unless He is personally involved. (Obama Prediction: The Olympics in Rio will be a bust)
The US State Department said officially that Obama isn't going because — Obama never planned for the meeting. (huh?)
One other possibility is that Obama feels he's in trouble at home (no kidding) and plans to spend his time selling his domestic agenda. (he may be selling but the American People aren't buying)

The Europeans are not fools. Who in their right mind would take the executive team of Barack Hussein Obama and Joe (Slow Joe) Biden seriously? Certainly not:
Iran, Saudi Arabia, China, Japan, any of the Europeans, South Americans, or the Eastern Europeans (who he betrayed). The Russians consider him a pariah, and I have a hard time arguing with their logic. The Queen of England won't invite him back anytime soon - and he has yet to insult the New Zealanders.
The only bright shining spot on the planet is AFRICA, where both the despots and the people are still very proud of Barack Hussein Obama (based on race and his willingness to give them free money courtesy of the US Taxpayer).
Posted by LL at 12:05 PM

It's mind boggling that Obama won't go to Europe, the absolute model of what he is trying to turn this country into...

Perhaps he's waiting for a curtain call from his last apology tour...

Trust me, Beck's and O'Riley's "Bold & Freh" tour would sell out quicker in Europe than this buffoon's...

that "punishment" is the same as punishing a teenager with 3 day suspension from school.

Obama's plan for changing America requires no input from nations who do not worship nor honor him.

The whole world is laughing at this stupid bastard.

He can't control THEIR media (which happens to be in agreement with FOX and at odds with the main stream in Obama's pocket media), so he can't face them. They all know he's a bufoon with no experience.

The man's as useful as a styrfoam cup with no bottom.

He's none too fond of going anywhere that he doesn't have adoring throngs of people chanting his name.

Maybe he should spend more time in Africa. But he needs to take Slow Joe with him...and Pelosi...and Reid...and Murtha...and Boxer, etc.

Maybe Soros will move to Africa too? Naah. The place is a cess pool. Soros isn't that stupid.

LL< "Maybe he should spend more time in Africa"

Are you suggesting a black man go back to Africa...where we was born?

Or so his grandmother says. HA! Yes, I am one of those people who is not, and won't be, convinced that he is elligable to be POTUS in the first place.

So Obama is not making friends and influencing people in Europe?

But he promised that the dulcet tones of his voice would convince them all to love us again.

He's apparently not one of the people they've been waiting for.

We are the ones he's been waiting for.

Nice article LL. I've noticed for some time that the Europeans seem to have turned against him. Someone (can't remember who) said the other day, "apparently the only thing the Europeans like less than a strong US President is a weak US President."

Copenhagen seems to have been the final nail in the coffin.

And for a President who's shown zero interest in foreign affairs, it will be interesting to see if he tries to fix this relationship or just uses it as an excuse to stop worrying about foreign issues?

Obama will soon don the ill-fitting cloak of Patriotism.

I think that he may have run out of people to bow to, or, maybe, even the Europeans have seen through his fail!

The Europeans are not fools. Who in their right mind would take the executive team of Barack Hussein Obama and Joe (Slow Joe) Biden seriously? ..time has come today!!

Nick is prescient. Patriotism is his next act.

If he wants credibility, let him open up his personal life, college transcripts, let's get somebody we KNOW is independent go through his past life (and myriad of lies about same).

That's where we can start.

Maybe let the Europeans do the investigation.

And I'm not suggesting the Barack Hussein Obama go to Africa to live. It's simply the only place on the planet where people seem to worship him and we know that's important to him.

Patriot is as Patriot does - Let's see him roll back the spending and cut the size of government if he wants to put on that "ill fitting mantle"...

Obama is scrambling. Only a year ago he wanted to make a deal with Russia to cut back on nuclear weapons.

Now he has done a 360 and wants to increase fnding for nuclear weapons research.

"Greg Mello, director of the nuclear watchdog Los Alamos Study Group, said budgets have increased in recent years, but the nation "hasn't seen any increase in weapons activities like this since the early years of Ronald Reagan."

He called the budget "a complete surrender to Senate Republicans," who have argued that stockpile reductions must be accompanied by a modernized nuclear weapons complex."

very good your blog and like much of their material. I am very honored to have him as a follower of my blog.
Hugs

Maybe they can't get an electrical converter for TOTUS. Europe runs on 240V power if I remember correctly. Perhaps the last converter fried.