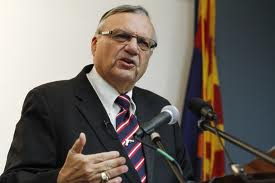 If the Sheriff has evidence that a crime has been committed, submit everything to a grand jury and let the subpeonas and warrants be issued.
Posted by sig94 at 9:33 PM

The Dems will start to laugh soon; they always do that when they're wrong.

This is going nowhere. Few in the United States care about the Constitution.

iT WOULD SEEM JURISDICTION WOULD BE A PROBLEM. damn caps lock

But, based on such evidence, states such as Georgia who are pursuing a similar line to have oblammy removed from their ballot for the 2012 elections might just have a bit more firepower to do so.

I guess that's something...

So, I guess with the New Improved Blogger, you have no way of telling the assholes at google, that you want to have email sent to you when other people post on a blogger post in which you've commented.

In the oblammy world, I guess that's a F improvement.

I would look for an impeachment to follow. I'd even wait for a posthumous one.

WoFat - The Dems and media will pretty much ignore it just as they did recently in GA.

Bill - In the final analysis I believe you're right. It's just that Hope springs Eternal, especially just before the homeless psycho pushes you under the train.

Right now it's time for bread and circuses in America while Caligula parties in the White House and ravages the Constitution. But remember, tyrants usually reign for a short while; in Caligula's case, three years and ten months before his own Praetorian Guard slew him.

In the best of worlds, Sheriff Joe needs to find an Arizona judge that refuses to be bought and that will not dismiss the indictment outright.

Sheriff Joe certainly is no fool, I believe he knows what the next few steps will be and has already scripted them.

Jurisdiction? The best case senario would be that a Maricopa County DA runs with it and impanels a grand jury that subsequently indicts Obama for fraud and Constitutional buggery, whatever - just get the warrant issued! Once an arrest warrant is issued, Obugger can no longer step footin Arizona without being arrested.

A Maricopa County arrest warrant is a court order for all police officers in the State of Arizona to arrest someone and bring him before the Court to face criminal charges as specified in the warrant.

Shockgrubz - What was so disappointing in Georgia was that an administrative law judge dismissed the case after a hearing.

I can only imagine the immense pressure brought upon that judge from the hiogest levels of the State. And that still could happen in Arizona.

But I think not.

Apparently there is no love lost between Obugger and Arizona Gov. Jan Brewer. I would love to hear the conversations between Sheriff Joe and Jan Brewer - you just KNOW they're talking!