MOAB vs MOP vs The Cloudmaker

The Massive Ordnance Air Blast, GBU-43/B or MOAB, was just used to shatter a network of tunnels used by ISIS in Afghanistan. This is a thermobaric munition that uses over pressure to kill people and break things. It is over 30 feet long, 40 inches wide and weighs 21,600 pounds (almost 11 tons). The explosive power (energy) of this device is 46 gigajoules (billion joules) or almost 13,000 kwh. A joule is the energy required to send an electrical current of one ampere through a resistance of one ohm for one second. 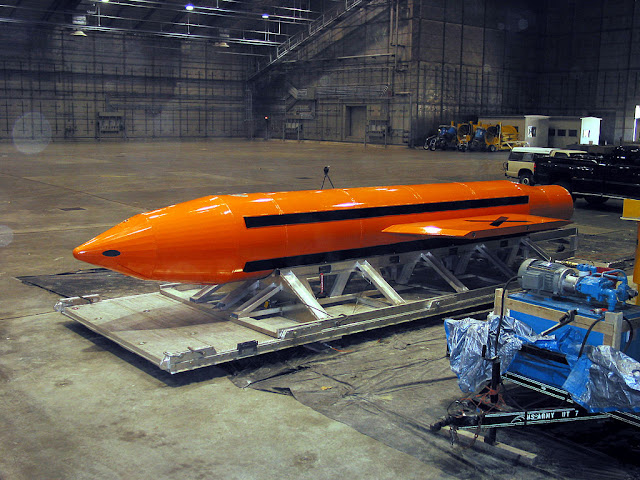 A joule is an amount of energy and a watt is a rate at which energy is used, defined as 1 W = 1 J∕sec The Hoover Dam produces an average of 4.5 billion kwh of electricity per year. When detonated, the MOAB releases the same amount of energy as the Hoover Dam produces in 1.5 minutes. While that doesn't sound like much, consider that a 10-ton truck traveling at 100 mph generates only 10 megajoules upon impact. The MOAB delivers an impact 460 times greater.

The Massive Ordnance Penetrator, GBU-57A/B or MOP, is a munition designed to defeat deeply buried structures, as much as 200 feet underground. Intended to destroy Iraqi bunkers, It is 4 tons heavier than the MOAB. The MOP weighs 30,000 pounds (15 tons) is 20.5 feet in length and is 31.5" in diameter. It is armed with 5,300 pounds of high explosives, about half that of the MOAB.

Like the MOAB, it uses GPS guidance and egg crate vanes to bring it on target. Although the MOP has been successfully tested, it has never been used in a hostile action. There are probably twenty or so upgraded versions of these bombs ready for use. Reportedly the new versions weigh 37,000 pounds. 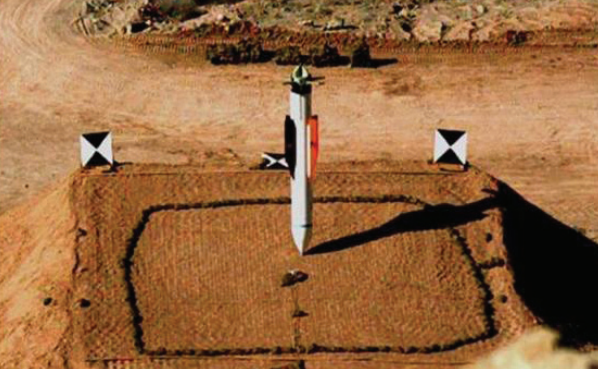 The Next Generation Penetrator (NGP) is being designed in a smaller, lighter configuration to enable it to be delivered by aircraft with a more conventional payload. The weight of the MOP is a major contributing factor to it's penetrating ability. The NGP may use rockets to give it a velocity (greater speed equal greater kinetic energy) that will achieve the same penetration.

Neither of these bombs approaches the weight of America's heaviest air borne munition, the T-12 Cloudmaker. The T-12 was a 44,000 pound bunker buster developed near the end of WWII. It was almost 17' long and 54" wide; designed to be carried by the B-36 bomber, two at a time. Nuclear weapons quickly made the T-12 obsolete. 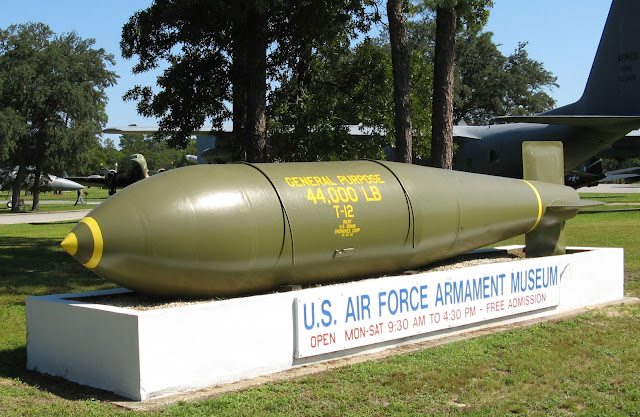 Pingpong (What my mind reads it as) would be a good place for MOPs and MOABS.

LL - I can think of no more appropriate use. Pyongyang is to underground bunkers what Scranton, PA, is to coal mine infestations.

Odie - we may have to change the "And the rockets' red glare, the bombs bursting in air" to "After the stealth bombers refuel, your cities turned into cesspools..."

Kid - get rid of the city's name; just label that part of the North Korean map "Target Rich Zones."

Wow. Thanks for the information. I must have missed the museum that that bomb made its home at. I don't remember hearing of it. Might need to look it up for a trip.

A Blessed Easter to you all.