Here's another swamp thing that needs to be yanked out of the water once and for all. From The American Mirror:


An Obama has joined the birther movement.

Except it’s not from Hawaii, but rather Kenya.

One of the issues that gave Obama a lot of confidence was that his place of birth might possibly be half a ocean away from Hawaii and the media, law enforcement and judges all covered for him. Any one who dared question Obama's claims to natural citizenship was attacked. Now let the narcissistic commie stew. Trump  is now in a position to quietly have the FBI send a few agents to Kenya to kick things around.

But wait, there's Comey he has to deal with. This could be another embarrassing cock up waiting for Trump to step in it. 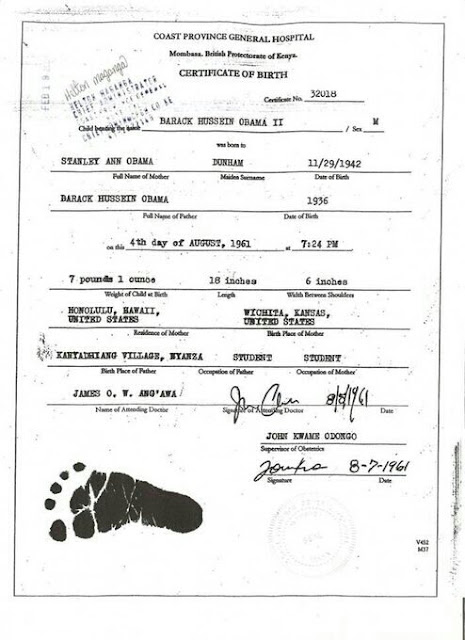 Obama's half brother posts a document (if that's what it is) that has a footprint. If true, this can be used to provide positive identification. I am not sure how you would get Obama to submit to having his right footprint taken, but waterboarding seems promising.

And why now? Sure, Malik most likely was warned to keep his mouth shut during the past eight years. With a change in administration there could be something afoot, a counter move to Obama's shadow government that seeks to discredit him. Could this be Trump's initial opening volley?

You know what? Ask Putin if he would send some Rooskie agents into Kenya to take a looksee. Let the Kenyans mess with the Spetsnaz instead.
Posted by sig94 at 8:53 AM

Just when you thought it was all settled science...

Now that you're retired, you could bird dog that. Kenyan vacation and all.

But I'm with you, Putin could do it a lot easier.

'I am not sure how you would get Obama to submit to having his right footprint taken, but waterboarding seems promising.'

He spends enough time at the beach; take a plaster cast of his footprints.

LL - If there's a hard copy of that Kenyan certificate that can be authenticated, he's toast. Impanel a grand jury and let the fun begin. Heads will be exploding for years. The weeping and wailing and gnashing of liberal teeth should be recorded for the enjoyment of future generations of conservatives.

Nate - unfortunately grains of sand are too large, it does not possess the resolution required for comparative purposes. I recommend he just mail his feet in (there's a duces tecum subpoena for that of course) and then join a disabled golf league. It'll help his handicap.