When cops would me what work I was doing with government grants, I told them I was a pimp and the Department was my stable of whores and the "john" was the state or federal government, whomever was fronting the money. The "john" wanted some action and was willing to pay for it. The cops then performed whatever the "john" wanted whether it was narcotics enforcement, juvenile delinquency prevention, domestic violence suppression, traffic enforcement or anything else. Even notifying immigration enforcement officers when an illegal alien is arrested.

To put it bluntly, we give the "john" the dough he needs to satisfy his fetish through our tax dollars and then have to perform like a circus monkey to get it back. Nice system. 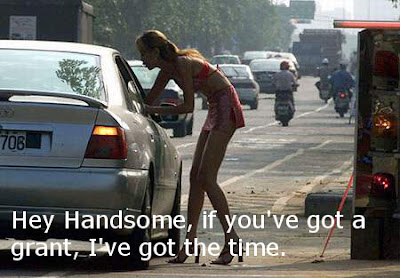 For years under the Obama administration the federal "john" didn't complain when he didn't get the action he wanted, which was the notification of illegal alien arrests. Money still changed hands and the jurisdictions got paid for non-performance.


Attorney General Jeff Sessions said Monday he’ll begin punishing sanctuary cities, withholding potentially billions of dollars in federal money — and even clawing back funds that had been doled out in the past.

Speaking at the White House, Mr. Sessions said his department is preparing to dole out more than $4 billion in funds this year, but will try prevent any of it from going to sanctuaries.

“Countless Americans would be alive today … if these policies of sanctuary cities were ended,” Mr. Sessions said.

Of course not all grant programs are a waste of money. But like all organized crime, the house takes it's cut, you gotta pay the vigorish and the government vig is a very healthy slice of the take.

So Sessions is cracking the whip and getting ready to slap some ho's.
More here.
Posted by sig94 at 8:00 PM

"but will try prevent any of it from going to sanctuaries."

Doesn't give me a warm or fuzzy.

and if people are violating federal law, why can't they be indicted. ?

It's a lot like income redistribution between the states. The federal government taxes, and takes a HEFTY chuck for managing the money that it took, then it doles it back to the states to dance like organ grinder's monkeys (dance bojangles, dance).

I'm not taking a shot at Sessions, but my sense was always that it would have been better if they hadn't taken the money in the first place and their 40% handling fee before they gave it back. I'm not taking a cheap shot at BJA either, but the structure by which the grants are handed back to the states, the MASSIVE overhead involved at every phase and the genuine lack of results would be shocking to most Americans.

Nowhere is this more aggravating than grants to universities (which is really a waste) where the university overhead sucks off 65+% of the money before it is applied to the situation intended.

It's like a daisy chain of parasites. But the whore/trick analogy works just as well.

LL - the last time I really looked into the grants authorized by federal law enforcement legislation, 85% stayed at the federal level. The crumbs that were left most often were formula grants and discretionary awards (Formula grants to states sometimes based on # of Part I crimes and how big your Senator's balls were). The discretionary grants were even worse as the awards were based on political or geographical considerations.

Kid - we both know that it's a nice thought but don't hold your breath on that.

Both my agency and that of my wife have benefited from the awarding of federal grant money over the past decade or so. My wife's agency has made some effort to comply with the requirements laid down, though much of it was "pencil whipping".

My agency has done a better job of compliance, though some requirements have had the envelope pushed.

I am not sure either has really had any impact on the root problems that caused the established of the grants in the first place. It appears to me that the whole grant system is merely a further expansion of reliance on the feds influence in local government. Maybe this will serve as a start on reducing dependence.

Either way, good to see this brought to the table, I am really enjoying the resultant gnashing of teeth and wringing of hands.

We all talk about cutting the government. People talk about the fed, but forget that before the fed obtained power (through the purse, and from "creating" income tax, which is actually illegal constitutionally, truly), it was the state which had the money and was just as bad, in some ways worse.

The thing is, has anyone heard of a nation that reversed course, becoming smaller? I'm not, exactly, saying there has never been such a thing, only that I haven't heard of such a thing. It seems that governments run their course, from small and mostly beneficial to behemoth and genocidal. Or one government form brings enough ruination to cause a hot or cold revolution, which usually makes so many promises that, to stay in power, it must begin eliminating people... both to steal from the rich and eliminate the poor.

I don't know. If Trump can wrangle the government to a lower orbit, with less power... if that is even truly his intent, the next steps in government get really ugly. Giving states more power, but in balance, and individuals too, is a way. But too much and we are back to why the feds were allowed to get bigger in the first place... because the tics of state government were out of control. Bleh. :p

Oh, hey, Sig? It's great that you have the time to respond more often. Sometimes, I suppose, it's like playing hammer the weasels? :) Though you seem to do it rather civilly. Retirement must be... going well. Cheers.

Capt. Schmoe - I've probably administered $45-50 million in state and federal programs over the years. It all depends on how the department wants to use the funding. I've seen grants that were nothing but a means to bump up cops' pensions, hardly any worthy results at all. Others make a good impact, in particular I like those that emphasize inter-agency cooperation and criminal intelligence collection and dissemination.

Doom - Yes, since my retirement I do have more time, a lot more, to spend on my blog. And to dig a little deeper into a few of my interests. But ... there's a honey-do list that is growing as the weather gets warmer and I finally started working out again. Turning into more of a fat blob was not in my plans. Gotta loose the weight I gained when I stopped smoking.