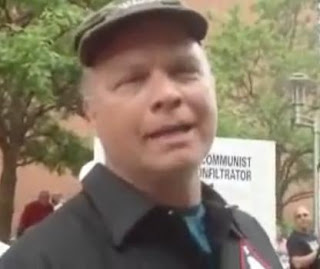 Help Jim Hoft identify this melonhead. Watch the video at the link. If this demented drooler represents our opposition, we've already won. What are the chances that he's an SIEU grub?
Posted by Rhod at 6:25 PM 15 comments:

I have just received word that the New York Times is preparing to go public with a list of names of Americans covertly working in Afghanistan providing force protection for our troops, as well as the rest of our Coalition Forces. If the Times actually sees this through, the red ink they are drowning in will be nothing compared to the blood their entire organization will be covered with. Make no mistake, the Timesis about to cause casualty rates in Afghanistan to skyrocket. Each and every American should be outraged.
(More...)
Posted by Anonymous at 4:44 PM 18 comments:

How Bad Could 2010 Really Get For Democrats?

How Bad Could 2010 Really Get For Democrats?
Though Election Day is still months away, pundits have already begun to speculate on possible outcomes for this year's midterms. There's a general consensus that Democrats will lose seats in November, but beyond that opinions vary widely on how big those losses might be. Some argue that because of the advance notice, passage of health care, and an improving economy (or some combination of all three), Democrats will be able to limit their losses significantly. Others are predicting a repeat of 1994, when Democrats lost 50+ seats and control of the House.

So how bad could 2010 get for the Democrats? Let me say upfront that I tend to agree with analysts who argue that if we move into a "V"-shaped recovery and President Obama's job approval improves, Democratic losses could be limited to twenty or twenty-five seats.

That said, I think those who suggest that the House is barely in play, or that we are a long way from a 1994-style scenario are missing the mark. A 1994-style scenario is probably the most likely outcome at this point. Moreover, it is well within the realm of possibility - not merely a far-fetched scenario - that Democratic losses could climb into the 80 or 90-seat range. The Democrats are sailing into a perfect storm of factors influencing a midterm election, and if the situation declines for them in the ensuing months, I wouldn't be shocked to see Democratic losses eclipse 100 seats.

A man lays his career on the line

Lt. Col. Terry Lakin, MD is to face a court martial for his refusal to obey deployment orders, pending proof that it is a lawful order, issued by a commander in chief who meets the constitutional requirements of office. Dr. Lakin explained his refusal in an article published April 8th on American Thinker. The American Patriot Foundation writes:

Army doctor Lt. Col. Terrence Lakin yesterday met with his brigade commander, Col. Gordon R. Roberts, who proceeded to read LTC Lakin his Miranda rights, and who informed LTC Lakin he had the "right to remain silent" because LTC Lakin is about to be charged with serious crimes. Col. Roberts was at age 19 awarded the Congressional Medal of Honor, the only recipient of the nation's highest honor currently on active duty in the Army.

LTC Lakin had previously been ordered in writing to report yesterday to Ft. Campbell, KY and then on to deploy for his second tour of duty in Afghanistan. Lakin refused to obey these orders and instead came to work yesterday morning at the Pentagon. Late yesterday afternoon he was confronted by his brigade commander.

Before the meeting was over, LTC Lakin's Pentagon Access Pass had been revoked, and his laptop computer was set to be confiscated.

The message to LTC Lakin is clear; through official channels, he was informed yesterday that he will shortly be court-martialled for crimes (specifically, missing movement and conduct unbecoming an officer) that for others has led to lengthy imprisonment at hard labor.

Lakin has announced in a YouTube video that has now been viewed more than 110,000 times that he considers it his duty to refuse to obey orders that would be illegal if President Obama is ineligible to hold office.

Meanwhile, cries mount for proof of that eligibility, but nothing has been forthcoming. The Obama campaign at one point released a copy of computer-generated abstract of information purportedly in Hawaii's records system, but the source of this information is unclear and need not have been a birth certificate issued contemporaneously and signed by the doctor who attended the birth. Even the document released was only a copy, and the version printed in the Los Angeles Times on June 16, 2008 is on a form only in use since late 2001. Even as it is, the document contains a warning that it is merely "prima facie"--threshold, rebuttable and thus inconclusive --evidence of birth, and the copy the Times printed mysteriously has the certificate number blacked out, thereby rendering the document unusable according to language on the bottom.

Given the seriousness of the offenses with which LTC Lakin is about to be charged, the American Patriot Foundation today renewed its plea for donations to its legal defense fund for LTC Lakin. Details are available at APF's website, http://www.safeguardourconstitution.com/.
Posted by Anonymous at 9:55 PM 12 comments:

On Thursday, there will be Marxists out to disrupt the Tea Parties

Rumor has it that Barney might be about to RETIRE. To spend more time with his family, no doubt, or to pen his memoirs.