It's been a rough week for the law enforcement community.

EOW - Run over by fleeing suspect.

Email ThisBlogThis!Share to TwitterShare to FacebookShare to Pinterest
Labels: Cops, End Of Watch

God Gathers His People For The Latter Days

The rise of anti-Semitism throughout Europe is just another indication that our time here on Earth grows short. God is preparing the battleground for the End Days.

Attacks on Jews in France have redoubled Israel's efforts to bring her children back to God's Promised Land; just as prophesied by Jeremiah.


Immigrant Absorption Minister Ze'ev Elkin on Friday called on French Jews to make aliyah to Israel following the beheading attack in the country.

"Come home! Anti-Semitism is growing, terrorism is on the rise and the sickly ISIS activists carry out murders in the light of day. We are prepared to accept the Jews of France with open arms," he said.

"All the forecasts are expecting waves of immigration. I am very glad that the Ministry of Immigrant Absorption centers at the Ben Gurion Airport will be working overtime this summer. The government has provided special budgets and will double them if necessary, this is a primary national mission," added Elkin.

Elkin is merely one of God's tools in accomplishing His will.

Jeremiah spoke of this at the very end of chapter 30 when he wrote:


"In the latter days you will consider it."


“At the same time,” says the Lord, “I will be the God of all the families of Israel, and they shall be My people.”


Behold, I will bring them from the north country,
And gather them from the ends of the earth,
Among them the blind and the lame,
The woman with child
And the one who labors with child, together;
A great throng shall return there.

From the Roman destruction of Jerusalem in 70 A.D until 1947, there was no Jewish nation and the world's Jews were scattered. Today, more than half the world's Jews live in Israel. Israel's efforts to bring all French Jews are long standing as shown in this AP article from June, 2014.


PARIS (AP) — Increasing numbers of French Jews are leaving for Israel, citing dim economic prospects and a sense of being caught between an increasingly influential far right and militant Islam. More than 5,000 are on track to leave this year, the most since after the Six-Day War in 1967.

Israel, seeing the influx as a success, is doubling down on its efforts to attract Europeans, planning to dedicate $29 million over two years to bring in new immigrants.

France has the world's third-largest Jewish population after Israel and the United States - about 500,000, according to rough estimates. The country bans any official documentation of a person's race, religion or ethnicity in a law with roots in French shame over its collaboration with the Nazis.

This does not bode well for France and the rest of Europe, nor indeed any country that strives to drive out God's people. I believe one of the reasons why America was blessed for 200 years was because we allowed the Jews to live here in peace.

We will ultimately face the same thing as the Muslim hordes continue their Obama/DNC inspired invasion. As these heathen Mohammedans (that's what they used to be called) become more numerous, expect to see anti-Semitic activity take a drastic uptick in America. They are driven by Satan's insane hatred of Jews - the people who bore the Messiah, the instrument of Satan's ultimate defeat.
Posted by sig94 at 11:30 PM 2 comments:

Druze In The News 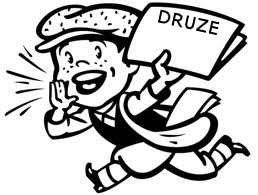 I have heard of the Druze. To be honest, I never gave much thought about them until now. The Druze are a minor ingredient in the seething stew-pot that is the Near East. Apparently a bunch of them ambushed an Israeli ambulance carrying several wounded men and beat one of them to death.


Earlier this week, on the Golan Heights, an enraged mob assaulted an ambulance and attacked two wounded men inside with rocks, clubs, and chains, killing one and seriously wounding another.

The ambulance was Israeli. The wounded men were Arab fighters from Syria. The assailants were also Arabs, though they were Druze rather than Muslims.

Rocks, clubs and chains. Sounds like a Baltimore prayer meeting.

But who in the wide, wide world of pain (I'll take primitive assault weapons for $400, Alex)  are the Druze? Wikipedia says this:


The Druze revere the father-in-law of Moses, Jethro, whom some Muslims identify with Shuʻayb. According to the biblical narrative, Jethro joined and assisted the Israelites in the desert during the Exodus, accepted monotheism, but ultimately rejoined his own people. The tomb of Jethro near Tiberias is the most important religious site for the Druze community.[

That doesn't tell us much.


The Druze ... are an esoteric monotheistic religious community found primarily in Syria, Lebanon, Israel, and Jordan. The religion incorporates elements of Ismailism, Gnosticism, Neoplatonism and other philosophies. The Druze call themselves Ahl al-Tawhid "People of Unitarianism or Monotheism" or al-Muwaḥḥidūn "Unitarians, Monotheists." Sheikh Amin Tarif was the preeminent religious leader of the community until his death in 1993.

That .....  really doesn't help much either. No matter, whatever they believe, the Druze are very active in the Israeli military and in politics. One of them served as the acting President of Israel in 2007 and the Druze play major roles in the IDF.

As there are about 130,000 Druze scattered throughout Israel, the Golan Heights, Lebanon and Jordan, they find themselves on different sides of the current conflict.

They make political alliances with whomever is in power, this is how they survive. The Syrian Druze allied themselves with the Assad regime, the Jordan Druze with the King and the Israeli Druze with the Israeli government. So the Druze find themselves at odds even with their own brethren. This happens when you are are a very small minority in a region that is not well known for tolerating people with different beliefs ... except in Israel. The Druze have done very well in Abraham's Keep.

But why did Israeli Druze attack an Israeli ambulance?


So when an Israeli ambulance drove down the street carrying wounded fighters from the Free Syrian Army, some of the local Druze fingered those people as enemies. They are a potential threat to the continued existence of their Druze brethren on the other side of the border since a victory by the Free Syrian Army would lead to the downfall of Assad and the possible enthronement of Al Qaeda or ISIS, whom the Druze couldn’t curry favor with even if they wanted to without abandoning their religion and converted to Islam at gunpoint.

So some of them decided to attack the ambulance and take a perceived enemy or two off the board even as the Israelis were trying to save them.

In the politico-religious mess that is boiling in that region, I guess it makes as much sense as anything else. Unfortunately this happened in Israel.
Posted by sig94 at 8:00 PM 2 comments:

Email ThisBlogThis!Share to TwitterShare to FacebookShare to Pinterest
Labels: Druze, In The News, ISIS, Israel, Murder, Syria, the Near East

One Down, One More To Go

Escaped killer Richard Matt was shot and killed by the State Police deep in the woods of upstate New York on Friday afternoon, law enforcement sources told The Post.

The other fugitive, David Sweat, was being hunted by the cops in the wilderness area around Lake Titus — about 50 miles west of the Dannemora prison from which they escaped on June 6.


One sadist murderer is dead and NY taxpayers save about $45,000 a year, the cost to house a prisoner.

Even considering all the police overtime, it's win-win.
Posted by sig94 at 4:58 PM 5 comments:

Email ThisBlogThis!Share to TwitterShare to FacebookShare to Pinterest
Labels: Crime and Punishment, Murderers

Another DOCCS employee has been arrested and charged with aiding in the escape of two convicted murderers from the Clinton Correctional Facility in upstate NY. And now the State Police think that the escaped prisoners are armed.


Mr. Palmer’s arrest came as law enforcement officers searched 75 square miles of densely forested terrain on Wednesday in pursuit of the two escaped murderers. The New York State Police said investigators are working on the assumption that the pair had a firearm.

The inmates, who the police believe were at a hunting cabin near Owls Head, N.Y., around 10:30 a.m. on Saturday, would most likely have found a supply of weapons there, Maj. Charles E. Guess said at a news conference on Wednesday.

The cabin contained items with DNA matching that of the two killers, Mr. Matt, who turns 49 on Thursday, and Mr. Sweat, 35, and Major Guess said a man arriving there reported seeing “someone fleeing into the woods.”

Investigators had no conclusive evidence that the inmates took a shotgun from the cabin but were operating as if they were armed, in part because almost every hunting cabin in the North Country had at least one weapon, Major Guess said.

Now I'll have to get bigger hats... 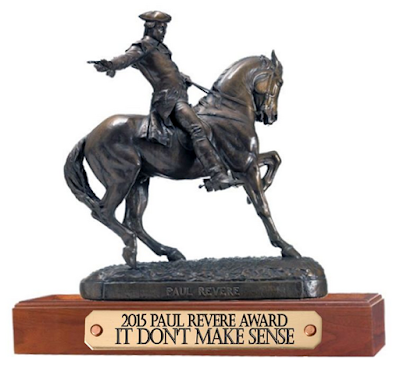 I really, really appreciate this award.
I never expected it in a million years, and the $100,000 lifetime annual allotments that come with it is just icing on the cake.

Email ThisBlogThis!Share to TwitterShare to FacebookShare to Pinterest
Labels: music, The Knickerbockers


Time to revisit the FBI 2013 Uniform Crime Report, Expanded Homicide Data Tables 14 and 15. These tables capture the number of felons killed while committing a felony- killed by police and private citizens. From 2009 through 2013 there was an average of 703 felons killed each year, 420 by police and 283 by private citizens. This mean that armed citizens are responsible for taking down 40% of violent felons in the US during the past five years.

Armed citizens do not have to quake in bedrooms waiting for some crazed individual to snuff them out. Who knows how many others were spared (mom's, children, innocent bystanders) because someone had the right and common sense to arm themselves.

For this same five year period the following is true:

These statistics do not include the use of other firearms such as rifles and shotguns.

People like Karl Rove want to see that end.
Karl Rove would like to see another 172 or perhaps even 200 innocent lives added to the nation's murders each year so that he can feel safe.

Welcome to the mainstream GOP's War on Guns.
They'll have the same success as the War on Poverty and the War on Drugs.
Idiots.
Posted by sig94 at 8:30 PM 2 comments:

NY Legislature To Vote On Repeal Of The SAFE Act

New York State Republicans, at least some of them, are holding hostage the NYC rent control legislation that Gov. Andrew *spit* Cuomo really, really wants in order to repeal the unconstitutional SAFE Act passed in a shameful midnight session in January of 2013.

We need to get our act together to get the leg to pass this. Meanwhile, a 5-day extension was granted to protect renters from being evicted if the rent control law is not passed. This law affects 2 million renters in NYC. The SAFE Act diminishes the rights of 6 million gun owners. Who will get served?