Whatever Putin Wants, Putin Gets Howdaya like these apples? Russian President Putin swipes the Super Bowl ring from the owner of the NE Patriots!


New England Patriots owner Robert Kraft revealed the real story behind a 2005 meeting with Vladimir Putin, during which the Russian president pocketed his Super Bowl ring, worth more than $25,000. Kraft, at the time, claimed the diamond-encrusted bauble was a gift, but he now admits Putin stole it, and the White House intervened when he demanded it back.

Kraft explained the incident happened while Sandy Weill and other business execs were in St. Petersburg. “I took out the ring and showed it to [Putin], and he put it on and he goes, ‘I can kill someone with this ring,’ ” Kraft told the crowd at Carnegie Hall’s Medal of Excellence gala at the Waldorf-Astoria.“I put my hand out and he put it in his pocket, and three KGB guys got around him and walked out.”

And Bush43 simply told Kraft to write it off as a gift.

Remember how Bush and Pooty were BFF after their star-crossed first meeting?


"I looked the man in the eye. I found him to be very straight forward and trustworthy and we had a very good dialogue.

"I was able to get a sense of his soul."

Bush must have been on his knees, gazing adoringly up Pooty's ass.
Posted by sig94 at 8:00 PM 3 comments:

How About Arresting Him When He Returns? 
The Muslim Lawyers Association in Johannesburg wants US President Barack Obama arrested and tried for war crimes when he arrives in South Africa on June 29.

It submitted a 600-plus page document to the Office of the National Director of Public Prosecutions on Friday asking for an investigation into Obama's involvement in the Middle East.

In terms of the Rome Statute, South Africa has the right to prosecute a war criminal on its territory, said Tayob.

The lawyers cite a report prepared by the New York University School of Law and Stanford University Law School in which they found that:

The study also shows that for every terrorist killed by a drone attack, 49 civilians are also killed.


The DNC has already initiated a web site dedicated to soliciting donations for Obama's bail. They are advertising a Captain and Crew golf tournament. Donations are $250,000 per player.

For Her Thrills, Shrill Hill Spills That She Fills The Bill With Jill 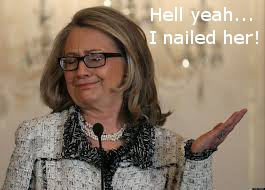 Perhaps Hillary and Bill Clinton were fighting over the same women?

Hillary will supposedly tell all in her soon to be released book.

Hillary Clinton, according to the media, will soon publish her memoirs, and in them salacious details of her life, reports Daily Mail. Namely, former first lady admits that she is bisexual, that she fears she might die of brain cancer and that she disagrees with Barack Obama about the killing of Osama Bin Laden.

According to a source close to her publisher, Hillary decided to make this move as a prevention, because she plans to candidate herself in the presidential elections in 2016. She has allegedly already received $14 million for this book to be published.

According to the same source, Clinton has decided to admit that she is bisexual in order to garner LGBT voters.

“Hillary Clinton will recognize not only that she is bisexual but also that she had lesbian relationships,” the source said.


Joe Biden, also positioning himself for a run at the 2016 Presidential nomination, will be releasing his memoirs sometime after Labor Day. In his engrossing and engaging voyage of sexual self discovery, Biden reveals that he had relationships with a duck, two lemurs and an empty box of Chiclets. He seeks to garner the lobotomy block of voters.
Posted by sig94 at 9:30 PM 14 comments: 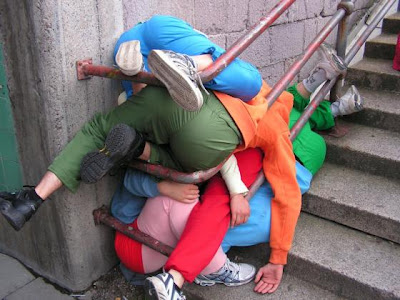 Stairway to the CIA parking garage.
"Watch your step now..."


Not much else on the story. He retired to spend more time with his family. Yep. That's the gloss everyone is using on this. But Hot Air gives a little more background on Morell.


The news broke within the last few minutes. If his name sounds familiar, it’s because Morell was the guy who signed off on the now infamous edit of the CIA’s Benghazi talking points that removed references to previous warnings about jihadi activity in the area. Is today’s resignation related to that, or is it related somehow to the NSA/PRISM/Snowden clusterfark?

Fox News is quoting his statement as saying “It’s time for my family,” but I can’t remotely believe this guy would quit now in the middle of a Category Five natsec hurricane knowing how suspicious it would look if he didn’t have a more compelling reason than that. Is he being squeezed out because there’s some more damning leak to come and the White House wants to get out in front of it by dispatching with the person or persons responsible? 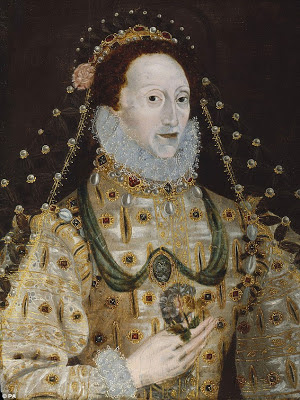 An interesting article from the Daily Mail:
There are centuries old rumors that Queen Elizabeth was a dude. The rumors allege that Elizabeth, the favorite daughter of King Henry VIII, died from illness at the age of 13. Her caretakers, afraid of being executed for allowing the princess to die (construed as an act of treason), dressed up a friend of hers, a local village boy, and passed him off as Elizabeth.


But there was a boy, from a local family called Neville. He was a gawky, angular youth a year or so younger than Elizabeth, who had been the princess’s companion and fellow pupil for the past few weeks. And with no time to look further afield for a stand-in, Parry and Lady Ashley took the desperate measure of forcing the boy to don his dead friend’s clothes.

Remarkably, the deception worked. Henry saw his daughter rarely, and was used to hearing her say nothing. The last time she had been presented in court, meeting the new Queen Catherine Parr, she had been trembling with terror.

The princess was known as a gentle, studious child, and painfully shy — not a girl to speak up in front of the king who had beheaded her mother.

Henry, who rarely ever saw her and was quite ill himself, bought the deception.


So when ‘she’ stood at Bisley manor, in the dimness of an oak-beamed hall lit by latticed windows, it was not so surprising that the king failed to realise he was being duped. He had no reason to suspect his daughter had been ill, after all, and he himself was tired and in pain.

The rest is history.

While this could be utter rubbish, it does make the  issue of her refusing to marry more understandable. She also refused to wear a bikini. Case closed....