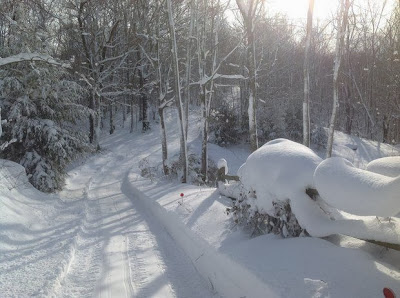 We didn't miss it by much. Just north of us got pounded. We got a few inches - a light dusting by upstate NY standards.


It was as they say, a good ol' fashion lake effect pounding -- a snowburst -- 60 to 72 inches of snow (confirmed). Put simply, they got hammered -- all of this while a major lake effect research project is going on east of Lake Ontario.

The band of lake effect snow that was east of Lake Ontario is now a shadow of its former self. It's south of Syracuse and has broken up into smaller bands of snow.

[...]In the wake of this lake effect event, parts of Oswego, Jefferson and Lewis Counties are now under 2 to 5 feet of snow.

1. SYRACUSE, NEW YORK “Cold,” “clammy,” “snowy” are three great ways to describe Syracuse weather—from October through April. Winter starts very early and lasts late, with plenty of snow and extremely cold temperatures. Winter daytime temperatures average in the lower 30s, with nighttime lows in the teens, but temperatures as low as minus 25°F have been recorded. Snow also makes winter uncomfortable in Syracuse, averaging almost 120 inches per season. During the winter of 2009–2010, Syracuse was again the winner of the prestigious “Golden Snowball Award,” celebrating the city with most snowfall for the winter in upstate New York, beating out such snowy cities as Buffalo, Rochester, Albany, and Binghamton. Syracuse also made our Farmers’ Almanac “10 Worst” list in 2002. Another reason why this city makes the worst winter weather list — December, January, and February are typically gloomy, with Syracuse receiving only one third of the sunshine possible, because of considerable cloud cover. 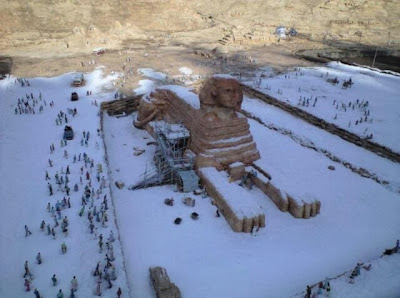 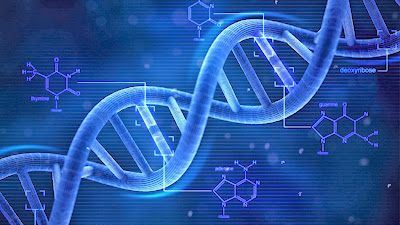 Seems that the evolutionists have been served another sticky wicket in their attack on those who believe in a divinely inspired Creation.


U.S. geneticists say a second code hiding within DNA changes how scientists read its instructions and interpret mutations to make sense of health and disease.

One, long understood, describes how proteins are made, while the other instructs the cell on how genes are controlled. One language is written on top of the other, which is why the second language remained hidden for so long, a university release said Thursday.

The more you open this mystery, the more you find out that you have more to unravel. Yet in their blindness they continue to attribute the unique qualities and capabilities of DNA to their goddess "Nature."


"For over 40 years we have assumed that DNA changes affecting the genetic code solely impact how proteins are made," UW genome sciences Professor John Stamatoyannopoulos said. "Now we know that this basic assumption about reading the human genome missed half of the picture. These new findings highlight that DNA is an incredibly powerful information storage device, which nature has fully exploited in unexpected ways."

Parts of the genetic code have two meanings, one related to protein sequence, and one related to gene control, the researchers said, and both apparently evolved in concert with each other.

The gene control instructions appear to help stabilize certain beneficial features of proteins and how they are made, they said.

This only strengthens the intelligent design community,

Why The World Is A More Dangerous Place


The American Thinker has an article on the decline and fall of American military might that includes this:


In addition to the meat-ax approach to America's naval, air, and ground forces required by the Sequester (which originated in the White House), the Obama Administration is reducing the Pentagon's budget by hundreds of billions of dollars. Obama is also slicing the U.S. nuclear arsenal.

Once all the military budget cuts are in place, the United States will have the fewest naval vessels at sea since before World War I, the smallest Air Force ever, and an Army and Marine Corps with severely diminished capacity. The nation will have only 300 or so nuclear weapons. The hollow military which we heard so much about during the Carter years will be back.

Instead, we spend trillions on soft social spending to reward generations of the sick, lame and lazy. There are billions to give to illegal aliens, AKA "criminals'" so they can attend our universities and obtain free medical care. There are more billions to give to rogue Muslim states who celebrate the deaths of our people. And of course there are hundreds of millions to give to our imposter president;s vacations to keep his wife amused. Every time this POS steps out of the White House it costs us another $10 mill.

It used to be that a robust US military enforced a Pax Americana. Now our ambassadors are murdered with impunity, administration officials refuse to testify regarding incompetence and malfeasance and the forces used to protect American interests abroad are reduced through sequester cuts just approved by the Republican controlled Congress.

The Angry White Dude has started filing his divorce papers form the Republican Party. I will not follow suit for one reason, and one reason only. When the Republican fund raisers call me for a donation I want the opportunity to tell then to go f*** off.
Posted by sig94 at 5:00 AM 1 comment: 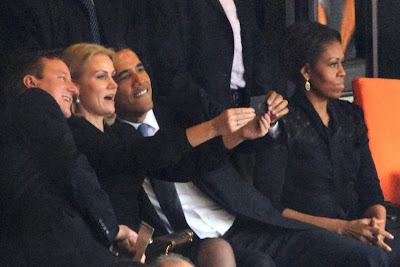 The New York Post's Andrea Peyser says that Obama owes us all an apology for his childish middle school behavior at Mandela's funeral service. Taking everything else this shameless imposter has done to this country, I'd say a prison sentence for treason would be more appropriate.


The president of the United States, leader of the free world, standard-bearer for everything upright, good and wholesome about the nation he leads, lost his morality, his dignity and his mind, using the solemn occasion of Nelson Mandela’s memorial service Tuesday to act like a hormone-ravaged frat boy on a road trip to a strip bar. 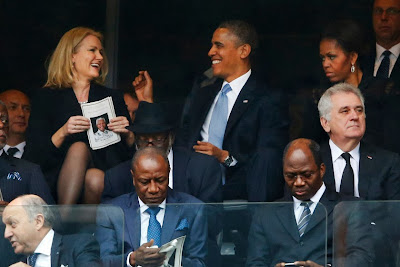 In front of 91 world leaders, the mourning nation of South Africa and Obama’s clearly furious wife, Michelle, the president flirted, giggled, whispered like a recalcitrant child and made a damn fool of himself at first sight of Denmark’s voluptuously curvy and married prime minister, Helle Thorning-Schmidt.

Not to be outdone by the president’s bad behavior, the Danish hellcat hiked up her skirt to expose long Scandinavian legs covered by nothing more substantial than sheer black stockings .

[...] Finally, Obama posed for an iPhone selfie with the Danish hottie and British Prime Minister David Cameron. Only after the damaging photo eruption did Obama get hold of himself and regain a dim memory of his marriage vows. He finally straightened his face and moved away from the gentle gams of the Danish object of his desire.

Eventually the scowling First Lady stepped in to restore order and decorum by separating the boisterous children. Even Prime Minister Cameron could not withstand the heat generated by Michele's glare. In the following photograph, he is no where to be found. Or perhaps Michele ate him. 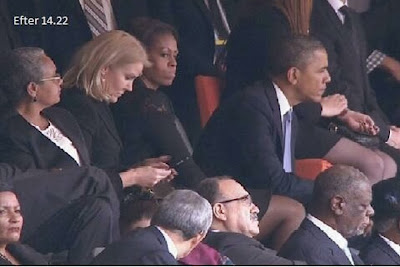 With the First Lady acting as monitor, the mourners spent the rest of the trip in proper introspective silence.
Posted by sig94 at 11:54 PM 4 comments:

Will We Get A Nelson Mandela Day??


Four US presidents, at least 50 other world leaders, some two dozen members of Congress, and many other notables will attend Nelson Mandela's memorial service Tuesday in a soccer stadium. With such short notice, it's a big challenge for the Secret Service and other agencies.

We have yet to hear from the CEO's of Goodyear, Goodrich, Firestone and other makers of fine quality necklaces as to whether or not they will also attend.


The “ceremony of remembrance” Tuesday will be held in the Soweto soccer stadium, which holds 94,000 people.

No mention was made in remembrance of the ashes of the tens of thousands of South Africans murdered by Mandela's ANC communists. However, the battle lines are being drawn for divvying up the profits to be made from Mandela's famous name. It is reminiscent of the squabbles that erupted after the deaths of another terrorist, Yasir Arafat, and pop legend Michael Jackson.


JOHANNESBURG (Reuters) - From political posters to bottles of wine and kitchen aprons, the face and name of Nelson Mandela are a potent commercial and political brand in South Africa. Little wonder it's so sought after - and the source of occasional squabbles.

Following his death on Thursday at the age of 95, the scramble for control of the Mandela legacy - both financial and moral - will involve his family, the ruling African National Congress (ANC), and the Nelson Mandela Foundation he set up to protect his broader message.

At stake is the inheritance that will go to Mandela's more than 30 children, grandchildren and great grandchildren, some of whom already use the Mandela name and image to market everything from clothing to reality TV.

There are also the Mandela brands and trademarks that help fund the Foundation. And for the ANC, Mandela's reputation as an anti-apartheid hero is worth votes for years to come.

Right now the SA government is not releasing any information on Mandela's personal fortune. We'll have to wait and see how much Nelson and Winnie stole.

This POS is viewed by lofo liberals as Jesus, MLK, Che and Stalin all rolled into one. Watch for it; the stinking, pandering politicians here in America will move to make his birthday a national holiday. Somewhere a bridge will be named after him. I hope it leads to a festering shithole.

Last night my new knee was giving me a lot of problems and I didn't sleep much, I finally got up in a really terrible mood, This video really helped me this morning.

It was a sad day, the day this country honored the death of a murderous communist by lowering it's flags.

Nelson Mandela and his wife, Winnie, should also be remembered for necklacing - the practice of murdering political opponents by putting a used tire around their necks, filling it with gasoline and setting the hapless opponent on fire. Mandela was no George Washington.

This is the work of Obama's hero, the left's object of adoration. 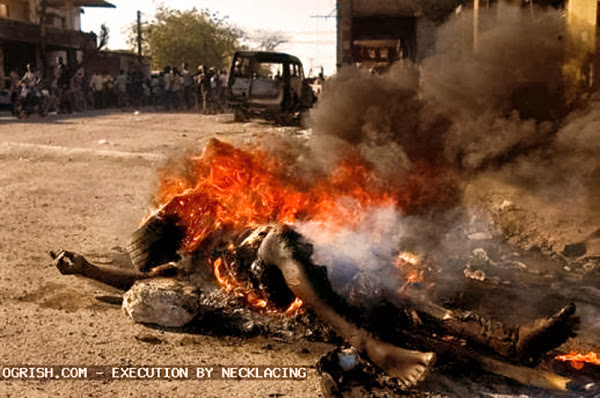 The above photo shows the remains of a South African woman whose only sin was sleeping with a white policeman.
Posted by sig94 at 11:33 AM 7 comments: