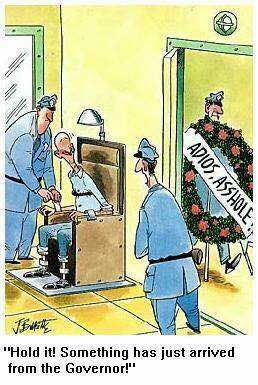 Email ThisBlogThis!Share to TwitterShare to FacebookShare to Pinterest
Labels: Crime and Punishment I hardly ever watch Fox News, haven't for about three or four years.
Why? I got tired of idiots like Juan Williams blathering his liberal, mindless crap and the "fair and balanced" yelling back and forth with the likes of coke head Beckel and other fools.

Now that Fox has completely grabbed its ankles, it's time for another network.


On the heels of major shakeups at the Fox News Network, an alternative conservative network is being actively discussed amongst conservative fat cats.

A well-placed source close to the proposal tells Mediaite that serious discussions are underway to create an alternative conservative cable network on the belief that the Fox News Network is moving too far to the left. The source, who is engaged in the talks, says a meeting is planned for today with two prominent high-powered television executives, some underperforming conservative networks and people who have an interest and the ability to fund a new network.

Fat, Homicidal And A Bad Haircut Is No Way To Go Through Life, Son
But at least he's not crazy.


Secretary of State Rex Tillerson said Thursday that while North Korean leader Kim Jong Un may be a ruthless, murderous dictator, he is not mentally insane.

"All indications are that he is not crazy," Tillerson told Fox News. "He may be ruthless. He may be a murderer. He may be someone who in many respects we would say by our standards is irrational. But he is not insane."

From T-Rex' lips to God's ear.


"She Had An Itsy-Bitsy, Teeny-Weeny Home Grown Brain Like A Zucchini"
The Scarecrow from the Wizard of Oz provided the funding for this research.


Tiny human brains have been grown in a dish, an accomplishment which could lead to breakthrough treatments for conditions like Alzheimer’s and schizophrenia.

The brain cells have formed similar circuits to those of a 2-month-old fetus and give scientists an opportunity to examine how the brain and any diseases develop.

Researchers at Stanford University first grew two forebrain circuits, before going on to the next step of growing a mini-organ over nine months.


Fog, Low Visibility And Vodka
There, fixed it for ya.


A Russian warship has sunk after colliding with a freighter in the Black Sea off the Turkish coast.

The 78 crew members on board the Russian navy's intelligence vessel - Liman - were evacuated.

Turkish officials said 15 Russian sailors were rescued after boats and helicopters were dispatched to the area, near the Istanbul coastline.

The crew on the freighter, which was carrying livestock, were also all accounted for and safe.

It's good to be home, We were gone almost three weeks,

The weather in Fayetteville was gorgeous, highs in the eighties and clear skies almost all the time. In addition to working on Danielle's house, I also took a two mile walk almost everyday. Lost a few pounds and got some sun.

We also looked at some houses in that zip code and in a neighboring county. There are some incredibly beautiful homes in Spring Lake, the town where Danielle lives; way out of our price range of course but very nice. Her neighborhood is extremely well kept, the lots are large (she bought a ranch on a 3/4 acre plot), there are no cookie-cutter homes and the people are very friendly. I met a few of them on my walks; friendly Southern folk.

Last week we had the neighbors from across the street over for dinner; he's retired Army and works for the same Special Forces contractor as Danielle. Very nice couple with two children.

Danielle will be going to Ft. Bennington for jump school so she might miss her cousin's wedding in June. She doesn't know the exact date yet so we'll have to wait a bit.

We drove back to Maryland last Saturday and got most of Mom's financial affairs settled. She had several accounts squirreled away over the years and some of the institutions would not give up any information until we had filed our power of attorney forms with them. My sister and her husband have done an incredible amount of work maintaining her finances and assisting with her care. At least we know that there are sufficient funds to maintain her in the assisted living center, even at a higher cost due to the level of care she is now receiving.

This is what Dad would have wanted. Mom is failing rather quickly but is still feisty. She has very low heart function left and congestive heart failure will do her in, maybe in a few months, or a few weeks, it's hard to say. But knowing Mom, she could go to the end of the year perhaps just because she's ornery. Either way, it's in God's hands.

When we moved Mom out of her condo in Hauppauge, Long Island in 2015, we packed up a ton of her stuff and moved it into my sister's garage. Caren said Mom had boxes of photos that we should go through. We finally sat down and did so on Friday. I couldn't believe some of the old photos. A few were almost  100 years old. I saw some pictures of Mom when she was all dolled up in her late teens. She was stunning. By time she was twenty she already had my sister (1948), I followed a eight days less than a year later.

An estimated 346 employees in the Department of Veterans Affairs do no actual work for taxpayers. Instead, they spend all of their time doing work on behalf of their union while drawing a federal salary, a practice known as "official time."

That's according to a report by the nonpartisan Government Accountability Office. But exactly what those VA workers are doing and why so many are doing it is not clear. The VA doesn't track that, and the GAO report offers no clue.

And the number may actually be much higher. I'd love to see how much community organizing these slobs do.

Many federal agencies have workers who do nothing but take care of union affairs but the VA employs almost half of them. And typically, no one knows what they are doing.


At least 700 federal workers do nothing but work on official time, according to the GAO and data obtained from various Freedom of Information Act requests. The VA uses official time far more than any other agency.

It is possible that even those figures are conservative. The GAO said the said the VA's poor monitoring meant the data was "inconsistent and not reliable."

Email ThisBlogThis!Share to TwitterShare to FacebookShare to Pinterest
Labels: Stuff

We had a great time in NC and did some work on her house, fixing the walls in her dining room and my SIL and I installing a new storm door on the front of her house. Our daughter Jess and her family left on Easter Sunday and my oldest daughter and her family left on Thursday. From a house full of 12 people it was just the three of us for the end of last week. And of course the two dogs.

We left Danielle's house on Saturday and we are back a my sister's in Maryland. We had a nice Sunday dinner with my Mom at the senior facility and she was was pretty much all there, a real blessing indeed. We have some work to do over the next few days getting the rest of Mom's finances in order, back to Syracuse on Wednesday.