Guess Who Gets Her Ass Handed To Her ... Twice

Little Obama
Wasn’t loved by his momma.
So she dumped him with Grandma instead,
When he was elected
No one ever suspected
How much this messed up his head.

He’s a fiscal disaster
An incompetent master
Everything he touches turns to shit.
All we get is fertilizer
From a community organizer
We’d been better off electing a tick.

Our President’s a rookie
The First Lady’s a Wookie
2008 must have been some kind of glitch.
But don’t you all fret now
In November you’ll know how
We got rid of that sonofabitch.

But We Know Where The Absentee Ballots Aren't Going

A plane crash has possibly destroyed thousands of absentee ballots headed to our troops overseas.


Federal officials say that absentee ballots being sent to U.S. military serving in Afghanistan may have been burned in a plane crash.

A top official in the Federal Voting Assistance Program this week notified election officials across the nation that a transport plane crashed at Shindad Air Base on Oct. 19.

The crash resulted in the destruction of 4,700 pounds of mail inbound to troops serving in the area.

Federal officials in their email to state election offices said they did not know if any ballots were destroyed. They also said the lost mail was limited to one zip code.

Of course the very next question is, "Which zip code?" Bet it's one from a hotly contested swing state.

Northern Virginia anyone? Michigan? Colorado?
Posted by sig94 at 7:54 AM 7 comments:

Wonder Where It's All Going Just Before Election Day 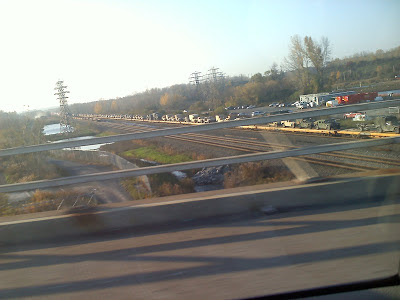 Driving home from picking up my new kitchen floor tile I took this picture of a train with about a half mile of military equipment attached to it. I drove by it twice and could not see the end of it from the overpass.

It was parked for at least 40 minutes on a rail right next to the NYS Fair Grounds. It was headed east. I have lived here for over thirty years and have never seen anything like it.

Call It What It Is - Rape

There is so much that is sad and wrong with this story.

The tormented Staten Island teenager who killed herself by jumping in the path of a train was bullied to death by classmates after she had sex with four football players, police sources said Thursday.

Felicia Garcia, a 15-year-old freshman at Tottenville High School, was driven to her death after two 17-year-old classmates blabbed about the encounters.

“Kids are saying she had sex with some guys from the football team at a party after the game,” said a friend of the doomed girl who asked not to be identified. “Later on they wouldn't leave her alone about it. They just kept bullying her and bullying her.”

After the weekend, the bullying sent Felicia into the final tailspin in a long-troubled life.

First off, there is the popular misconception that there is no downside to unbridled, "free range" consensual sex. That is the lie foisted upon our culture by liberals and their sexual revolution. Sex is not love and love is not sex.

So many of my generation had to learn this. Poor Felicia, already burdened by a dysfunctional family, learned this the hard way and it broke her.

School officials heard of the bullying and set up a mediation session Wednesday with a counselor and one of the 17-year-old boys. The teenager denied harassing the girl, the sources said.

Leaving the office, Felicia later ran into the other 17-year-old who had been making her life miserable — and they exchanged words, the sources said.

Police did not say what was said. But it was enough to send Felicia marching off to the Huguenot station of the Staten Island Railroad, where she killed herself in front of horrified classmates.

Senior Alissa Compitello said she saw Felicia on the way to the train station and the girl told her that she had the mediation because of the bullying.

“She was smiling though, like everything was going to be okay,” said Compitello, 17.

But a quick look at Felicia’s Instagram account would have revealed the depths of her despair. On it, she placed a picture of herself with the word “Depressed” covering her eyes.

“Just because someone is smiling doesn’t make them happy,” read her caption.

These young men (I don't like to call them men, they are mean spirited child rapists) and need to be arrested and charged under Section 135.25 of the NYS Penal Law, Rape 3rd. By law, a 15 year old child is not capable of granting consent to sexual intercourse. This is why we have laws protecting children.

Felicia was preyed upon by these rapists and they must pay the price.

But of course the idiots in the school system go off on an anti-bullying frenzy. This is an instance of rape, endangering the welfare of a child and harassment. There are existing laws passed by the NYS Legislature structured to deal with this. What is needed are school administrators who will deal realistically with problems, not engage in a knee jerk reaction offering agenda-driven liberal pablum.

Of Lying Lips And DingDongs 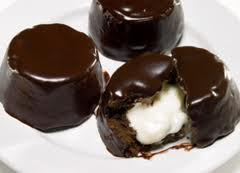 We can't take anymore lies, so sew his lips shut. And while we got the needle and thread out, sew Hillary's and Jay Carney's lying tongues together.

We're long past impeachment. Arrest all these lying sonsofbitches.

Perp walk Obama's skinny ass right down to Congress. Jack those cuffs up behind his back and teach him how to do the chicken all the way down the Mall.

He's got more than enough spare change to afford his own attorney and to keep Mooshell in her $35 million Kailua, Hawaii, mansion stocked with Dingdongs - no assigned counsel for you bucko.

Officials at the White House and State Department were advised two hours after attackers assaulted the U.S. diplomatic mission in Benghazi, Libya, on September 11 that an Islamic militant group had claimed credit for the attack, official emails show.

The emails, obtained by Reuters from government sources not connected with U.S. spy agencies or the State Department and who requested anonymity, specifically mention that the Libyan group called Ansar al-Sharia had asserted responsibility for the attacks.

The brief emails also show how U.S. diplomats described the attack, even as it was still under way, to Washington.

They knew. All of them. All the time.

They knew from the get go.

But we knew that.

The records obtained by Reuters consist of three emails dispatched by the State Department's Operations Center to multiple government offices, including addresses at the White House, Pentagon, intelligence community and FBI, on the afternoon of September 11.

The first email, timed at 4:05 p.m. Washington time - or 10:05 p.m. Benghazi time, 20-30 minutes after the attack on the U.S. diplomatic mission allegedly began - carried the subject line "U.S. Diplomatic Mission in Benghazi Under Attack" and the notation "SBU", meaning "Sensitive But Unclassified."

The text said the State Department's regional security office had reported that the diplomatic mission in Benghazi was "under attack. Embassy in Tripoli reports approximately 20 armed people fired shots; explosions have been heard as well."

The message continued: "Ambassador Stevens, who is currently in Benghazi, and four ... personnel are in the compound safe haven. The 17th of February militia is providing security support."

As far as Reuters playing the role of the good citizen journalist by releasing this story - how long before the last debate did they know this?

Irony - It's What's For Dinner

A lesson in irony

The Food Stamp Program, administered by the U.S. Department of Agriculture, is proud to be distributing the greatest amount of free meals and food stamps ever.

Meanwhile, the National Park Service, administered by the U.S. Department of the Interior, asks us to "Please Do Not Feed the Animals."

Their stated reason for the policy is because the animals will grow dependent on handouts and will not learn to take care of themselves.