There is no doubt about this one; it is a UN political move solely calculated on how much they can steal or extort from Western nations.

With well-armed troops on the ground the UN couldn't do a thing to protect more than 500,000 Tutsi's from being slaughtered in 1994, but they'll go to the mat for a sardine.


The United Nations has launched a far-reaching initiative that could give U.N.-sponsored authorities sway over the biological resources of the high seas—all the waters that lie outside national territories and economic zones.

Here's the kicker. There's more money at stake here than you can shake a Tutsi at, if you can find one.

This comes on the heels of 11 million documents that were leaked from a Panama law office showing how the world's leaders hide their fortunes that they stole from their constituents. When it comes to murder and larceny, there are no bigger criminals than those who control their governments.


The potential shift in power involves multi-trillion-dollar issues, such as whether large areas—conceivably, as much as 30 percent-- of the world’s international waters should be designated as no-go areas to protect biological diversity; whether and how to require elaborate “environmental impact assessments” for future ocean development projects; and how to divide up the economic benefits from the future development of “marine genetic resources.”

Eden Charles, a diplomat from Trinidad and Tobago who is serving as the chairman for a U.N. preparatory committee that began the discussions this week underlined to Fox News that the talks are at a “very, very preliminary stage.”

Yeah, I'm gonna let some asshole from Tobago determine how much I pay for a can of tuna.

This is all environmental/social justice bullshit. You can read more here from a speech he delivered to the UN in 2014. It's not only about sustainable development, it's also about delivering technology and industrial capacity to under developed nations; you know, those countries where if their leaders don't sell a competing tribe into slavery, they eat them.


Overall, the hoped-for treaty will cover “two-thirds of the oceans, almost half the planet,” says Lisa Speer, a senior official of the National Resources Defense Council (NRDC), which is in turn a lead member of a squadron of 33 environmentalist groups banded together as the High Seas Alliance to lobby for protectionist measures during the talks.

And there you go. Thirty-three groups of self-styled saviors who don't bathe in order to save the planet will dictate policy governing much of the planet's surface.
Posted by sig94 at 9:20 AM 5 comments:

I don't care if it's nails in her coffin or nails in the cross as long as they're nails that finish her.

The extradition of Romanian hacker “Guccifer” to the U.S. at a critical point in the FBI’s criminal investigation of Hillary Clinton’s email use is “not a coincidence,” according to an intelligence source close to the case.

One of the notches on Guccifer’s cyber-crime belt was allegedly accessing the email account of Clinton confidant Sidney Blumenthal, one of Clinton’s most prolific advice-givers when she was secretary of state. It was through that hack that Clinton's use of a personal account -- clintonemail.com -- first came to light.

Former law enforcement and cyber security experts said the hacker, whose real name is Marcel Lehel Lazar, could – now that he’s in the U.S. – help the FBI make the case that Clinton’s email server was compromised by a third party, one that did not have the formal backing and resources of a foreign intelligence service such as that of Russia, China or Iran.

“Because of the proximity to Sidney Blumenthal and the activity involving Hillary’s emails, [the timing] seems to be something beyond curious,” said Ron Hosko, former assistant director of the FBI’s Criminal Investigative Division from 2012-2014

[...]The Romanian government told Fox News that the request to extradite Lazar came from the FBI, but when Fox News asked when the process began, a government spokesperson said they were not authorized to comment further.

Romanian media have reported the request came on or about Dec. 29, 2015. That would have been shortly after the intelligence community’s identification of emails beyond “top secret” on Clinton’s personal server, which became public in mid-January.

Clinton’s deliberate choice to use a private, unsecure server based in her home and a private email address for her government business as secretary of state remains under federal investigation by the FBI while she campaigns for president. It has been widely reported in the last month that the FBI is setting up interviews with Clinton and her associates, what is believed to be a final phase in the process.

It Rots From The Head

New York City Mayor William de Blasio has succeeded; he has reached the pinnacle of Democratic political success by attracting a major federal corruption investigation. He can now say he is as important as Hillary Clinton.

With subpoenas issued, investigations spreading and at least one federal grand jury at work, the question isn’t whether Bill de Blasio’s administration has a corruption problem. The questions are how big is the problem, how many agencies are tainted and how high up the pecking order does it go?

The preliminary answers are worrisome. A small army of investigators, including the FBI, is on the hunt, and all roads appear to lead straight to Mayor Putz.

The two biggest and most recent scandals involve lucrative gifts and cash given to current and former top officers in the NYPD, and the removal of a deed restriction and sale of a city-owned Manhattan building that netted private investors a cool $72 million profit.

[...] As the incidents multiply, with the mayor’s city and state Democratic allies joining the probes, we are long past the suggestion threshold. A little more than two years into de Blasio’s term, an integrity reckoning is overdue.

Wow, only two years as Mayor and already he stinks like a dead fish.

Even a busted clock is correct twice a day, or he may only be telling the truth because he thinks he's lying. Dementia can do that to you.

Understatement Of The Year: NYPD Corruption

“This is not a particularly good day for the department,” Bratton said at a press conference.

On the first day of our police academy (October 1974), the Chief of Police showed up to give his rookie speech. There were about thirty of us in the room when he delivered his "Booze, Broads and Bribes" message. I still remember it today. Obviously this universal warning which has been delivered to just about every cop in the country over the years did not resonate with everyone.


Two high-ranking NYPD officials have been stripped of their guns and badges Thursday morning amid an FBI probe of suspected corruption in the department first reported by The Post.

Bribes are the bane of police. You don't sell your badge.

Perhaps if they had studied Luke 3:14 and what John the Baptist had to say:
"And soldiers also asked him, saying, And we, what must we do? And he said unto them, Extort from no man by violence, neither accuse any one wrongfully; and be content with your wages."

For all your fine jewelry needs: There is only Zuul.

Honestly, I don't know enough about demonology to guess whether this is a realistic concern or just another piece of sensationalistic verbiage. From Christianity Today. 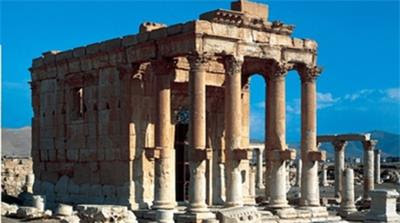 The ruins at the Temple of Baal in Palmyra, Syria .

Christians should watch out for two events that would take place simultaneously on April 19 in New York City and London, Christian author Michael Synder says.

On that day, reproductions of the arch that stood in front of the Temple of Baal in Palmyra, Syria are going to be erected in Times Square and in Trafalgar Square. That would coincide with an occult festival related to the worship of a demon named Baal.

Writing for Charisma News, Synder wonders whether the arches to be installed would be the giant "welcome signs" for the Antichrist.

The author says his fears are based on these facts:

"April 19 is the first day of a 13-day period of time known as 'the Blood Sacrifice to the Beast' that culminates on the high occult holy day of Beltane on May 1," he says.

April 19 is also the date of the Feast of Moloch, an ancient Canaanite god that is repeatedly vilified in the Old Testament.


I am curious why the nutcase Muslims in the ISIL didn't blow the Temple of Baal to bits. They took out churches and Lord knows what else but left this steaming pile of human sacrifice alone. I think it's because Baal and Allah are BFF's. Ancient pagans sacrificed their children to Baal by throwing them  into furnaces ... alive. I see that's making a comeback in the Muslim world. ISIS just torched about a dozen people trying to escape from Fallujah.

Another aspect of pagan worship was gross sensuality and religious prostitution (Temple whores) as  well as human sacrifice.

I'd say we're getting ready for Satan's coming out party.

Here is an interactive map of the people involved in the scams, paybacks, bribes and thievery detailed in the Panama Papers. The scope and scale of this is breathtaking.

I Want To Science You

Each of the single-molecule, 244-atom submersibles built in the Rice lab of chemist James Tour has a motor powered by ultraviolet light. With each full revolution, the motor's tail-like propeller moves the sub forward 18 nanometers.

And with the motors running at more than a million RPM, that translates into speed. Though the sub's top speed amounts to less than 1 inch per second, Tour said that's a breakneck pace on the molecular scale.

"These are the fastest-moving molecules ever seen in solution," he said.

[...]Tour's group has extensive experience with molecular machines. A decade ago, his lab introduced the world to nanocars, single-molecule cars with four wheels, axles and independent suspensions that could be "driven" across a surface.

Next: nanoscale ballistic missiles
Posted by sig94 at 4:00 PM 2 comments:

Email ThisBlogThis!Share to TwitterShare to FacebookShare to Pinterest
Labels: I Want To Science You

T’was after the Final Four and all through our place
We were feeling real down, we had a long face
The Tar Heels had won there wasn’t a doubt
They played a good game and now Syracuse was out.
So then off to bed, disappointed and tired
Sleep was what’s needed, rest was required.
When all of a sudden at 7 am I arose
I looked out the window and I shouted “Oh noes!”
All was covered in snow as far as I could see!
An inch or two had fallen, perhaps maybe three!
The wind was a’blowing! The snow it was drifting!
And I shuddered at the thought of the snow I’d be lifting.
“I’ve had enough! I bid you good day!”
“I’m going back to bed. I’ll see you in May!”


There's now about six inches of snow in front of my house.