25 Years Ago - Trump On Oprah Winfrey

Time goes by so fast. For almost sixteen years now I have been working for our local county prosecutor and one of the cases that still pisses me off is one that occurred in a county 600 miles away.

In March of 2006 three young men were railroaded by a coke whore, a corrupt prosecutor and an entire university faculty. Even though justice was finally served and they were cleared of all charges, the entire incident and it's aftermath still stinks.


The story scratched every social-justice itch, and everyone seemed more than happy to scratch away, despite a lack of evidence. A little more than a year after the alleged assault, North Carolina Attorney General Roy Cooper took the unusual step of declaring the three accused men “innocent,” after a “tragic rush to accuse and a failure to verify serious allegations,” and prosecuting Durham District Attorney Mike Nifong was disbarred and convicted of contempt.

How badly did this case go?
Read Fantastic Lies: 10 Appalling Moments From The Duke Lacrosse Case
The legal settlements reached by Duke University, Durham County and the City of Durham are confidential, it cost all involved plenty:


Roy A. Cooper, North Carolina's attorney general, took over the case after Nifong was removed, and after reviewing sealed court files, including records of Magnum's mental health, dismissed charges of rape, kidnapping, and sexual offense. The three men have since settled with Duke for what is rumored to be $20 million each, and Vanity Fair estimates that the entire case, including the legal fees, settlements for the falsely accused players, and other public-relations related issues, cost the university $100 million.

I hope their alumni donations bottomed out.

Three years after the case was thrown out of court, the lying coke whore, Crystal Magnum, was arrested on charges of attempted murder, first-degree arson, assault and battery against her boyfriend, Reginald Daye. A year later she stabbed him to death him and is now serving out her 18 year sentence in the North Carolina Correctional Institution for Women in Raleigh.
H/T Lucianne.

At Least We Know Who Trump Is

We pay more attention to ascertaining the true identity of someone being arrested for possessing a single marijuana cigarette than we do for the highest elected official in the land. Get arrested and your prints are researched and all alias information and prior arrests are listed. All your sins are uncovered through official channels.

Get caught with a joint and the government puts you under a microscope. Why doesn't that happen with politicians where they can really do some damage?


The fact that Anonymous has made no effort to find if any of Obama's SSN's are valid shows that they're just liberal trash after all. That's not exactly being against corruption on all sides. Disappointing.

However, Anonymous is going after Trump.

Other investigators have kicked up some interesting data regarding Obama's identity:


In Obama’s home state, Illinois, Sankey tracked down 16 different addresses for a Barack Obama or a Barack H. Obama, of which all are addresses he was known to have lived at. Two Social Security numbers appear for these addresses, one beginning with 042 and one starting 364.

In California, where Obama attended Occidental College, there are six addresses listed for him, all within easy driving distance of the college. However, there are three Social Security numbers connected to these addresses, 537 and two others, each beginning with 999.

There are no addresses listed in New York where he attended Columbia University, but there is one listed for him in nearby Jackson, NJ, with a Social Security number beginning with 485.

Not surprising that we'll only hear dirt about the Republican ticket. Every liberal democrat gets a pass from the MSM.

I wonder how much "support" the major pharmaceutical companies gave to the Joint Commission on Accreditation of Healthcare Organizations when they recommended that doctors should initiate discussions about pain management with all their patients. From the UK Daily Mail:


Fifteen years ago, a report by the Joint Commission on Accreditation of Healthcare Organizations, a nationally recognized medical society which accredits hospitals, stressed that pain was vastly undertreated in the United States.

The report recommended that physicians routinely assess pain at every patient visit.

It also suggested that opioids could be effectively and more broadly used without fear of addiction.

Of course there were pain medications available for this. Lots and lots of medications.


The report was heavily publicized, and today it is widely acknowledged that it led to massive – and sometimes inappropriate – increases in the use of prescription opioid drugs to treat pain.

With more opioids being prescribed by well-meaning doctors, some were diverted from the legal supply chain – through theft from medicine cabinets or trade on the black market – to the street for illicit use.

As more opioids leaked out, more people started to experiment with them for recreational purposes.

This increase in supply certainly explains a large part of the current opioid abuse epidemic, but it doesn't explain all of it.


Oxycontin is one of those medications and Perdue Pharma has made billions from it.


According to the American Society of Interventional Pain Physicians, Americans consume 80 percent of the world’s pain pills.1 Misleading pain statistics are used to push increasingly stronger narcotics into the marketplace.

Since OxyContin was introduced in 1996, Canada has recorded the second-highest number of prescription opioid painkiller addictions and the world's second-highest death rate from overdoses. In the US, narcotic overdose deaths now surpass deaths from murders and fatal car accidents.

[...] Because of its insatiable demand, some patients with legal prescriptions begin selling OxyContin tablets to drug dealers for a profit. The pharmaceutical company earned billions while watching their “miracle drug” turn ordinary citizens into hardened addicts and criminals.

How many people have died as a result of OxyContin? A firm number is difficult to ascertain. A variety of numbers have appeared in media reports, usually lacking citations or references, and many deaths involve a combination of drugs and alcohol.3

In 2009, 1.2 million emergency department visits involved the “nonmedical use of pharmaceuticals or dietary stimulants” (which includes abuse). Oxycodone alone or in combination with other drugs accounted for 175,949 of those visits.

When crack cocaine hit American cities in the mid 1980's it quickly became the drug of choice. Now heroin has come roaring back in a big way. This taste for opioids was no doubt fueled by prescription drugs such as Oxycontin. Our county is the poster child for fatal drug overdoses.
Posted by sig94 at 8:01 PM 2 comments:

A Policeman's Lot Is Not A Happy One 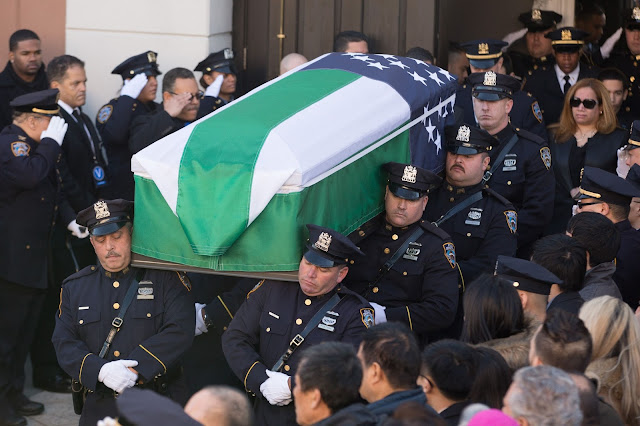 Police work can be incredibly stressful. Working the streets in a high crime area dealing with call after call, violent criminals,  hostile complainants, a hostile city administration and liberal courts breathing down your neck makes it worse. I wonder why I put up with it so long...

Four NYPD officers were murdered last year. So far in 2016, thirteen officers across the US have been shot to death and one killed via vehicular assault.

Therefore the results of a NYPD police union poll are not surprising:


The vast majority of NYPD officers who answered a new survey hate their jobs and believe they were a lot safer before Mayor de Blasio and Police Commissioner Bill Bratton took office, according to a new survey by the city’s police union.

“The results of this survey prove what we’ve been hearing time and time again from members over the past two years — the job is more difficult than ever, the dangers are greater, and morale is extremely low,” said Patrick Lynch, president of the Patrolmen’s Benevolent Association.

Our Struggle, Our True Opponent

The news that the US DoJ was  considering prosecuting critics of global warming should have raised the  hackles of every freedom-loving, God-honoring person in America.


That’s why the news that Attorney General Loretta Lynch reviewed the possibility of pursuing civil action against climate change skeptics (“deniers”) was as disturbing as the report that Iran recently tested two ballistic missiles.

The Antichrist is coming; scripture in both the Old and New Testament has warned us, over and over the apostles warned us and it will surely come... and he will establish a world government. The movement towards this consolidation has been well underway, especially since the end of World War II.

There are several vehicles or strategies being used to accomplish this end; the most prominent ones right now are the United Nations and the global warming hoax.  Naturally Obama is upset that his climate control machinations as well as his legacy is unraveling. Either by force or by threat of law Obama will try to accomplish his dark ends. Ergo the DoJ was consulted in consideration of intimidating those who would resist this lie.

Climate change alarmists have already made significant inroads against our liberties. In the 114th Congress alone, almost 100 bills were proposed that reflected climate change environmental concerns.

Climate change is now considered a source of terrorism by leftist puppets.

Mother Gaea must be honored...

Hand in glove with worship of naturalism is the rise of Satanism throughout the world. In Europe and the US there is evidence to show an increase in Satan worship and animal/human sacrifice.

In 2010 seven Russian teenagers involved in Satan worship were prosecuted for sacrificing humans and eating parts of them.

In Mexico Satanic animal sacrifice is becoming common and human sacrifice is used by the drug cartels to seek supernatural protection for their drug trafficking. Our porous border security ensures that these twisted individuals can cross into America with ease.

Our struggle, however, is not against other people or human government:

Ephesians 6:12
For we do not wrestle against flesh and blood, but against principalities, against powers, against the rulers of the darkness of this age, against spiritual hosts of wickedness in the heavenly places.
Posted by sig94 at 1:04 PM 3 comments: