I grew up watching "Victory At Sea" serials.

My dad joined that Navy in 1943 at the age of 17. He became a hard hat diver and served in both the Pacific and Atlantic Oceans. I remember something he told me when I was about 12 years old;  he said, "Just before the torpedo hits, get up on your toes else the force of the explosion coming up from below the deck will break your ankles."

I think he had been drinking and remembered how it felt when his ship was sunk by a Japanese submarine.

Email ThisBlogThis!Share to TwitterShare to FacebookShare to Pinterest
Labels: Family, US Navy, WWII

Police Officers Killed In the Line Of Duty

I often go to this site, the Officer Down Memorial Page, and read about my fallen brothers. Last night was different, I downloaded ten years of Police Line Of Duty (LOD) deaths. I did this not from some macabre urge but from statistical curiosity - I have done law enforcement analysis for decades and wanted to see if this year's recent spike was part of a larger trend.

After compiling the LOD deaths for the period 2005 through 2014, I compared the total deaths per state with each state's estimated 2012 population and arrived at the following rankings of LOD deaths per 100,000 population for each state. Even though the number of deaths for these jurisdictions are listed, I did not include LOD figures for Guam, American Samoa, Puerto Rico, Railroad Police, Tribal Police, US Government or the Virgin Islands.

For the fifty states and the District of Columbia, there were 1,414 Police LOD deaths within a total population of 313,940,610 citizens, resulting in a national average of 0.45 Police LOD deaths per 100,000. These deaths of course are not all murders and not all LOD murders are committed with a firearm. LOD deaths include accidents, drownings, plane crashes, you name it.

The following states are the most deadly for police officers: 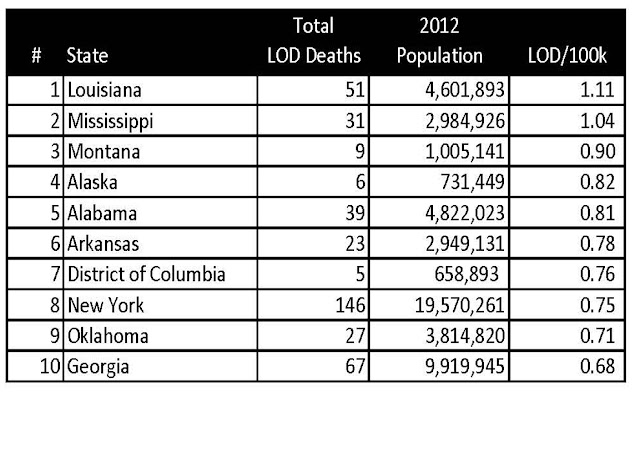 If Puerto Rico was a state it would rank as the third most dangerous with a LOD ratio of 0.91.

Funny thing - the state with the toughest gun control laws in the country had the most LOD deaths and is one of the 10 deadliest states for police officers. That's right New York, we're talking about you.

These states have the lowest LOD ratios: 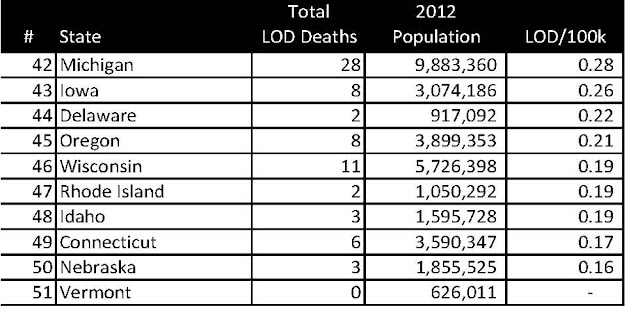 Another funny thing - the safest state for cops in the country, Vermont, is a shall issue state; no pistol license required. Vermont pistol laws:


Concealed Permit:
It is lawful to carry a firearm openly or concealed provided the firearm is not carried with the intent or avowed purpose of injuring a fellow
man. There is no permit required to carry concealed.

Requirements:
1. Be of age. In the state of Vermont, that age is 16 or older. You must be at least 16 years of age to legally purchase a gun and keep it loaded on your person in public.
2. Obtain permission from a parent or guardian to carry a gun if you’re under the age of 16. Failure to do so may result in being deemed a delinquent child by the state.
3. Have a clean record if purchasing a firearm. Things like felony convictions and dishonorable military discharge will show up during the federal instant check, and prohibit purchase.

For those interested, the following chart covers all states in alphabetical order with their ranking. The lowest numbers still indicate the highest level of Police LOD deaths.

So far this year, 83 officers have died LOD and 24 of them were by gunfire

The highest number of Police LOD deaths was in 1974; 280 officers were killed that year, half (140) were indeed killed by gunfire. . I joined my department that year. NYS did not start issuing body armor for cops until 1980. You best believe I bought my own Second Chance ballistic vest as soon as I got out of the academy.

Email ThisBlogThis!Share to TwitterShare to FacebookShare to Pinterest
Labels: music, The Strangeloves

You Wouldn't Think That #BlackLivesMatter


Looking at the 2013 murder victimization rates extrapolated from the FBI UCR Expanded Homicide Data Table 6:
As blacks comprise only 13% of the US population (roughly 41.2 million), these numbers are truly astounding. It gets worse as you drill down into the criminal activity of black youths.

Similar statistics were released by the Federal Bureau of Investigation (FBI) in the “Uniform Crime Reports.” They determined, “In the year 2008, black youths, who make up 16% of the youth population, accounted for 52% of juvenile violent crime arrests, including 58% for homicide and 67% for robbery.” By contrast, the only categories where white youths surpassed blacks were in liquor law violations and driving under the influence.

And The Beat Goes On

Baltimore - one of the bloodiest months ever: 45 murders in 31 days.

The deaths occurred across the city, overwhelmingly in historically impoverished neighborhoods. All but one of the victims were male, all but two of them black. Many had serious criminal records. The victims also included a 5-month-old boy and a 53-year-old grandmother, a teen stabbed to death in a dispute over a cell phone and a carryout deliveryman killed in a robbery.

And the attacks on police officers continues. Another officer was murdered, this time in Texas as he gassed up his patrol car. Some racist fiend came up behind Deputy Goforth and shot him 15 times in the head and back.


The alleged gunman who murdered a Texas deputy unleashed 15 shots at close range, emptying the entire magazine of his .40 caliber pistol and another bullet loaded in the chamber as he stood over the dead cop, according to Harris County District Attorney Devon Anderson.

Shannon J. Miles, 30, was arraigned for capital murder on Monday morning in the Friday shooting of Deputy Darren Goforth, 47.


And Obama and his race pimp cohorts started this ball rolling. In response, all he can do is rename a mountain.
Posted by sig94 at 9:02 PM No comments:

The Signs, They Are A'Changing 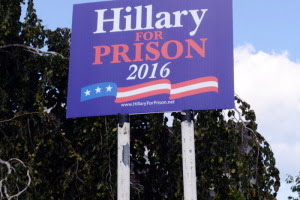 He could see clearly what others refused to see.
He had a message to tell and the roadside property to tell it.
One by one they stole his signs.
But they couldn't break his will.
They could not stop the message.
It became a ...
Billboard Armageddon.


This Hamptonite wants Hillary Rodham Clinton behind bars — and had to put his signs saying so behind an electric fence.

Andy Sabin’s first “Hillary for Prison 2016” signs lasted little more than a day before they were stolen from in front of his Amagansett home last week. So Sabin took steps to make sure the placards were secure.

The red, blue and white signs now sit atop a pair of 12-foot poles behind an electric fence with yellow warning signs. A surveillance camera keeps watch.

Signs he put up in 2008 supporting John McCain’s presidential bid were also taken, said Sabin, a Jeb Bush supporter who runs a precious-metals refining business.
“Living in a town with a lot of left-wing wackos, that’s what happens,” Sabin said.

"All speech is equal but some speech is more equal than others.
So what difference does it make?"
~ Hillary
Posted by sig94 at 9:18 AM 4 comments: