No Breakfast For You Private 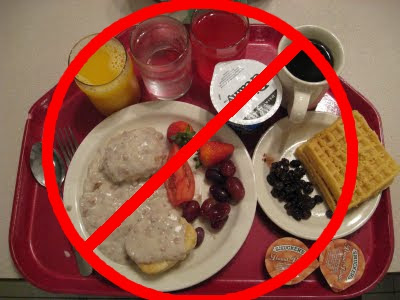 This is how the military treats our soldiers? WTH???

Braley has also been informed by the Army that this policy will be expanded to more locations in Afghanistan beginning on February 1st.

“I am troubled that the Army would deny any deployed troops three meals per day, regardless of force size,” Braley wrote. “These men and women put their lives on the line every day to protect the very freedoms we cherish. The exhaustive mental and physical labor that is required by soldiers to fight in harsh and unforgiving conditions is tremendous. We shouldn’t deny our troops something as fundamental as a proper meal.

“I am positive that with the logistical mastery the Army has exhibited in combat operations around the world, you can logistically administer the procedure of serving breakfast every day.”

The issue was brought to Braley’s attention by concerned family members of Iowa soldiers serving in Afghanistan.

But let's give the Muslim Brotherhood, unions, banks and welfare parasites all they want, eh Obama?

UPDATE
There is some word now that the DOD is doing this in preparation of troop reductions. They are "streamlining the logistics process" for these bases and troops will be served MRE's. I wonder if they'll streamline ammo too.
Posted by sig94 at 5:26 PM 10 comments:

If You Truly Love Something, Let it Go....

All in all, it's pretty much a preview of what will happen when the US pulls out of Afghanistan. 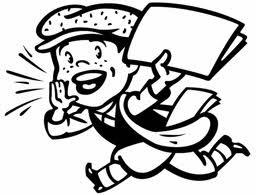 
Illicit affair: Minnesota attorney Thomas P. Lowe of Burnsville, 58, has been suspended from practicing law after he had a sexual relationship with a vulnerable client... and then billed her for the times they had sex.


Those airport scanners with their all-too revealing body images will soon be going away.

The Transportation Security Administration says the X-ray scanners will be gone by June because the company that makes them can't fix the privacy issues. The other airport body scanners, which produce a generic outline instead of a naked image, are staying.

And The Proud Turkey Baster is...


Mel Gibson is at the center of speculation that he could be the biological father of Jodie Foster's sons.

The rumours began when Jodie, who has never revealed her boys' paternity, thanked Gibson for his support during her emotional speech at the Golden Globe awards last weekend.

And now the reports have been fueled after the New York Post credited an 'amateur genealogist' for saying Charles, 14, and Kit, 12, bear more than a passing resemblance to the 57-year-old actor.

Not all NY politicians are knee jerk idiots. NY State Senator Kathy Marchione has a petition to repeal Cuomo's bid to become President by out Obama-ing Obama:

In a vote held in the state Legislature last night – Monday, January 14, 2013 – the Second Amendment Constitutional freedoms of New Yorkers were weakened with passage of restrictive new gun control. I strongly opposed this legislation that was rushed through both houses of our state Legislature without a single public hearing or the proper time to carefully review the bill.

Law-abiding citizens are NOT the issue! Millions of New Yorkers own firearms and do so safely, responsibly and legally. The real issue, the real threat, is dangerous criminals having guns and the seriously mentally ill obtaining access to guns.

Monday’s vote was only the beginning, not the end, of a critically important debate. I believe we must repeal and replace the restrictive parts of the enacted legislation. We should focus on increasing penalties for criminals who use firearms and addressing the issue of mental illness. However, I cannot do it alone: I need strong Second Amendment supporters like you to stand strong – and stand with me.

Please sign my Legislative Petition to build public support for repealing and replacing the restrictive gun control measures. If every New Yorker who supports the Second Amendment makes their voices heard we can forge a true public safety remedy that addresses real issues such as dangerous criminals and mental health without curtailing the Second Amendment.

This is no time to sit on the sidelines: every gun owner, hunter, sportsman and supporter of the Second Amendment must get involved. Now is the time to be heard! I will personally deliver these petitions to the Governor and Legislative Leaders. 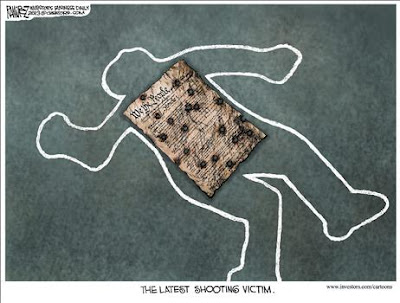 Bag it, tag it and notify the next of kin.

It Was Allah's Will

A brand spanking new Airbus 340-600, the largest passenger airplane ever built, sits just outside its hangar in Toulouse , France without a single hour of airtime.

Enter the Arab flight crew of Abu Dhabi Aircraft Technologies (ADAT) to conduct pre-delivery tests on the ground, such as engine run-ups, prior to delivery to Etihad Airways in Abu Dhabi .

Then they took all four engines to take-off power with a virtually empty aircraft. Not having read the run-up manuals, they had no clue just how light an empty A340-600 really is.

The take-off warning horn was blaring away in the cockpit because they had all 4 engines at full power. The aircraft computers thought they were trying to take off, but it had not been configured properly (flaps/slats, etc.)

Then one of the ADAT crew decided to pull the circuit breaker on the Ground Proximity Sensor to silence the alarm. This fools the aircraft into thinking it is in the air. The computers automatically released all the brakes and set the aircraft rocketing forward.

The ADAT crew had no idea that this is a safety feature so that pilots can't land with the brakes on.

Not one member of the seven-man Arab crew was smart enough to throttle back the engines from their max power setting, so the $200 million brand-new aircraft crashed into a blast barrier, totaling it.

The extent of injuries to the crew is unknown due to the news blackout in the major media in France and elsewhere because coverage of the story was deemed insulting to Muslim Arabs.

Finally, the photos are starting to leak out. 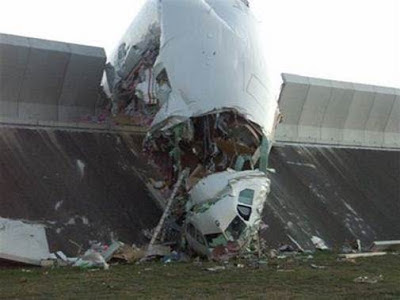 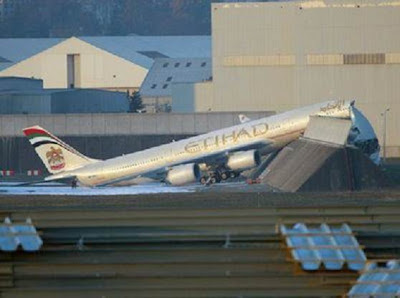 H/T to my brother who just got his pilots license at 62 yoa.