We're visiting my sister and her husband in Maryland on our way to North Carolna to stay with our daughter. Had a good trip from NY with just a few glitches and enjoyed a great dinner last night with them and my niece and nephews. Found out that my oldest grandnephew will be marching in Trump's inaugural parade next week. He is so excited. Everyone in his family (my sister and her husband of course) will be there as Trump walks from the Capitol to the White House.

He and his brother are such great kids. Their mom home schools them and they are quite the pair; these young men are very, very smart.

Obama's moving kind of slow these days. I can't see how this man plays basketball.


US Army moves 2,500 tanks, trucks and military vehicles into Europe in the biggest troop transfer since the Cold War 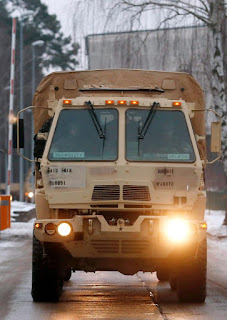 THOUSANDS of heavily armoured US military vehicles have arrived in Germany to respond to Russian aggression in Europe.

The military brigade of 3,500 troops is the largest to be deployed to the continent since the end of the Cold War.

Or maybe the UK Sun reporters need to take some vitamins or something.

Email ThisBlogThis!Share to TwitterShare to FacebookShare to Pinterest
Labels: Europe, Obama, US Military

So many fools, so little time.


Dozens of artists, entertainers, and activists including Rosie O’Donnell, Debra Messing, Ed Asner and Michael Shannon have attached their names to an effort calling for a month-long protest to stop President-elect Donald Trump. “No! In the Name of Humanity We Refuse to Accept a Fascist America!” reads a full-page ad placed in the New York Times last week by the group Refuse Racism. "Donald Trump, the President-elect, is assembling a regime of grave danger," the ad says.

"Millions of people in the US and around the world are filled with deep anxiety, fear and disgust. Our anguish is right and just. Our anger must now become massive resistance – before Donald Trump is inaugurated and has the full reins of power in his hands."

Other Hollywood celebrities who have also joined the campaign, however, are calling for an all-out strike that would span the entire movie industry in the hopes that such a move would urge the President-elect to resign from his position as the newly elected President of the United States.

Please do this. The Donald will be devastated by your actions.
Go on strike and deny us the benefits of your marvelous talent.
Teach us a lesson we'll never forget, like what a bunch of self-centered douches you are.
Please, just do it.

It's given that the class of people moving into a location can drastically affect property values. If so, the price of a furnished, two bedroom townhouse in Hell just got a lot cheaper. 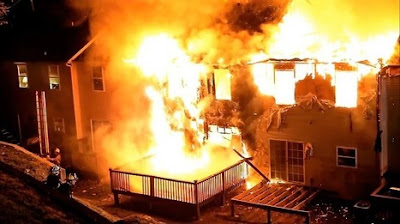 Charles Manson is closing in on death’s door, a source familiar with the matter told The Post on Monday.
“I don’t think he’ll be around too much longer, but he is able to talk in his current condition,” the California Corrections Department source said, referring to the infamous cult leader’s health crisis.

Last week, Manson, 82, was taken out of Corcoran State Prison in California’s Central Valley and rushed to a hospital in Bakersfield about 60 miles away for emergency surgery to stop his intestines from bleeding, sources told The Post.

But doctors decided not to perform the procedure because they believed that Manson was “too weak” and could potentially die while under the knife, TMZ reported.

Still, I'm always reminded that you may be surprised by who you don't see in Heaven rather than who you do see.

A United Airlines flight was delayed for hours because it had to be cleaned and repaired after the NY Giants trashed the business section. From the NY Post:


The Giants took out their frustrations at blowing their ​first ​shot at the Super Bowl​ in five years by trashing the jumbo jet that carried them home — leaving it reeking of booze and forcing a major clean-up at Newark Airport, passengers who boarded the plane afterward told The Post on Monday.

Mark Kropf said he was waiting to board United Airlines Flight 934 out of Newark when “the pilot came out and asked for everyone’s patience, and shared where the plane came from and that the plane needed extra help repairing and cleaning the interior.”

“Another 30 minutes passed and the gate agent told us it was the Giants that destroyed the biz class cabin, and we saw service personnel walking countless seat cushions off the plane,” Kropf​, a tech company employee from Brooklyn,​ wrote in a message via Twitter.

Witnesses state that the Packers trashed the Giants worse than the Giants trashed Flight 934.
Posted by sig94 at 5:26 PM 2 comments:

Ryan Reynolds Is A Funny Guy 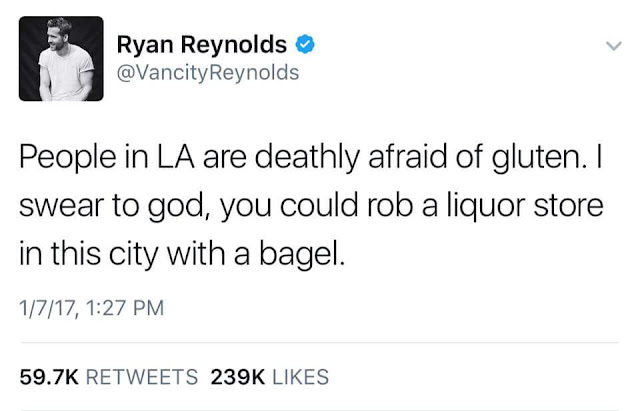