How About Sanctuary For African Whites? 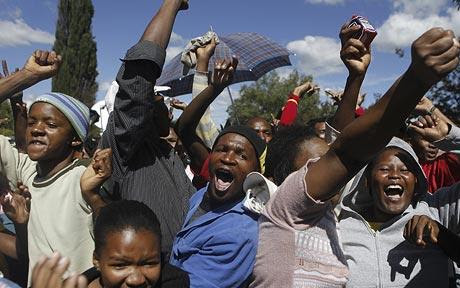 The terrorism accomplished through the slaughter of white people in South Africa is heating up. We have admitted thousands and thousands of Somalis and other so called minority races who are persecuted, so how about relaxing immigration restrictions for white South Africans who are being murdered by African natives? Huh, Obama? You and your wife are over there right now. How about dropping by SA and expressing your sympathy?

From the Daily Mail (not found in the NY Slimes of course):

Mandela's passing and the looming threat of a race war against South Africa's whites. As a widow mourns the latest murdered Afrikaner farmer, a chilling dispatch from a nation holding its breath

Roelof du Plessis, 46 shot on his farm outside Pretoria by gang of black intruders.

Fears rise that killings are part of a systematic bid to drive white people out of South Africa.

‘He was shot through the lungs and I was doing CPR,’ she told me, between huge sobs. ‘He said “please go and fetch the car and take me to hospital”. But he was too badly hurt and he died in my arms.’

In the morning, when white friends from neighbouring farms followed the trail of the raiders, they discovered the men had carefully cut through fences and skirted areas with security patrols — suggesting how closely they had planned their route of attack.

‘It is definitely coming down to a race thing,’ Laura du Plessis told me as she was comforted by her family. ‘They hate white people. We have never had a fight with any black people. I always stop and give others a lift. We employ black people.

‘My husband fought for me. I am grateful that he wasn’t tied up and forced to watch me being raped before he was
killed. He was an amazing man. He was my life.’

More racism in Africa here, here and here. Don't expect to read this in a liberal rag.
Posted by sig94 at 10:23 AM 7 comments:

There Are No Limits To American Absurdity 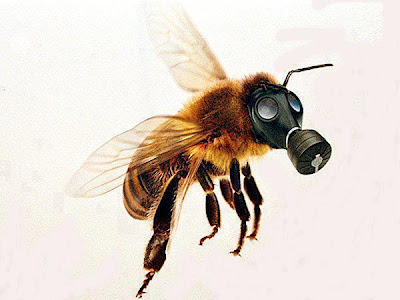 From some marijuana-riddled hippy heaven in Oregon:


Fifty thousand bumblebees will be honored in a memorial this weekend at the Wilsonville Target where a majority of the insects died. State officials directly linked the die-off to trees that had been sprayed with the insecticide Safari.

Rozzell Medina, of Portland, said on the Facebook page that the event will "memorialize these fallen lifeforms and talk about the plight of the bees and their importance to life on Earth."

Relatives from a neighboring hive will perform a fly by/sting by while the names of each victim are read off. Target's home headquarters has offered to demolish the store in order for a memorial park to be installed in its place.

Somewhere, somehow lawyers are buzzing over this. And yes, I get that bees are incredibly important to our fruits and vegetables, so let's ban the application of chemicals  that kill beneficial insect species (there's too much of this crap being being sprayed anyway) and stop worrying about where owls nest or if snail darters can fornicate. This whole environmental protection racket seems to be run by thugs and lunatics and people who would rather play golf and go on vacations than help run a country of 316 million people. Banging drums and giant puppet heads are not going to save a single bee, 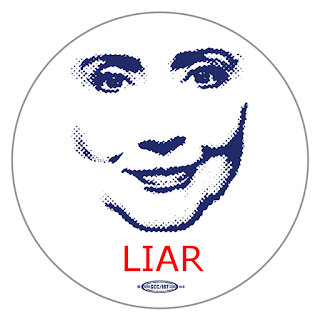 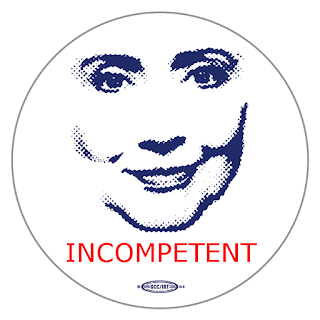 One Way To Save America

The CIA, NSA, Homeland Security and an alphabet soup of other hush-hush agencies are swarming around our emails, Facebook accounts, telephone communications and soup cans on a string like a cloud of horse flies over a steaming, fresh mound of crap.

Yet these agencies blow the Boston bombers investigation (the Russkies even threw these kids under the bus for us) and now are standing around with their thumbs up their butts during one of the most egregious thefts of souper-seekret national security information since Benedict Arnold - aka Edward Snowden.

Obviously these agencies do not consider these people a threat; no, no indeed. They weren't paying attention, didn't even raise an eyebrow. Nary a hiccup - just like the 9/11 terrorists practicing only take off procedures and the FBI turning down a request to examine Zacarias Moussaoui's laptop (the same idiot who deep-sixed the search warrant application got an award and a huge cash bonus for "outstanding work" a year later by the FBI - and try to find a link to it now).

Nary a soul got fired for the incompetence that led to the deaths of almost three thousand Americans in 2001 and these self same asshats are still running the show.

We are the threat. Loyal Americans who love this country and honor the greatest instrument of Liberty the world had known, the US Constitution. We are the threat that the government fears the most.

Oh, Beautiful for Drone-Filled Skies
For Endless Government.
For Socialistic Bureaucrats,
Why Wonder How Our Taxes Are Spent!

Amerika, Amerika!
Christ Turned His Back on Thee!
"Repent" is His Call
For One and All
He'll Heal Our Land You'll See!


2 Chronicles 7:14
If My people who are called by My name will humble themselves,
and pray and seek My face, and turn from their wicked ways,
then I will hear from heaven, and will forgive their sin and heal their land.
Posted by sig94 at 8:37 PM 9 comments: