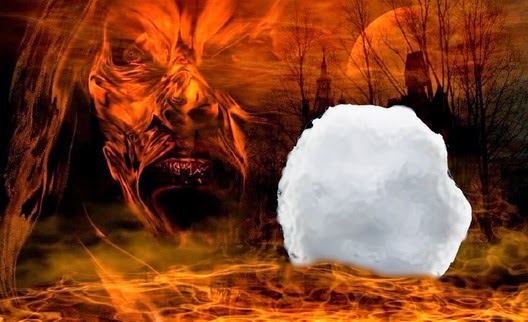 
The man who was the top Marine general from 2006 until his retirement in 2010 says President Barack Obama’s strategy to defeat the terrorist group the Islamic State in Iraq and Syria is doomed to fail.

“I don’t think the president’s plan has a snowball’s chance in hell of succeeding,” retired Marine General James Conway, who served as the 34th Commandant of the Marine Corps during the end of the Bush administration and the beginning of the Obama administration, said at the Maverick PAC Conference in Washington, D.C. Friday, according to a source in attendance.

[...]The source said Conway’s major concern was that the U.S. did not have a force on the ground in Syria it could rely on, like the Kurdish Peshmerga in Iraq. Though the Obama administration believes it can support what it says are moderate rebel forces in Syria to aid in the fight against ISIS, many critics warn that there may be no truly moderate force in the country of any significant strength.


This is Obama's wistful conception of "boots on the ground." 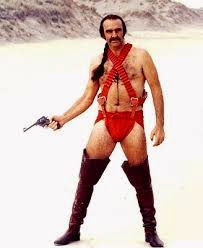 They're The Same Half A World Apart 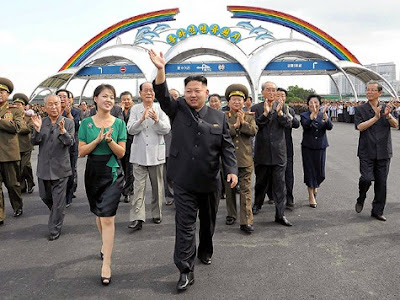 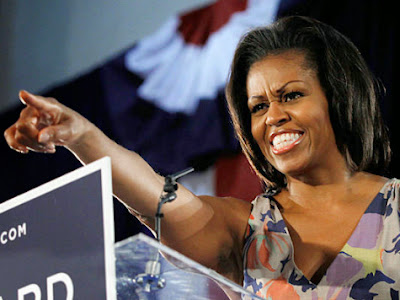 Americans 'Take for Granted' How Much Barack Has Improved U.S.
~ Breitbart

No matter where you go these delusional, self-serving a**holes are the same.
Posted by sig94 at 10:36 AM 3 comments:

Fifty-five percent of the voters were against independance. Yesterday the polls indicated that there were about 300,000 undecided voters. The initiative was defeated by almost 500,000 votes. Apparently the undecided came down firmly on the "no" side.

From all accounts a very heavy voter turnout.
Story here.

Last Of The Stuarts? 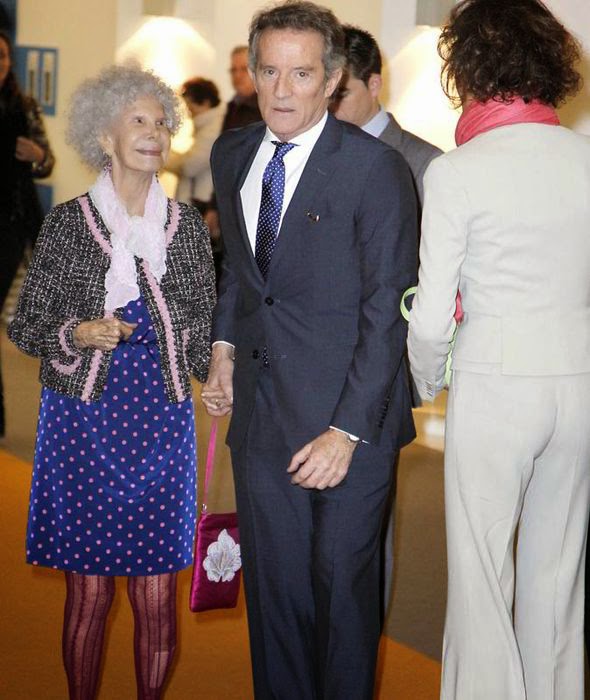 
From the UK Daily Express:


A YES vote in September’s referendum on independence for Scotland could reawaken centuries old claims to the Scottish crown from members of the House of Stuart.

And an 87-year-old billionaire from Spain might argue she has the strongest claim.

For the Duchess of Alba is said to be one of two main contenders from the Stuart dynasty, whose Scottish monarchs transformed the country during their time in power.

While First Minister Alex Salmond insists Queen Elizabeth II would remain as head of state after a Yes vote, others are not so sure.

Some Scots look back fondly in the history books to their Stuart kings, the first of whom was Robert II in 1371.

By the 17th century, they ruled all of England, Wales, Ireland and Scotland.

[..]The last Stuart monarch was Queen Anne, who died childless in 1714.

The Crown passed to the House of Hanover, but the Stuart line continued abroad.

And it apparently landed right in the lap of this dame ... or Franz, the Duck of Bavaria. 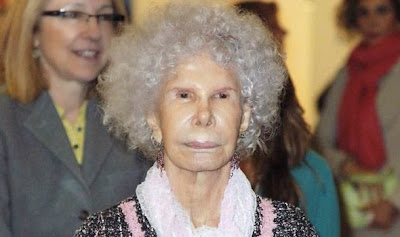 If the Duchess doesn't give you the great wobbly gobbles about a Yes vote, I don't know what will.

Now ... I don't have a dog in this fight. We kicked the Brits out 230 year ago and if the Scots want to do the same, more power to them.  The Scots certainly have a centuries long laundry list of injustice and harsh manipulation to grind. England knows this full well and has promised all sorts of kiss-and-make-up goodies in the days leading up to the vote.

But then again, it is the United Kingdom and we have fought more than a few wars right alongside them; Scots, Welsh and English. There is indeed (IMHO) a unique relationship between English speaking nations and I would hate to see that 300 year Union broken with all the concomitant mess and uncertainty that would accompany the divorce.

Plus, I really dislike the strong arm tactics of the Yes crowd. Acting like thugs does not lend validity to your cause.

So my thoughts on this are simple - God bless Scotland and England.

Whatever happens on Thursday I only wish the best for these peoples.

This article is a pretty decent summary of the move to make unskilled people unemployable. The "living wage" concept simply drives out businesses or raises prices to where businesses can not compete. These leftist idiots honor and worship Mother Gaia but ignore Father Free Markets.


[...]The economic pressures that led to robotics replacing manufacturers of physical goods are being applied to food preparation in the name of compassion. These “strikers” are painted as victims by the media and heroes for standing up for themselves.

In reality, they are people who've made bad choices in their lives and now, as adults, work dead-end jobs that were designed for children. The person most responsible for the misery in their lives is not sitting in a boardroom anywhere; it’s the upside-down image looking back at them from their spoons.

There’s no money and no power in conveying that truth, so it isn't told. But it’s a truth that bears repeating.

None of the “strikers” are saying they’re going to “earn” anything. They’re saying they “deserve” more. They don’t. If you can be replaced by a kiosk or the honor system, you are not in position to ask for a huge raise.

I disagree that all these minimum wage people have made bad choices; there are plenty of economically displaced workers who suffer from under employment because of piss poor government policies and out and out thievery.  That and college students need to graduate with a degree that has a chance of landing them a job; or don't bother going to college at all.  Hold off on that degree in gender misrepresentation among medieval lute players and instead apply for an electricians' apprenticeship.
Posted by sig94 at 9:30 PM 3 comments:

Another Gift From Dear Leader 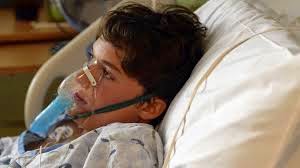 
Twin Cities internist Chris Foley is a faithful reader whom I know in his professional capacity. Today he writes to address the case of the mystery virus:

It might be worth a short commentary re the connection between the sudden “mystery” virus that is hospitalizing children all over the US and the indiscriminate distribution of illegal alien kids “all over the US.” To wit: “Human rhinoviruses and enteroviruses in influenza-like illness in Latin America.”

‘Tis anything but a mystery, yet the MSM appears utterly blinded.

This is basically the same virus commonly seen in the equatorial Americas and South America. The very odd emergence of this virus at this time – especially just prior to the new school year and now fueled by the congregation of children in schools – demands an explanat


The Centers for Disease Control and Prevention, warning hospitals and doctors that “now is the time to prepare,” has issued a six-page Ebola “checklist” to help healthcare workers quickly determine if patients are infected.

ion. The only plausible one is that this has been brought here from south of the – now non-existent – border.

Of course no one in the MSM wants to speculate where this virus is coming from:


A respiratory illness that has already sickened more than a thousand children in 10 states is likely to become a nationwide problem, doctors say.

According to Mark Pallansch, director of the Division of Viral Diseases at the CDC, similar cases to the ones in Colorado have been cropping up across the U.S. At least 10 states -- Missouri, Kansas, Illinois, Kentucky, Iowa, Colorado, Ohio, Oklahoma, North Carolina, and Georgia -- have reported suspected outbreaks of human enterovirus 68 and requested CDC support.

It's a mystery doncha know. And this isn't the only disease that's ramping up. The Center for Disease Control is advising us to tighten our lugnuts because the Ebola hemorrhagic fever bug is our next pit stop.

The Centers for Disease Control and Prevention, warning hospitals and doctors that “now is the time to prepare,” has issued a six-page Ebola “checklist” to help healthcare workers quickly determine if patients are infected.

And why stop there? Under Obama's administration we'll all enjoy the return of the Black Plague and leprosy.

They coulda beat Arizona.
They shoulda beat Arizona.
But they shot themselves in the foot with penalties, fumbles and dropped passes.
And that was in the fourth quarter alone.
Cruz broke their hearts and someone please show the Giant corners and safeties that 5 yards is only fifteen feet, not fifty...
Last year the Giants went 0 and 6 before winning a game. Might be another long season, but - hey - Buffalo is 2 and zip!

The Chive lists some truly unusual reasons why people split up. 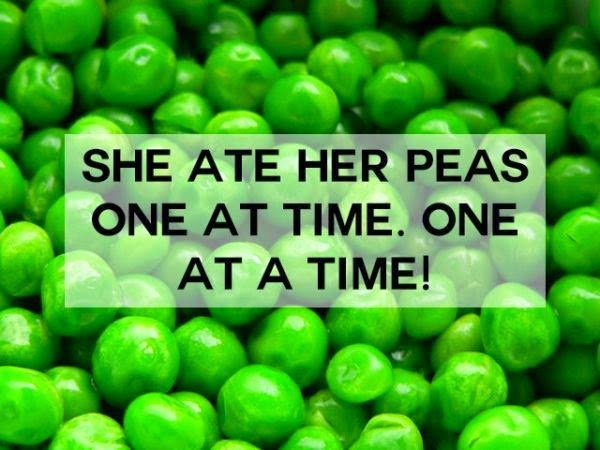 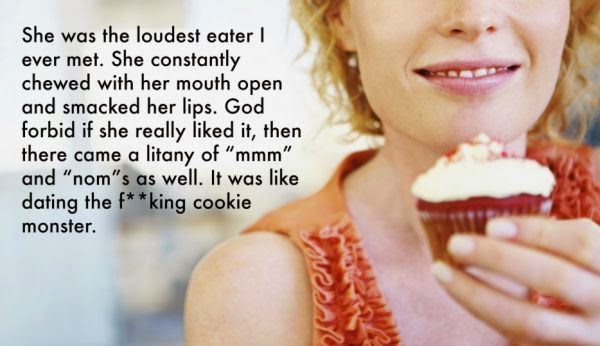 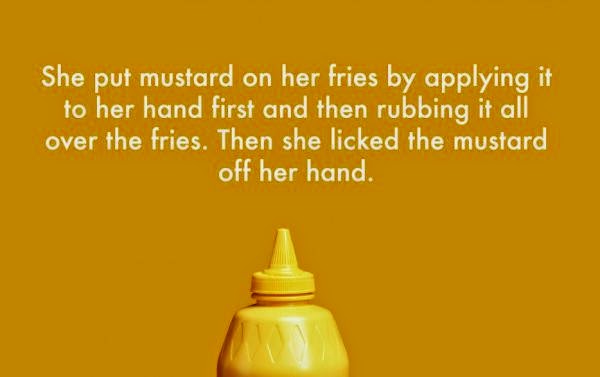