A group of House lawmakers is moving to strip the armed services’ civilian leaders of the power to revoke combat valor awards in response to Army Secretary John McHugh unilaterally canceling the Silver Star, one of the military’s highest honors, for a former Green Beret officer.

Mr. McHugh took the action against Maj. Mathew Golsteyn, who braved repeated enemy fire in Afghanistan, even though he has not been charged with any offenses. The Army now is seeking to release him with a less-than-honorable discharge. The officer plans to fight the move, his attorney says.

The secretary acted after the CIA informed the Army that Maj. Golsteyn, during a polygraph exam for a job application, told of killing a terrorist who was making improvised explosive devices (IEDs), the weapon that has killed more Americans in Afghanistan than any other. The Army also removed Maj. Golsteyn from the elite ranks of the Green Berets.

You may very well guess what my reaction to this is:

Every morning at the Pentagon you’ll see him arrive
He stands five foot six and weighs one ninety-five.
Kinda narrow at the shoulder and broad at the hip
And everybody with a medal knows it’ll soon be stripped
By Dickless John

Then came the day Maj. Golsteyn won a star
Saved a bunch of soldiers in a battlefield afar
There was a lot of shootin’ and hearts beat fast
Major Golsteyn showed bravery that was unsurpassed
‘Cept to John
Dickless John

Ya see, Major Golsteyn killed a terrorist
But didn’t read him his rights or some other shit
So Dickless John had to make his move
He yanked that medal ’cause he had to prove
He’s Dickless John

If you visit the Pentagon in a year or two
You may hear Dickless John try to misconstrue
Why he yanked that Silver Star from Maj. Golsteyn’s chest
It was because of honor and Dickless John knows best
But if you ask any soldier from Fort Bragg to Seoul
It’s because Dickless John ....... is a fucking asshole.

Email ThisBlogThis!Share to TwitterShare to FacebookShare to Pinterest
Labels: Heros, Idiots, US Army

There's A Table In Hell Reserved For The Clintons

Remember when the Chinese intercontinental ballistic missile program was measured in the length of a football field instead of leagues?

Remember when we all assumed that the highest political positions in this country would not sell out our national interests to the highest bidder?

I remember. So does the Washington Examiner.


Foreign donors are refusing to say why they sent millions of dollars in 2014 to the Bill, Hillary and Chelsea Clinton Foundation.

Of 38 donors listed on the foundation's website who were contacted by the Washington Examiner,18 declined to answer at all, and the other 18 either responded suspiciously or stuck to generalities and refused to address follow-up questions.

Why are we surprised? The shock value of the Clinton Foundation's mendacity/perfidy (running out of descriptive nouns here - someone give me a hand) should have been anticipated given the massive transfer of missile/nuclear weapons technology that occurred during Billy Jeff's administration.

Clinton was in office three years when the crash of a People's Republic of China Hughes/Loran satellite launch (February 1996) alerted American officials that the PRC had obtained sensitive missile technology and encryption techniques from US corporations.

This investigation lead to other startling revelations. The Chinese had gained access to US neutron bomb technology as well as the W-88 warhead. The Hughes and Loral Corporations had assisted the PRC in developing the capabilities of their missiles.

Still, the Clinton administration stymied investigative efforts to uncover the theft of nuclear secrets and refused to initiate recommendations for background checks of foreign visitors to the nation's nuclear laboratories for 17  months.

Much of this is documented in the Cox Report, otherwise known as the Report of the Select Committee on U.S. National Security and Military/Commercial Concerns with the People's Republic of China.

And what did Clinton do after the uproar of the Cox Report? He approved the transfer of even more technology to China.


WASHINGTON, May 10— The Clinton Administration notified Congress today that it had approved the export of technology to China to permit the launching of a communications satellite aboard a Chinese rocket next month.

President Clinton said in a letter to Congress that the transfer would not harm national security or significantly improve China's military capability in space. The President was required under a 1998 law to certify that all such technology exports are in the national interest.

The certification was the first such notice to Congress under the law, which was passed in the aftermath of a Congressional uproar last year over the transfer of sensitive missile technology to China.

Mr. Clinton's notification also follows by less than a week the release of a report by the Senate Select Committee on Intelligence, which concluded that lax monitoring of the launching of American-made satellites aboard Chinese rockets had enhanced the accuracy of China's ballistic missile arsenal.

And who was the President's National Security Advisor during this period? The person assisting the President in developing a rational response to this incursion into America's most sensitive military technology? Why none other than Mr. Sandy "Hot Pockets" Berger, who was caught stealing and destroying classified documents from the National Archives.


According to reports from the Inspector General of the National Archives and the staff of the House of Representatives' Government Operations Committee, Mr. Berger, while acting as former President Clinton's designated representative to the commission investigating the attacks of September 11, 2001, illegally took confidential documents from the Archives on more than one occasion. He folded documents in his clothes, snuck them out of the Archives building, and stashed them under a construction trailer nearby until he could return, retrieve them, and later cut them up. After he was caught, he lied to the investigators and tried to shift blame to Archive employees.

Now let's return to another transfer, this time of cash from the Chinese to the Clinton's; back to the Washington Examiner article.


The importance of who gave to the foundation and why was highlighted this week when CBS News revealed that one donor in 2013 was Rilin Enterprises. Rilin is headed by Wang Wienlang, a Chinese businessman who was invited to join the National Peoples' Congress as a delegate in the same year as he made the donation.

Rilin is close to China's national security and intelligence agencies. Besides the $2 million given to the Clintons' foundation, Rilin also spent at least another $1.4 million in 2012 lobbying Congress and the U.S. State Department, of which Hillary Clinton was secretary of state.

And that's just one. single. donor.

Here's another; Bernard Schwartz, of Loral Space and Communications Corporation - the guy whose satellite crash opened up this can of worms. He's a big time donor for Clinton and the dems:

Around the same time, Schwartz asked to be included on a trade mission being organized by then-Commerce Secretary Ronald H. Brown to China, where his company hoped to win a piece of the growing telecommunications market. On the trip, Brown arranged a meeting for Schwartz and a rival industry executive with the Chinese communications minister – a session that, as Schwartz recalled it yesterday, "helped open doors that were not open before."

The Clinton administration has been good to Bernard Schwartz, and he to it. Schwartz, a lifelong Democrat and longtime political donor, dramatically ratcheted up his giving after President Clinton took office, contributing a total of more than $1 million to Democratic party committees since then.

More on Schwartz' political donations here. It's amazing how those donations decreased once Billy Jeff left the Oval Office and Loral Space was no longer under government scrutiny.

The Clintons are rolling in cash. The Chinese gained billions and billions of dollars in American military technology created through the largesse of American taxpayers and we didn't even get a fucking eggroll out of it.

They Should Have Sent The Dog 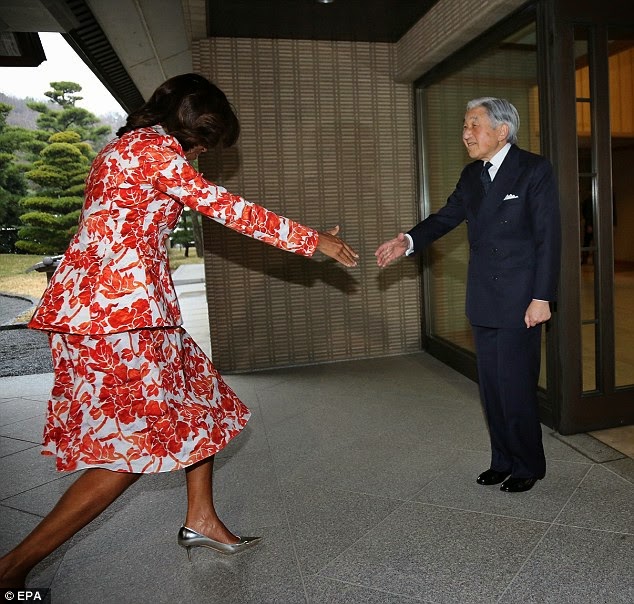 
Michelle Obama has had an awkward start to her visit to Japan as she was pictured towering over Emperor Akihito and stumbling as she tried to bow, shake his hand and curtsy at once.

But all was well after the Emperor gave her a treat.


The First Lady, dressed in a florid combination of a blazer and skirt, dwarfed the Emperor in her silver stilettos, while he maintained his composure and smiled politely.

She then squatted slightly while shaking his hand, seemingly trying to disguise the difference of height between them.

She really, really liked the treat but the Emperor brought only the one.


Mrs Obama, who is 5ft 9in tall, also caused embarrassment earlier in the day when she grabbed Akie Abe, wife of Japan's Prime Minister Shinzo Abe, in a hug-and-handshake combination while the Japanese First Lady was trying to bow.

The last incident was explained as a simple mistake; the First Lady thought Mrs. Abe was dressed like a french fry.

Fortunately the Air Force jet carrying her condiments and chili dogs was refueling in Guam so Mrs. Abe was in no danger.
Posted by sig94 at 4:15 PM 8 comments:

And It's Bibi For Six 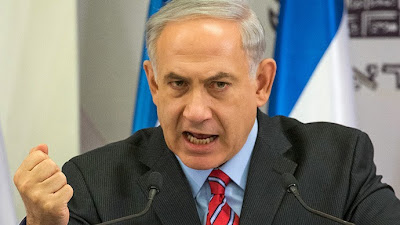 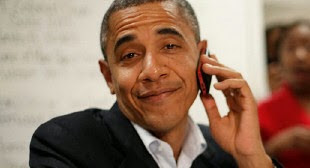 But, instead, we got this clown.

Obama brought his Dooms Day Defense into the game. They sucked like everything else he does.


When it comes to elections, Israel’s Benjamin Netanyahu is the political equivalent of a scrambling quarterback. During the three-month election campaign that ended Tuesday night, the prime minister fell 20 yards behind the line of scrimmage before evading a savage blitz, escaped a catastrophic sack, then, at the last moment, turned upfield, crossed the line of scrimmage and galloped ahead for a huge gain.

Although Netanyahu’s Likud Party only won about half the number of seats needed to secure a majority in Israel’s parliament, it did so much better than anyone (including Bibi) expected that he seems to have triumphed in the goal he had set for himself last December when he broke up the government he had formed in 2013 and called new elections.

And They Wonder Why We Want To Forget.

Men are forgetful. It's a self defense mechanism that we developed over the ages.


It's official, say scientists, men really do have worse memories than women.

A new US study shows memory loss is a natural part of ageing which doesn’t necessarily mean you’ll succumb to Alzheimer’s.

Declining memory is common to everyone, but it affects men earlier in life – most notably from their 40s.

Dr Clifford Jack Jr. of the Mayo Clinic and Foundation in Minnesota said the findings should reassure people that some level of memory loss is a natural feature of getting older.

[...]Dr Jack said it was unclear why men’s brains tend to decline more rapidly, but supplies of the female hormone oestrogen may help women’s brains stave off neuron damage until midlife.

It's like an estrogen crazed neuron fires off somewhere in their frontal lobe and the next thing you know it's, like, how come you don't wear that shirt I bought you, why did your mother say this, how come you always fart so loud at my sister's house...