There is a great deal at stake for the FBI in their investigation of former Secretary of State Hillary Clinton. It's not just their reputation; their recruiting of top notch people, cooperation with other law enforcement agencies throughout the world - all is at risk if they are perceived to be nothing but a political hack that excuses the worst abusers of power at the highest level of government.


Former FBI agents who worked the notorious 1970s sting operation known as ABSCAM have written FBI Director James Comey to warn that nothing less than the bureau's "reputation" is on the line as the investigtaion into Hillary Clinton's email practices enters a critical phase.

The agents, in a March 16 letter obtained by Fox News, offered their support for Comey and the agents working the email case. But the letter cautioned the outcome would have long-lasting implications.

"Decisions must be made on facts alone. Much is at stake here -- people's trust in the Bureau for years to come, as well as the Bureau's reputation among our allies, partners, and friends as the greatest law enforcement agency in the world,” wrote John F. Good, president of the Long Island Chapter of the Society of Former Special Agents of the FBI.

The US Dept. of Justice will also be tainted if this goes down as I fear it wil. Their prosecutions, their potential witnesses, their jury selection pool - a lot can be affected by the public's distrust of the federal criminal justice system.

We Can Do This Again Mayor de Blasio 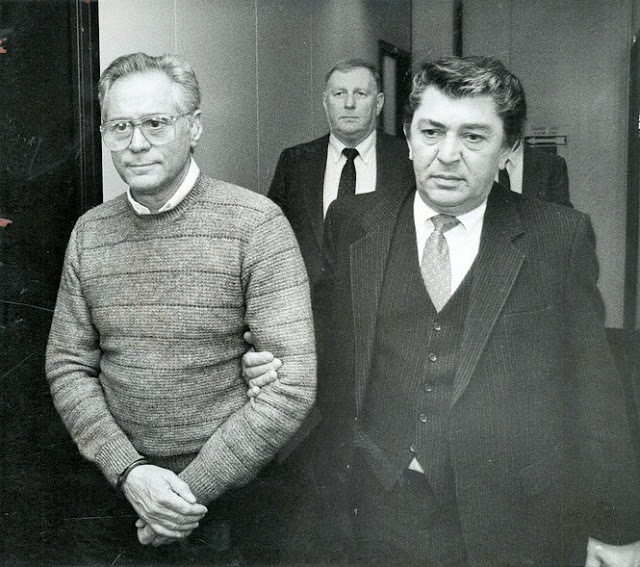 I love this picture! Lee Alexander in cuffs being escorted by FBI agent Phil Looney, March 1989, in a continuing federal grand jury investigation of political corruption in Syracuse.


I remember back in July of 1987 when the feds indicted ex-Syracuse Mayor Lee Alexander for bribery (actually 40 counts of extortion, income tax evasion, racketeering and conspiracy). It was a slow process up to that point but when it broke, it went fast. We had been angling for an investigation of this thieving slob for years and when it finally happened, we were ecstatic. Alexander spent nearly six years in a federal prison. 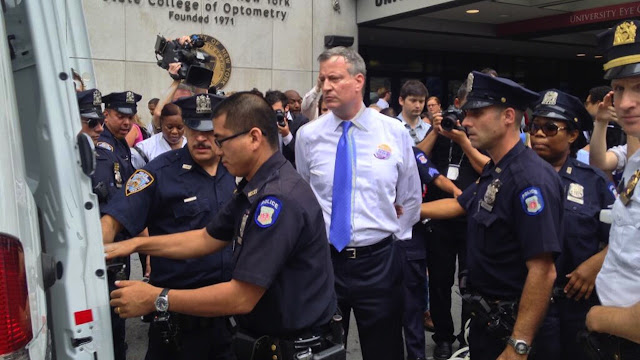 Now almost thirty years later, I imagine that NYPD cops are feeling the same way; there is a growing recognition, a tingly anticipation that Mayor de Blasio will eventually get fitted for bracelets and an orange jumpsuit. Again.


Well, that didn’t take long: Mayor de Blasio has now lawyered up in the ever-widening federal corruption probe by US Attorney Preet Bharara.

To be sure, attorney Barry Berke officially represents the mayor’s 2013 election campaign, and he was officially asked only to reach out to Bharara’s office and offer to help “in any way that we can.”

But it’s another sign that things may be getting increasingly uncomfortable for the folks at City Hall.

And that de Blasio is facing what every public official involved in such investigations dreads: the constant drip-drip-drip of slowly leaking disclosures.

This as the mayor was forced to amend his earlier attempt to downplay his ties to Juda Rechnitz and Jeremy Reichberg, the two civilians reportedly at the heart of a probe that also includes possible high-level NYPD corruption.

Take a look at this mook. 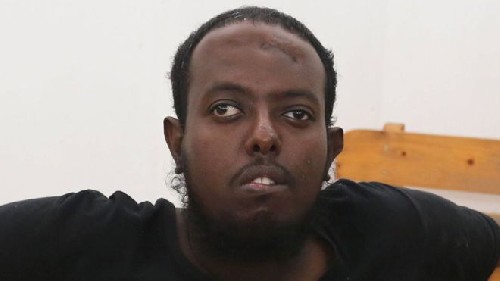 No wonder they slapped a bag over his head before they shot him. 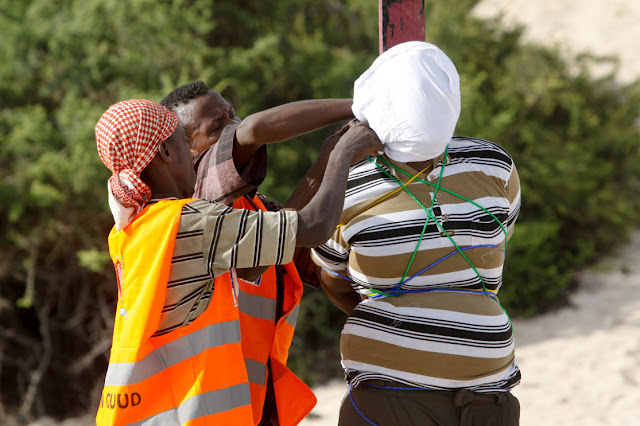 Probably to keep the firing squad from giggling.

It was a close call, either a firing squad or the Bungee Cords O'Death

White House Pussy: We Continue To Be Concerned.


Russian Su-24 planes thundered over the USS Donald Cook at a height of just 30ft in what a military official branded the most 'aggressive' incident between Russia and the United States in years.

The 'simulated attack' maneuver saw the jets pass so close to the ocean that they created a 'wake in the water', the defense official said.

The shock move came as a Polish helicopter was taking off from the US Destroyer on Tuesday evening.

This is not the first time the USS Donald Cook was was buzzed by Rooskie aircraft.

Somebody oughta swat those flies.

Beretta is opening a new manufacturing facility in Tennessee after abandoning its American base of operations in Maryland.


Gun maker Beretta USA is opening a new factory on Friday, the culmination of generous land and tax offers in Tennessee and restrictive gun laws at its old Maryland location.

Beretta USA is holding a ribbon cutting ceremony at the recently built facility in Gallatin, Tennessee, on April 15, having moved all manufacturing from Maryland.

"We've got plenty of space to expand as well," he said.

He said the new factory is on a 100 acre plot that will feature an outdoor shooting range, unlike the old factory, which had a range in the basement.

Beretta is an Italian gun maker that has been manufacturing guns in Maryland since the 1980s, when it started providing arms to the U.S. military, which required them to be American-made.

Sometimes I Hate The Internet

I hate to get excited, or even hopeful, about news that promises cures for diseases that my friends have. MS is a terrible affliction that affects millions; but in a recent article there apparently is a possible treatment for this disease. This is based on the research by an Italian doctor whose wife was suffering from MS. I really wish this true.


An Italian doctor has been getting dramatic results with a new type of treatment for Multiple Sclerosis, or MS, which affects up to 2.5 million people worldwide. In an initial study, Dr. Paolo Zamboni took 65 patients with relapsing-remitting MS, performed a simple operation to unblock restricted bloodflow out of the brain – and two years after the surgery, 73% of the patients had no symptoms. Dr. Zamboni’s thinking could turn the current understanding of MS on its head, and offer many sufferers a complete cure.

Multiple sclerosis, or MS, has long been regarded as a life sentence of debilitating nerve degeneration. More common in females, the disease affects an estimated 2.5 million people around the world, causing physical and mental disabilities that can gradually destroy a patient’s quality of life.

It’s generally accepted that there’s no cure for MS, only treatments that mitigate the symptoms – but a new way of looking at the disease has opened the door to a simple treatment that is causing radical improvements in a small sample of sufferers.

Italian Dr. Paolo Zamboni has put forward the idea that many types of MS are actually caused by a blockage of the pathways that remove excess iron from the brain – and by simply clearing out a couple of major veins to reopen the blood flow, the root cause of the disease can be eliminated.

And here's the reason why I hate to get optimistic about findings promising a simple miracle cure. A 2013 Canadian medical study disproved Zamboni's thesis. Really; with a name like Zamboni ya gotta figure something is screwy.


The study was solid and well-balanced, Dr. Paul Friedemann of the neurology department at Charité University in Berlin and Dr. Mike Wattjes of MS Center Amsterdam said in a journal commentary accompanying the research.

The study "sounds a death knell" for the disease hypothesis of CCSVI, the pair said. It is "now absolutely clear that no reason exists to allocate any further resources to chronic cerebrospinal venous insufficiency research, be they financial or intellectual."

Meanwhile, even though this study has disproved the theory, Traboulsee will continue to conduct a blinded, randomized control trial of the treatment on 100 people in Vancouver, Winnipeg, Montreal and Quebec City.