And we knew that they probably knew it.

Now, what are we going to do about it??
From Hot Air:

Judicial Watch announced today that it obtained more than 100 pages of previously classified “Secret” documents from the Department of Defense (DOD)and the Department of State revealing that DOD almost immediately reported that the attack on the U.S. Consulate in Benghazi was committed by the al Qaeda and Muslim Brotherhood-linked “Brigades of the Captive Omar Abdul Rahman” (BCOAR), and had been planned at least 10 days in advance. Rahman is known as the Blind Sheikh, and is serving life in prison for his involvement in the 1993 World Trade Center bombing and other terrorist acts. The new documents also provide the first official confirmation that shows the U.S. government was aware of arms shipments from Benghazi to Syria. The documents also include an August 2012 analysis warning of the rise of ISIS and the predicted failure of the Obama policy of regime change in Syria.

[...]A Defense Department document from the Defense Intelligence Agency (DIA), dated September 12, 2012, the day after the Benghazi attack, details that the attack on the compound had been carefully planned by the BOCAR terrorist group “to kill as many Americans as possible.”

As a junior in high school, I worked in a hospital kitchen. Usually I walked to work but every now and then the young assistant chef would pick me up  at home and take me in. He drove a new 1966 GTO, What a car...
Posted by sig94 at 4:30 PM 2 comments:

Email ThisBlogThis!Share to TwitterShare to FacebookShare to Pinterest
Labels: music, Ronnie & The Daytonas

Two Out Of Three

Okay, it's the Daily Mail, but I still wonder:


It’s the most expensive weapon in history but America's F-35 stealth jet has been outperformed by a 40-year-old F-16 jet in a dogfight.

A mock air battle was held over the Pacific Ocean between the cutting-edge F-35 - meant to be the most sophisticated jet ever - and an F-16, which was designed in the 1970s.

But according to the test pilot, the F-35 is still too slow to hit an enemy plane or dodge gunfire. So far it has cost the US military more than $350billion.

And this story alleges that the F-35 has been made more vulnerable when engineers got rid of eleven pounds of safety equipment.

However, the new report from OT&E suggests that getting rid of the PAO shutoff valve could lead to a rupture below the cockpit and ridding the fueldraulic system increases the chance of a sustained fire if exposed.

Total Eclipse Of The Heart

I really shouldn't read the news any more.

NYC's idiot mayor has just endangered seniors and children and a bunch of other people.From the Daily News:

In front of emotional supporters, Mayor de Blasio signed legislation Monday that will prohibit employers from inquiring about a candidate's criminal record prior to a job offer.

"Today I see hope for people like me," said Marilyn Scales, 52, of the Bronx, who said she never has had a full-time job because of her record for dealing heroin.

This woman sold poison to people. She shouldn't be allowed to have a paper route. In many other countries she'd be in jail for life or rotting in an unmarked grave. Now she's pissing and moaning because she can't get a full time job - like millions of other people who didn't sell heroin.

While NYS law does prohibit asking for an arrest history, it does allow criminal history (convictions) to be viewed, particularly for  businesses such as child day care centers (N.Y. Executive Law 845-B) and other professions where a criminal conviction is enough to remove you from employment considerations.

Perhaps NYC is still allowing these, but I wouldn't be surprised if it doesn't. I hope it can only apply to city-licensed businesses. Can you imagine hiring a convicted rapist to work at a long term rehab center? Or a convicted felon - a thief -  to work at a jewelry store? Or how about Marilyn Scales working in a pharmaceutical warehouse?

These people have lost their minds. No one is responsible for their actions any more. No one need fear any consequences of wrong doing. God forbid anyone should suffer a disadvantage because they're a screw up.
Posted by sig94 at 5:59 PM 2 comments:

More Than A Feeling

Email ThisBlogThis!Share to TwitterShare to FacebookShare to Pinterest
Labels: music, The Orlons 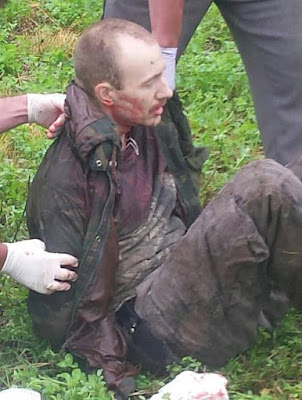 The second escapee from Dannemora has been captured.

Fugitive prisoner David Sweat was shot and wounded during a confrontation with cops searching for him near the Canadian border, law-enforcement sources told The Post late Sunday afternoon.

Sweat, 35, was spotted in Constable, N.Y., by a state police sergeant who tried to talk to him before the bullets started flying, one source said.

Sweat was shot twice before being taken into custody, according to CNN, which obtained a phot​o​ of him bloodied and sitting on the ground, apparently handcuffed and being held by two ​troopers wearing disposable gloves.


In a statement released Friday, the president of the American College of Pediatricians said the Supreme Court’s decision to legalize same-sex marriage will have a significantly negative impact on children in the United States.

[T]his is a tragic day for America’s children. The SCOTUS has just undermined the single greatest pro-child institution in the history of mankind: the natural family. Just as it did in the joint Roe v Wade and Doe v Bolton decisions, the SCOTUS has elevated and enshrined the wants of adults over the needs of children.

The College, which has members in 44 states and in several countries outside the U.S., joined in an amici brief in Obergefell v. Hodges, the case that has led to the legalization of same-sex marriage in all 50 states of the nation.

This unfathomable act is the coup de grace, the pistol shot to the back of America's head ... which was the intent all along of the perverted, degenerate activists who fought for this.


The College itself has maintained that a significant body of research has demonstrated that “same-sex marriage deliberately deprives the child of a mother or a father, and is therefore harmful.”

Now all you idiots out there, go and celebrate with your stupid rainbow selfies.

Sinking Of The HMS Barham

Dramatic Newsreel footage captured the sinking of the Queen Elizabeth Battleship. A salvo of torpedoes from a German submarine struck from close range on HMS Barham on November 25, 1941 in the Mediterranean. Within four minutes, the battleship had listed over to Port and the ships magazines had exploded, sinking the battleship and killing 863 men. The terrifying explosion was caught on film by Pathe cameraman John Turner who was on an adjacent ship.