The Tyranny Of Faux Liberalism

Of all tyrannies, a tyranny sincerely exercised for the good of its victims may be the most oppressive. 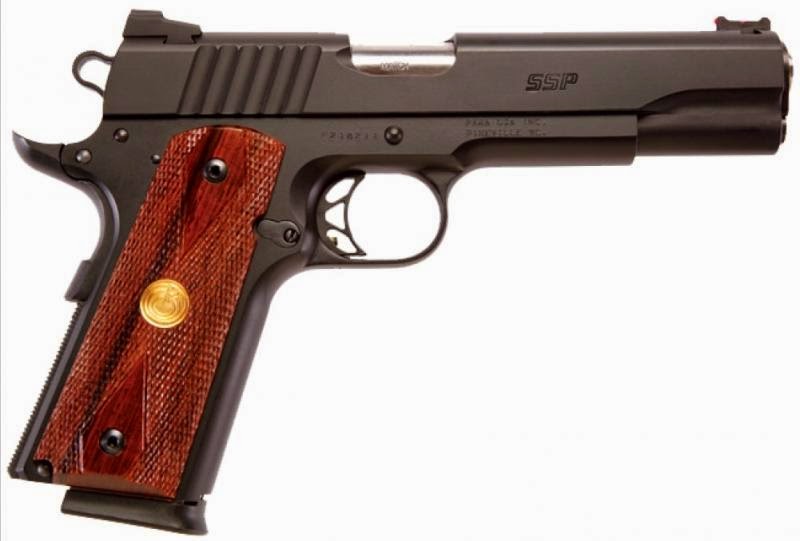 Actor Liam Neeson gets into trouble when he utters syllables neither written nor scripted by someone with a brain larger than a walnut. From the Blaze:


“Taken” star Liam Neeson might brandish an assortment of firearms in the movies, but the Hollywood actor is firmly in favor of gun control and believes America has “too many f***ing guns.”

Neeson made the recent comments while speaking about the recent terror attack against French satirical magazine Charlie Hebdo.

“First off, my thoughts and prayers and my heart are with the deceased, and certainly with all of France, yesterday. I’ve got a lot of dear friends in Paris,” the 62-year-old said actor said,

“There’s too many f***ing guns out there,” Neeson continued. “Especially in America. I think the population is like, 320 million? There’s over 300 million guns. Privately owned, in America."

"There's too many f***ing overrated, overpaid, undertalented actors out there," sig94 continued. "Especially in Hollywood. I have read that something like 120 thousand? are registered in the Screen Actors Guild - most of them are idiots who couldn't find their asses in the dark with a flashlight and a hot curling iron. And we're supposed to give credence to their cocaine-infused mumbling?"

“I think it’s a f***ing disgrace,” the actor added. “Every week now we’re picking up a newspaper and seeing, ‘Yet another few kids have been killed in schools.’”

Neeson, who is known by many for his role as a trigger-happy ex-agent, doesn’t think his views on guns are hypocritical.

“It’s in the movies, you know?” he said, according to Gulf News. “I think it can give people a great release from stresses in life and all the rest of it, you know what I mean? It doesn’t mean they’re all going to go out and go, ‘Yeah, let’s get a gun!’”

"I think it's a f***ing disgrace," sig94 added. "Every week now we're picking up a newspaper and seeing, 'Yet another few dozen women and children are slaughtered or pressed into slavery by Muslim terrorists. We're seeing hundreds of men shot, crucified or their heads cut off and not a single f***ing Hollywood liberal speaks out against it.'"

Sig94, who is a conservative, retired police officer, thinks that Neeson's views on guns are incredibly hypocritical and that his huge, ego-inflated head is stuck up his ass.

"It's in the movies, you know?" he said according to his blog. "I think media violence may perhaps distract people from their stressful lives for a few moments, but that is merely a temporary over-priced patch. In no way is it a fix. As soon as they get in their cars and drive home, the factors that caused the stress in the first place leap out and grab them by the throat again, Now that they've seen hundreds of mucked up pictures showing how a gun can improve their lot, does it surprise anyone that they're going to go out and go, 'Yeah, let's get a gun!'"

It has been well documented that exposure to media violence desensitizes children and they are far more likely to act out in an aggressive manner than children who do not experience this exposure. The societal consequences of growing to maturity in a violence laden culture apparently escapes the attention of Hollywood elites like Mr. Neeson.

Mr. Neeson's self-centered response indicates his need for release from financial stresses in life and a good swift kick in his tall, skinny ass. Just be careful not to hit him in the teeth.


PARA USA, the firearms company that provided guns for use in the movie “Taken 3,” is cutting all ties with the film’s star, Liam Neeson, after he made a number of fiery anti-gun comments in a recent interview.

“While the film itself is entertaining, comments made by its Irish-born star during press junkets reflect a cultural and factual ignorance that undermines support of the Second Amendment and American liberties,” the company wrote in a Facebook post on Thursday. 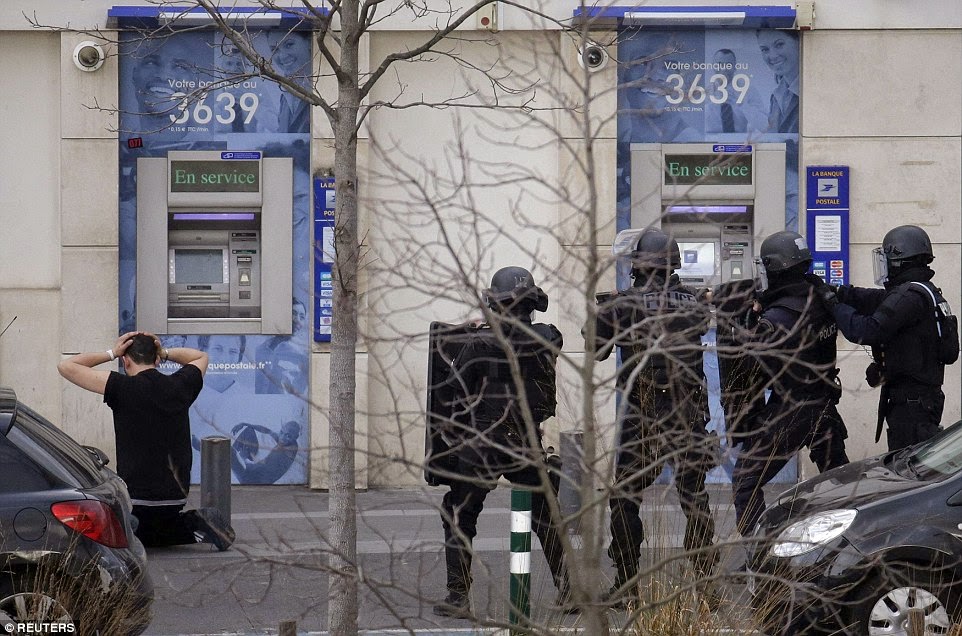 
The latest Paris hostage crisis ended without bloodshed today after a gunman who claimed he had a Kalashnikov and grenades surrendered to police.

In a sign of the increasingly tense atmosphere in the city, the alarm was raised just before 1pm, with reports of a 'terrorist incident' in Colombes.

Dozens of armed officers trained their weapons on a post office where the man had reportedly taken people hostage.
But it turned out to be a 31-year-old 'depressed and unstable' local man on medication who had 'romantic problems'.

Dramatic pictures show the suspect holding his hands in the air after emerging from the post office as armed police point their weapons at him.

He is made to kneel on the ground as officers move in to handcuff him, all the time aiming their guns at his head. The hostages escaped unharmed.

The Mayor of Houston just got spanked. She tried to derail a jury trial instigated by local pastors against her efforts to muzzle them. The judge denied the emotion.


A group of pastors suing the city of Houston and its first openly lesbian mayor just got a piece of very good news.

Harris County District Court Judge Robert Schaffer ruled Tuesday against a motion by the city to deny the pastors a jury trial and instead have a decision rendered by a “special master.”

Mayor Annise Parker made national headlines when she and her city attorney issued a subpoena to area pastors involved in the suit, demanding copies of their sermons.

The conflict began when the major and council members enacted a new ordinance allowing transgender individuals to use city facilities such as public restrooms designated for either sex. 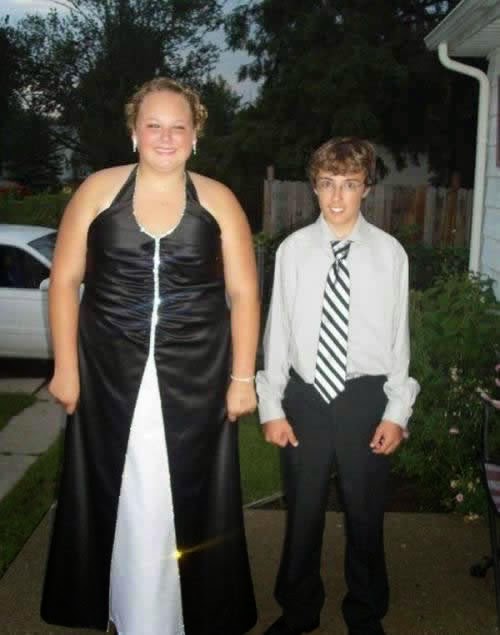 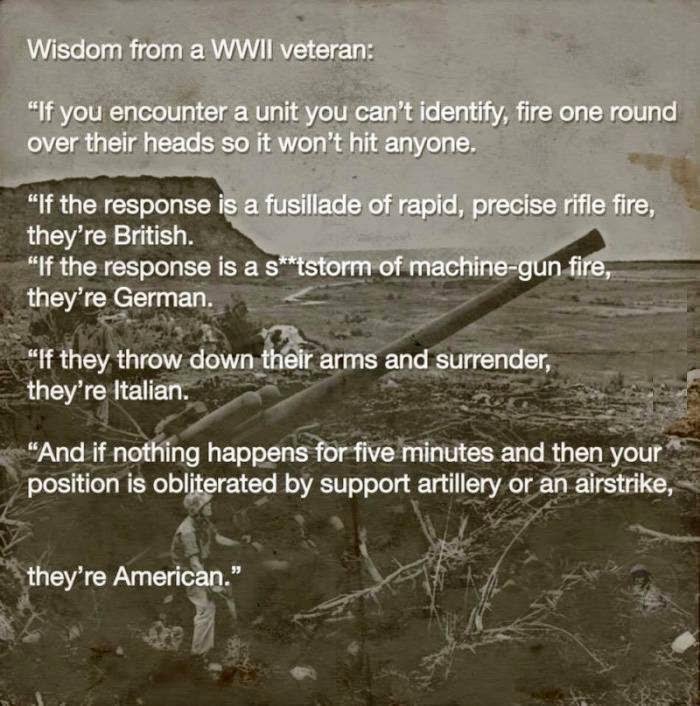 Email ThisBlogThis!Share to TwitterShare to FacebookShare to Pinterest
Labels: US Military, WWII

The Man Who Wasn't There 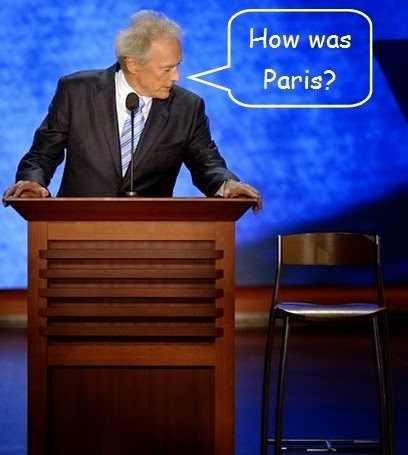 H/T to Lucianne for this photo


On Sunday, as more than a million marchers took to the Paris streets and 44 heads of state joined arms on Boulevard Voltaire, there was one notable absence.

At least, the absence was noted by many of Barack Obama's critics, who slammed the US president for failing to attend the French unity demonstrations following the attack on the satirical magazine Charlie Hebdo.

CNN's Jake Tapper said he was "ashamed" that Mr Obama, Vice-President Joe Biden or any other "high-level" US official failed to stand alongside leaders from the UK, Israel, the Palestinian authority, Germany and Jordan.

"I get that the president visited the French Embassy in Washington and that Secretary of State John Kerry spoke in French, and I certainly understand that the American commitment to security in Europe rivals no other," he writes. "But with all due respect, those are politicians spending money that they didn't earn and sending troops whom they don't know." 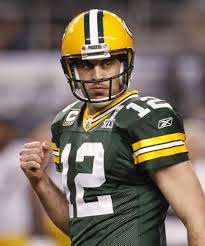 Aaron Rodgers sparked a little internet fury when he barked out a "New York Bozo" audible during the first quarter of the Cowboys-Packers game yesterday.

One site is calling it a slam at NYC Mayor de Blasio:

Yahoo Sports is calling it a Chris Christie slam, even though he's the governor of NJ.

And Rodgers? He says it means nothing.

Somebody ... Make Up Your Minds 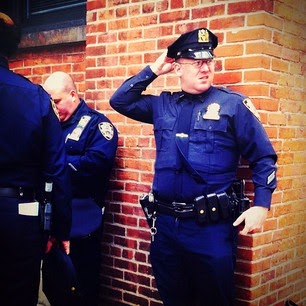 Just what the f**k do you people want?

Sometimes it just ain't worth while getting out of bed and strapping on your gear.

First they scream at you for being too aggressive and writing too any tickets, then you get threatened for not being aggressive enough. From the NY Post:

At precincts across the city, top brass are cracking the whip on summons activity and even barring many cops from taking vacation and sick days, The Post has learned.

Throughout the city, precincts are being ordered to hand up to borough commanders “activity sheets” indicating the number of arrests and summonses per shift, sources told The Post.

“Police officers around the city are now threatened with transfers, no vacation time and sick time unless they write summonses,” one union source said.

“This is the same practice that caused officers to be labeled racist and abusers of power.”

So you've got politicians, activists and community organizers attacking you from one side and the brass preparing a massive blue enema on the other. Reminds me of that Ricky Nelson song, "Garden Party " where he sings, "You see, ya can't please everyone, so ya got to please yourself."


It’s hard to miss the irony: The same people who have called for an end to Broken Windows-style policing in New York City now blast cops for engaging in a work slowdown.

The NYPD essentially stopped writing tickets for minor offenses in the week following the Dec. 20 assassination of officers Rafael Ramos and Wenjian Liu.

A New York Times editorial called the slowdown a “public act of extortion” and called on the leaders of the Patrolmen’s Benevolent Association to abandon it.

Right. But only five months earlier the same people at the NY Times were lambasting the cops for exactly the opposite reasons:


The mayor and the commissioner should also begin a serious discussion of the future of “broken windows” policing, the strategy of relentlessly attacking petty offenses to nurture a sense of safety and order in high-crime neighborhoods, which, in theory, leads to greater safety and order. In reality, the link is hypothetical, as many cities and towns across the country have enjoyed historic decreases in violent crime since the 1990s, whatever strategies they used. And the vast majority of its targets are not serious criminals, or criminals at all.

However, current and former officers have voiced frustrations with a de facto arrest quota system that has long existed in the NYPD. And after the change in the stop-and-frisk policy, some say the arrests that were once made as a result of offenses discovered through the searches have been replaced with an increased focus on minor quality-of-life offenses like public intoxication and turnstile jumping. Critics inside and outside of the department argue this new approach is also discriminatory towards African-Americans and Latinos.

And people are wondering why the cops are saying "screw it."