Beam me up. Quantum physics says so.

Some new technology for ground pounders. I wonder long long before we see this issued?

Email ThisBlogThis!Share to TwitterShare to FacebookShare to Pinterest
Labels: Technology, US Military 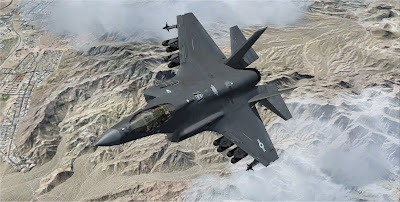 I wonder if we're using parts made in China.


The U.S. military said it had grounded the entire fleet of 97 Lockheed Martin Corp F-35 fighter jets until completion of additional inspections of the warplane's single engine built by Pratt & Whitney, a unit of United Technologies Corp.

The Pentagon's F-35 program office, Air Force and Navy issued directives on Thursday ordering the suspension of all F-35 flights after a June 23 fire on an Air Force F-35A jet at Eglin Air Force Base in Florida.

The Pentagon said U.S. and industry officials had not pinpointed the cause of the fire, which occurred as a pilot was preparing for takeoff. The pilot was not injured.

The incident is the latest to hit the Pentagon's costliest weapons program, the $398.6 billion F-35 Joint Strike Fighter. It followed an in-flight oil leak that triggered mandatory fleetwide inspections of the jets last month.

"Additional inspections of F-35 engines have been ordered, and return to flight will be determined based on inspection results and analysis of engineering data," the Defense Department said in a brief statement issued late on Thursday.

There has been much criticism of the F-35 project over the years. With all the billions spent on it, I only hope that they can straightened the mess out.
Posted by sig94 at 8:35 AM 1 comment:

Getting "Acclimated" Is The Key

Eighty miles west of here the City of Rochester, NY, has a problem with Asian immigrants.

Asians insist on on getting the crap beat out of them by blacks and the City is not responding; in fact, it appears that these incidents are not even being reported.


The newspaper of record in Rochester is sorry about the 1,000 cases of black on Asian violence over the last several years. Specifically, the editors are not apologizing for ignoring the racial violence, which they did for years, but for finally writing about it after it became too bloody and blatant to pretend it was not happening.

The June report in the Democrat Chronicle that prompted the journalistic second guessing featured interviews with public officials and immigrants who gave details of the unrelenting racial violence visited upon recent immigrants from Nepal and Burma, all by black people in Rochester.

[...] The reaction from black leaders in Rochester is also strangely casual.

The former police chief, James Sheppard, who is black, told the Democrat Chronicle the immigrants will “eventually acclimate” to their new “harsh environment.”

I am sure that once you become acclimated to having your bell rung or a gun shoved in your face every time you walk out of your home, that life will improve greatly.

Seriously, this idiot is one of the reasons why Rochester is in the shape it is.

Used Car Salesman Of The Year

Who remembers Ralph Williams in SF area? Big time car salesman. This is one of the greatest commercials ever seen and it only aired once. During the late 60s, most television programs and commercials were live. There were no "pre-recorded" programs. There were some obviousproblems with this method. No "retakes" and "bloopers" were a regular occurrence. He quit right after this commercial. This is no blooper. This guy was just upset with his boss and told it like he thought it was. What a great job of ad-libbing. He never misses a beat, if you listen carefully, you'll hear the cameraman and soundman lose it.The commercial got on air, but only once.

I seriously doubt this commercial was ever aired. Contrary to what the accompanying blurb has to say, there was extensive use of videotaping in the sixties. The technology was first developed in 1951 and was first used on The Jonathan Winters Show on October 23, 1956.

Apparently this was a gag outtake made by the salesman during the commercial's videotaping ... how else would it have been been saved?
Posted by sig94 at 7:00 PM 2 comments:

There Is A Cure For Stupid

Email ThisBlogThis!Share to TwitterShare to FacebookShare to Pinterest
Labels: Crime and Punishment, Idiots

The legislators who passed these laws should aso be forced to pay restitution and interest for the dues forcibly removed from these health care workers paychecks.

From the Washington Free Beacon:


The Supreme Court ruling that struck down coercive union membership among Illinois home health workers could cost unions tens of millions of dollars, according to labor observers.

The court ruled 5-4 that Illinois Gov. Pat Quinn (D.) violated the First Amendment when he forced home health care workers, many of whom were caring for sick family members, to pay union dues. The ruling will impact the SEIU and AFSCME, the two unions that earned millions from the scheme, according to Paul Kersey of the Illinois Policy Institute.

“There’s $20 million a year they are used to getting from home care people and [home] daycare people and they won’t be receiving that soon,” he said. “This should bring an end to that.”

[...]The decision could strike a devastating blow to national labor groups, despite the fact that home health care workers in Illinois paid as little as $30 a month to the unions, according to Semmens.

The National Right to Work Committee said that the Harris fight was the beginning, rather than the end of its push to end coercive public sector unionism.