The Grace Of God, Mathematically Speaking

God's grace fills His creation. It is manifested in everything conceived by man.
Posted by sig94 at 5:00 PM No comments:


I really wanted to see Triumph poop on the Occupiers, but it probably wouldn't have made much of an impact on their personal hygiene.
Posted by sig94 at 9:16 PM No comments: 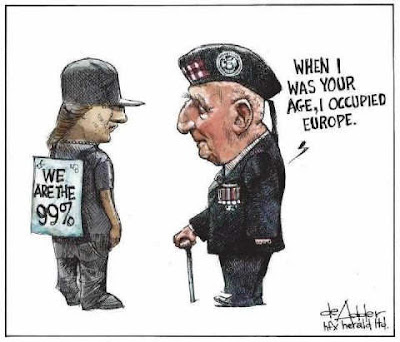 None of these self-absorbed, shiftless "Occupy" wankers can hold a candle to generations past. Sadly, the generation that fought so nobly and suffered such horrific loses are almost all gone.

In Uncertain Times, Size Does Matter 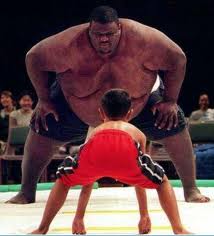 We recently learned that, due to budget cuts,  the British Navy is not able to deploy a surface warship to provide a 24 hour emergency response capability. Of course England is not at war right now even though her forces are involved in Afghanistan and, until recently on a limited basis in Libya.

But how much is enough in so-called peace time?

Truth be told, the US did not have a modern  battleship until 1895 when three were added to the fleet: the USS Maine, USS Indiana and the USS Texas. The USS Massachusetts and the USS Oregon came on line a year later. Of course we lost one of them, the Maine, on 15 FEB 1898 which brought us into conflict with Spain. The cause of the explosion that sank the Maine is now questioned. In any event, the Maine was re-floated and then scuttled at sea in 1912.

From the following site, Naval History and Heritage Command, we see the US Navy increase it's capacity for surface warfare dramatically after the loss of the Maine and the declaration of war. Of course this involves the cooperation of Congress to approve the funds necessary to build these war craft. Look at the increase in size of the "Steel" Navy. 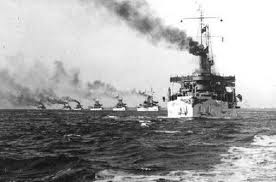 
For a decade after the end of the Spanish American War, the fleet grew to about 175-180 ships. Uncertain political conditions in Europe saw the fleet increase to 245 vessels prior to the commencement of WWI hostilities. Look at the difference in the number of battleships, destroyers and cruisers from the prior war against Spain. By Armistice Day our fleet had increased by over 200%. But this was nothing compared to what would happen to our Navy less than three decades later.


By 1924 the fleet had been reduced down to 137 surface warships and 376 total active vessels.  However, the biggest decrease was in the number of gunboats, from 350 to only 37. The number of battleships and cruisers were reduced by almost a half.  When the Great Depression hit, it got worse. Nothing changed much until the late 30's and then - 1940 when even the doves and isolationists in Congress saw the handwriting on the wall.


*Surface warfare ship totals do not include submarines, mine warfare, patrol or auxiliaries

By 1943 the US Navy had more ships than all other combatant nations combined - that includes allied and enemy navies - the Brits, the Canadians, the Fwench, the Germans, the Japanese, the Italians, everyone. 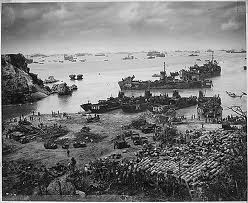 The end of WWII saw peace dividends realized through the shrinking of our armed forces.  By 1950 we were down to 634 warships, less than a tenth of our WWII levels.  But as the Cold War heated up, our Navy increased again.  By 1968, during the peak of the Vietnam War, we were at 932 warships


The question still remains before us.  How much is enough? Naval technology has come a long ways to be sure and the capabilities of our warships has changed accordingly.  But it seems that our conflicts are not-state-of-the-art affairs, but more along the lines of combating low-tech thuggish cretins armed with AK-47's and butcher knives.

So if I'm wise I had better leave this question in the hands of military professionals who are vastly more qualified than I to render judgement.  I know they are obsolete and expensive as all get out to man, but I'd sure feel better if we had an Iowa class battleship or three or six floating off the shores of Egypt,  Palestine, Somalia, Iran and Venezuela.  Just to piss them off. 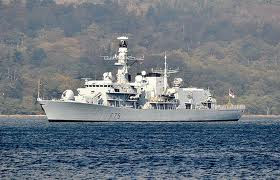 Whatever happened to the cry,"Millions for defense but not a penny for tribute!" that served to straighten the backbone of many a right minded citizen?

Oh, that was the United States - uttered by Robert Harper in1797 after the fwench demanded a bribe to stop attacking our ships - not the British.

Apparently the Brits were not listening either then or now as their run-away social spending to keep the wogs and white trash happy (tribute) has stripped them of their ability to maintain simple, single ship coverage of their island in the event of an emergency.

Defence cuts have left the stretched Royal Navy unable to provide an emergency standby ship to protect British waters for a month.

The Navy normally provides a minimum coverage of a frigate or destroyer fulfilling the role of Fleet Ready Escort (FRE) in order to be able to respond quickly to a potential threat at home or abroad.

However, slashed Defence budgets and the war in Libya has meant there hasn't been a vessel available since the start of October.

The last ship to fill the role, called the FRE, was HMS Portland but that left for war games off the coast of Scotland in October, and it is now having a rest period in Plymouth on the south coast.

Former First Sea Lord Admiral Lord Alan West said: "I would hardly say it is a luxury. If there was a terrorism incident in UK waters, this would historically be the ship sent in to deal with it.

"It's a big problem. If we haven't got a ship ready to do this role then it's worrying. It's a very unsatisfactory position to be in."