If true, this is an interesting turn of events.


The attorney for Pat Smith and Charles Woods has filed an affidavit in federal court asking for a federal judge to enter a default judgment against Hillary Clinton after she failed to respond to a lawsuit they filed in United States District Court in D.C. in August.

Smith and Woods are the parents of American U.S. Foreign Service member Sean Smith, and Navy SEAL Tyrone Woods, respectively. Both died during the September 11, 2012 attack on the U.S. consulate in Benghazi, Libya. They sued Clinton for wrongful death, defamation, and intentional and negligent infliction of emotional distress. The defendants say they served Clinton at her campaign office in Brooklyn, New York.

“Despite having been served in this matter, no appearance has been entered by Defendant Hillary Clinton, no responsive pleading has been filed or served upon counsel for Plaintiffs: no motions for extension of time have been filed,” attorney Larry Klayman wrote in an affidavit. Klayman runs the right-leaning Freedom Watch organization. He says for all of those reasons the Court “is requested to enter a Default against Defendant Hillary Clinton.”

Apparently Hillary was supposed to respond within 21 days of the filing or request an extension. She did neither.

The Muslims are still seething over the Crusades (a reaction to an Islamic invasion of Europe that started in the 8th century) that ended almost 800 years ago (1291).

And now these clowns don't like being reminded of an atrocity that is only 15 years old... 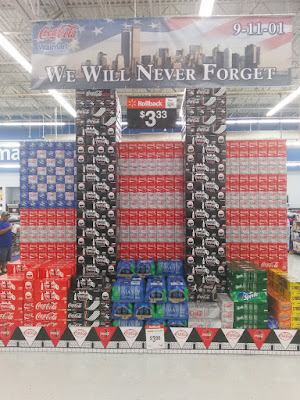 Twitter user Shawn Richard Tweeted a picture of the display, which presented Coke Zero in place of Ground Zero and spurred thousands of angry retweets about the beverage company's marketing ploy.


Weaponize this video, it must go viral. Show it every where.

The woman is sick, physically, emotionally, mentally and spiritually.

Russians Playing Chicken Kiev
Spy plane? Was it wearing a false mustache and dark sunglasses? It is an airborne, electronic intelligence gathering platform. Nothing secret about them other than the equipment they carry; the US has been using them forever. And the Russians do the same thing.


A Russian fighter jet intercepted a US spy plane flying over the Black Sea, according to US Defense officials cited by the Reuters news agency.

The officials said that there were multiple interactions between two aircraft and called the intercept by the Russian jet "unsafe and unprofessional." © FLICKR/ LANCE CHEUNG US Aircraft Reportedly Intercepted by Russian Jet Was in International Airspace - EUCOM The official, speaking on condition of anonymity, said the incident lasted about 19 minutes and the Russian Sukhoi Su-27 fighter came within 10 feet of the US Navy P-8 surveillance plane.


Bumper Cars - Moscow Style
Maybe this guy thought that Putin's ride was a land based, electronic intelligence gathering platform and just buzzed him too close?


VLADIMIR Putin’s personal driver was assassinated by “foreign secret service agents”, it has been sensationally claimed.

The unidentified man died when his BMW was smashed into by a Mercedes on a busy motorway in Moscow.

Now unsubstantiated claims posted on a pro-Putin website claim it was carried out by Western spies.

The presidential BMW was travelling on Kutuzovsky Avenue in the Russian capital when a Mercedes veered from the other side of the road, smashing into it head-on.


WASHINGTON — Nancy Pelosi, the House minority leader, sent a letter on Tuesday to Speaker Paul D. Ryan urging him to bar Republicans from using hacked documents in the campaign, arguing that “defending our democracy is more important than any advantage or disadvantage in this election.”

Ms. Pelosi, calling the hack into Democratic servers, apparently by Russians, “an unprecedented assault on the sanctity of our democratic process,” said Mr. Ryan should not condone either party using materials originating from the cybercrime.

“Democrats and Republicans must present a united front in the face of Russia’s attempts to tamper with the will of the American people,” Ms. Pelosi wrote.

The will of the American people is that the earth would suddenly open up beneath your feet and a legion of winged, laughing demons drag you to eternal flames and perdition.


Hell No! We Ain't Done With The Rooskies!
A brazen, buxom daughter of the Steppes was on a low level mission in the Plaza Hotel when she buzzed former NYS Gov. Eliot Spitzer's crotch and collided with his turgid Mark III ovipositor. Alas, after two months the law suit that was conceived from this loveless union was aborted. The respondent, Ms. Svetlana Travis, returned to the bosom of Mother Russia last February.


[...]Eliot Spitzer has pulled out of a fraud and extortion case against an alleged Russian hooker who accused him of choking her at the Plaza Hotel — less than two months after filing the suit.

“Eliot Spitzer, by and through his attorneys, hereby discontinues the above-entitled action without prejudice and without costs to either party as against the other,” the withdrawal notice says. The legal term “without prejudice” means Spitzer could refile the case in the future.

Papers filed in Manhattan Supreme Court Wednesday say the notice of discontinuance was emailed to the woman, Svetlana Zakharova Travis.

Waiting For The Other Shoe

Will it be a hobnailed combat boot or a ballet slipper?

WikiLeaks founder Julian Assange said Tuesday that his website might release documents related to Hillary Clinton as early as next week.

“The first batch is coming reasonably soon,” Assange said in an interview on Fox news’ “Hannity.” “We’re quite confident about it now. We might put out some teasers as early as next week or the week after.”

Assange recently told Fox News that he was planning to release another batch of documents that could prove “significant” in the general election.

Return With Me To Yesteryear

The Police, They Care.

The Richland, WA Police report finding a man's body in the Columbia River, near the confluence of the Yakima River, at Columbia park. The victim apparently drowned due to excessive marijuana consumption. The dead man's name will not be released until his family has been notified.

The flashlight was on.

Emergency room staff turned off the flashlight and the police removed the Hillary T-shirt to spare his family any unnecessary embarrassment.

In spite of what we sometimes think, the Police do care.

Of course since Gibson is directed the film there are political considerations that must be examined by leftist Hollywood critics.

Mel Gibson has made a movie about a pacifist who served nobly during WWII. It's a testament to his filmmaking chops, and also an act of atonement that may succeed in bringing Gibson back.

Mel Gibson’s “Hacksaw Ridge,” which premiered today at the 73rd International Venice Film Festival, is a brutally effective, bristlingly idiosyncratic combat saga — the true story of a man of peace caught up in the inferno of World War II. It’s the first movie Gibson has directed since “Apocalypto,” 10 years ago (a film he’d already shot before the scandals that engulfed him), and this November, when it opens with a good chance of becoming a player during awards season, it will likely prove to be the first film in a decade that can mark his re-entry into the heart of the industry. Yet to say that “Hacksaw Ridge” finally leaves the Gibson scandals behind isn’t quite right; it has been made in their shadow. On some not-so-hard-to-read level, the film is conceived and presented as an act of atonement.

At the end of the article there are comments that introduced sanity and brought clarity to the entire written piece.

The only persons that Hollywood forgives for anything they’ve done are liberal politicians and especially the Clintons.. And your recent crop of films are all crap and failing miserably at the box office, except for animated movies. One would think you’d figure it out but you’re all too damn stupid.

Last week, the DHS stated that they may provide security oversight for the 2016 elections. That announcement by a corrupt, incompetent government agency sent a chill down my spine.


Even before the FBI identified new cyberattacks on two separate state election boards, the Department of Homeland Security began considering declaring the election a "critical infrastructure," giving it the same control over security it has over Wall Street and the electric power grid.

The latest admissions of attacks could speed up that effort possibly including the upcoming presidential election, according to officials.

Now the government announces that they are investigating the role of the Russians in compromising our electoral process.

U.S. intelligence and law enforcement agencies are probing what they see as a broad covert Russian operation in the United States to sow public distrust in the upcoming presidential election and in U.S. political institutions, intelligence and congressional officials said.

The aim is to understand the scope and intent of the Russian campaign, which incorporates cyber-tools to hack systems used in the political process, enhancing Russia’s ability to spread disinformation.

Like we need the Russians to sow distrust in the Presidential elections.
The table is being set.
Look for this "investigation" to gain more and more publicity as Election Day approaches.

I expect voter fraud to reach unprecedented levels in November; and DHS, like the FBI's Operation Hillary Rescue, will be there to provide cover for the democrats. If voter outrage becomes unmanageable after November 8th, they'll simply blame the Russians.

I also wonder if the success of Brexit in the UK is giving globalists fits here in America. Are they afraid the same voter reaction here in the US will derail their plans? Trump's speeches are resonating with many Americans and the media's concerted efforts to malign him are not succeeding. This could be the globalists Plan B.