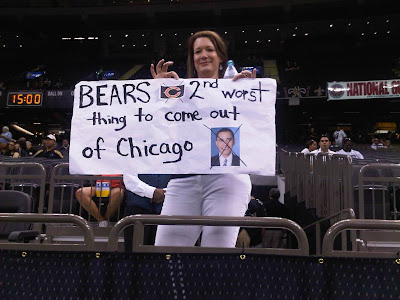 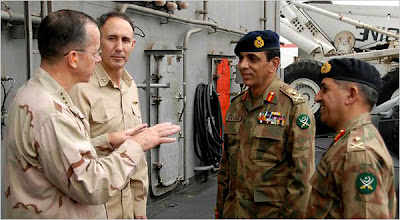 "Please to be excusing me, but Osama Bin Who?"

The Taliban uses the Pakistani border as a "Get Out of Afghanistan Free" card.
Osama Bin Hiden played bridge with his neighbors at the Pakistani military academy.
The Pakistani secret police :"The ISI has become a state within a state, answerable neither to the leadership of the army, nor to the President or the Prime Minister."

So someone, please tell me, what exactly is the downside here?


ISLAMABAD/WASHINGTON (Reuters) - Pakistan warned the United States it risks losing an ally if it continued to accuse Islamabad of playing a double game in the war against militancy, escalating the crisis in relations between the two countries.

Foreign Minister Hina Rabbani Khar was responding to comments by U.S. Joint Chiefs of Staff Admiral Mike Mullen, who said Pakistan's top spy agency supported attacks on the U.S. Embassy and other targets by the Haqqani network, the most violent and effective faction among Islamic Taliban militants in Afghanistan.

It is the most serious allegation levelled by the United States against nuclear-armed and Muslim-majority Pakistan since they began an alliance in the "war on terrorism" a decade ago.

"You will lose an ally," Khar told Geo TV in New York in remarks broadcast on Friday.

Ponytail? Yup. Swiss? Yup. And wait until you hear what he has to say!

This is a powerful, thoughtful, and important speech by a Swiss Member of Parliament who lays out precisely how Islamists intend to dominate Europe and the western world. Not every day that you see a pony-tailed MP denouncing “power lusting holy warriors with social benefits.” He not only explains the threat, but makes clear that we will not give up without a fight.

In The Shadow Of The Teleprompter 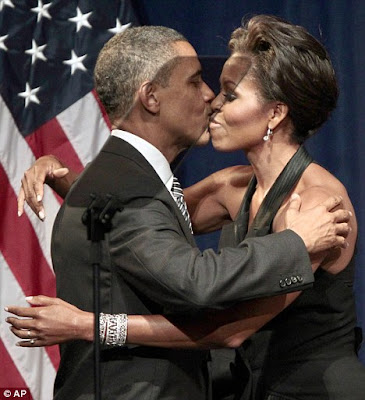 The Dow Jones Industrial average tanked by almost 400 points today, new unemployment claims are over 400,000 again, the black unemployent rate is almost 17% and the First Wookie shows up with $42,000 worth of diamond bling on her snot-smeared, hairy wrist. 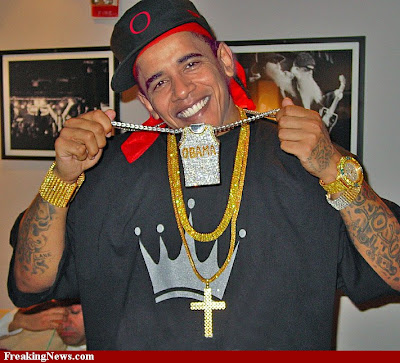 I'm gonna need me some chili n'corn bread tonight to get over this. Maybe I'll splurge with a diet coke too as we watch our 401K's circle the drain.
Posted by sig94 at 7:53 PM 12 comments:

Fill'er Up With Unleaded Ethical Please 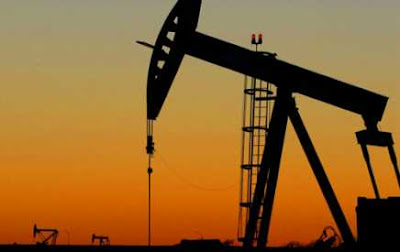 
Kudos to EthicalOil.org. In the space of 30 seconds, the non-profit group has managed to enrage an entire kingdom, put an army of lawyers to work, and make the front page of newspapers across Canada. All thanks to a television ad which does nothing but state a set of facts, and posit a choice between two products, one produced “ethically” and the other “unethically”.

Ethics? Ethics? I got to show you no steeeking ethics infidel.


The ethical product is of course Canadian crude, extracted from the oil sands, while the unethical stuff flows from the oil fields of Saudi Arabia. As the ad points out, Saudi doesn’t allow women to drive, leave their homes without a male guardian present, and values their court testimony at half that of a man. As a timely aside, Newsweek magazine recently surveyed the 165 “best and worst places to be a woman”: Canada placed third, while Saudi Arabia clocked in at a dismal 147th.

But in today’s era of cultural relativism, “ethics” have become a relative term as well. How else can one explain the silence of the left, particularly feminists, on this issue? Instead of valuing the rights of half the human population, most focus their efforts instead on “protecting the planet”. When it comes to fashionable causes, oil-soaked birds take precedence over Saudi girls murdered for having a boyfriend, or women jailed for getting behind the wheel.

The Saudis also llike to lop their heads off for suspected witchcraft, drugs and just about anything else that pisses the Saudis off. And for the past 15 years or so they do it with swords. Here's how it works:

Justice in Saudi Arabia is administered by a system of religious courts according to the kingdom’s strict interpretation of Islamic Sharia law. Judges — appointed by the king on the recommendation of the Supreme Judicial Council — have complete discretion to set sentences, except in cases where Sharia outlines a punishment, such as capital crimes. 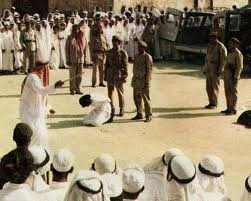 That means no two judges would likely hand down the same verdict for similar crimes. A rapist, for instance, could receive anywhere from a light or no sentence to death, depending on the judge.

But what atrocities have the Canadians perpetrated? There's got to be something about their culture that pisses us off.

He's Just A Handy Guy To Have Around 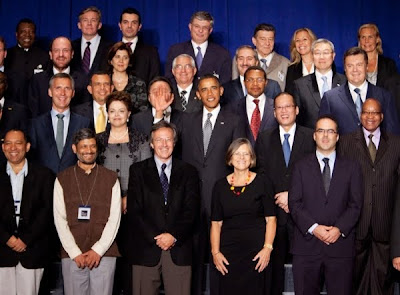 The Bumbler-In-Chief decides that this group photo of United Nations leaders is really his kindergarten class picture.


President Obama turned a group photo op at the United Nations Tuesday into a photo flop when he tossed a wave of the hand, blocking Mongolian President Tsakhia Elbegdorj's face as the camera flashed.

It’s not clear who Obama was waving to or whether he was trying to send a message to the Mongolian leader -- as in talk to the hand because the face doesn't want to hear it. Luckily, the photo op allowed more pictures to be snapped without the exuberant gesture.

"I want to see when the president and his cronies are picking winners and losers… it wasn't because there were large contributions given to them," the chairman of the Oversight and Government Reform Committee said Tuesday morning on C-SPAN.

I want to see the thieves and thugs of the Obama administration behind bars for the rest of their natural lives. What they and corrupt members of Congress have done is unconscionable. Bringing this country to the verge of ruin for their political and personal gain. Let the subpoenas and the "I plead the fifth" echoing from the mouths of Solyndra big wigs flow like manna from Heaven.


[...] Solyndra abruptly filed for bankruptcy earlier this month, surprising both employees and the administration, which had secured $535 million in low-interest loans for the company.

Republicans in Congress quickly mocked the bankruptcy as emblematic of the president's green technology initiatives under the stimulus bill — and noted that a key Solyndra investor had been a bundler for the Obama campaign. House Republicans say they have emails showing the White House pressuring Department of Energy bureaucrats to expedite the loan approvals, although the White House has argued that nothing improper occurred.

Republicans have also charged that the White House pressured an Air Force general to revise testimony before a closed congressional hearing to aid LightSquared, a wireless start-up company. Emails between the company and the White House make mention of the fact that the company's CEO would be attending Democratic fundraisers in Washington, and administration officials met with executives from the company on the same day that CEO Sanjiv Ahuja wrote a $30,400 check to the Democratic National Committee.

Impeach and imprison the whole lot of them.
Posted by sig94 at 5:00 AM 8 comments:

Sailing In Harms Way The US Navy Way 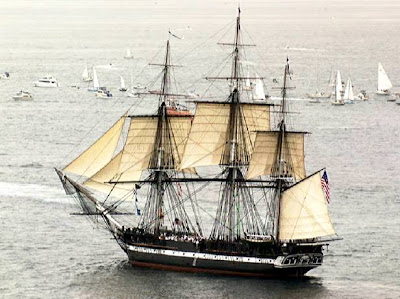 The U. S. S. Constitution (Old Ironsides), as a combat vessel, carried 48,600 gallons of fresh water for her crew of 475 officers and men. This was sufficient to last six months of sustained operations at sea. She carried no evaporators (i.e. fresh water distillers).

Her mission: "To destroy and harass English shipping."

Making Jamaica on 6 October, she took on 826 pounds of flour and 68,300 gallons of rum. Then she headed for the Azores, arriving there 12 November. She provisioned with 550 pounds of beef and 64,300 gallons of Portuguese wine.

On 18 November, she set sail for England. In the ensuing days she defeated five British men-of-war and captured snd scuttled 12 English merchant ships, salvaging only the rum aboard each.

By 26 January, her powder and shot were exhausted. Nevertheless, although unarmed she made a night raid up the Firth of Clyde in Scotland. Her landing party captured a whisky distillery and transferred 40,000 gallons of single malt Scotch aboard by dawn. Then she headed home.


On a lesser note, the wife and I visited the USS Constitution in April of 1984 in Boston Habor. I grabbed a blue information packet which explained some of the ships' rich history. One of the items in the packet told how the Constitution was rehulled back in the 1930's. The oak planks in her hull had already started to petrify from exposure to salt and minerals in sea water.
So much for millions and millions of years needed for petrified wood to form...

Take A Plea, Or Else 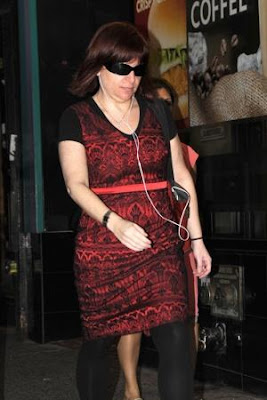 Alisha Smith, 36, who dresses demurely as a buttoned-down prosecutor, turns up the heat when she becomes perky persecutor “Alisha Spark,” a nom de dom she uses when she performs at S&M events for pay, according to a fetish source.

“They pay her to go to the events. She dominates people, restrains them and whips them,” the fetish source said.

At a recent event in which she posed for photos with fellow fetishists, she was espied wearing a skin-tight, see-through latex dress with heart-shaped pasties.

This brings up some fascinating sentencing options for misdemeanors and petit offenses. How about 50 hours of community service or two hours of rawhide n' lace or maybe a session of whip n' chill?


Yesterday, she was removed from her duties -- for which she earns $78,825 annually -- after The Post inquired about her saucy S&M lifestyle.

“The employee has been suspended without pay, effective immediately, pending an internal investigation,” said a spokesman for state Attorney General Eric Schneiderman.

The spokesman would not elaborate on why Smith was being professionally spanked.

Who says that the USA doesn't have a Great Wall? 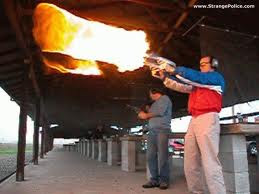 
According to KCBS and Bay City News Service, two bystanders were hit by gunfire after an officer-involved shooting in San Francisco’s North Beach neighborhood early this morning.

According to police, at 2:06 a.m., officers located a wanted person in the 400 block of Broadway. The suspect ran away from police and produced a weapon, they said.

Officers then fired at the suspect, who was not hit. However, two bystanders were hit by the gunfire. They were taken to a hospital to be treated for their injuries that are not believed to be life-threatening, according to police.

The suspect, who was not wounded, was taken into custody. The suspect’s weapon was recovered, police said.

Police did not have information available about how many officers were involved in the shooting or how many rounds were fired.

But, thank God, one of the officers involved was a blind homosexual and the other was a one armed black transgender female. While innocent by standers were certainly in jeopardy, the City's diversity in the work force policy remained safe and intact.
Posted by sig94 at 8:43 AM 9 comments: