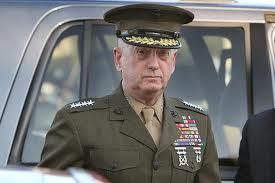 It was President Abraham Lincoln who, made desperate by the continued success of the Army of North Virginia led by Robert E. Lee, said "Give me a General who will fight!"

And now it is President Barack Obama who, made desperate by the continued resistance of American patriots, says "Give me generals who will fight ... their own Countrymen!" And gives the boot to one of America's most competent generals, Marine Corps General James N. Mattis.


General James Mattis is being fired for insisting on complete contingency planning, according to Pentagon reporter Tom Ricks. Truth-telling isn't welcome in this administration, and that means big trouble ahead. General Mattis and the military understand that. The general insisted on full planning for all predictable outcomes.

Obama is a gambler, and he doesn't want to think about what might happen if his wild gambles don't pay off. He is amazingly overconfident. General Mattis is a thinker. He is a responsible combat leader.

And he is being forced out of his position as Commander of USCENTCOM. He is, or was, at the top of my daughter's chain of command.


Word on the national security street is that General James Mattis is being given the bum's rush out of his job as commander of Central Command, and is being told to vacate his office several months earlier than planned.

Why the hurry? Pentagon insiders say that he rubbed civilian officials the wrong way -- not because he went all "mad dog," which is his public image, and the view at the White House, but rather because he pushed the civilians so hard on considering the second- and third-order consequences of military action against Iran. Some of those questions apparently were uncomfortable. Like, what do you do with Iran once the nuclear issue is resolved and it remains a foe? What do you do if Iran then develops conventional capabilities that could make it hazardous for U.S. Navy ships to operate in the Persian Gulf? He kept saying, "And then what?"

These are questions you pose to responsible adults. Sorry General sir, but you have the wrong audience. Better off asking them how the Knicks are doing or if they like bacon bits on their nacho fries.


Inquiry along these lines apparently was not welcomed -- at least in the CENTCOM view. The White House view, apparently, is that Mattis was too hawkish, which is not something I believe, having seen him in the field over the years. I'd call him a tough-minded realist, someone who'd rather have tea with you than shoot you, but is happy to end the conversation either way.

And to further consolidate their positions in the Asshat Hall of Fame, the White House fired the General and didn't even extend him the courtesy of telling him.


Presidents should feel free to boot generals anytime they want, of course -- that's our system, and one I applaud. But ousting Mattis at this time, and in this way, seems wrong for several reasons:

TIMING: If Mattis leaves in March, as now appears likely, that means there will be a new person running CENTCOM just as the confrontation season with Iran begins to heat up again.

CIVIL-MILITARY SIGNALS: The message the Obama Administration is sending, intentionally or not, is that it doesn't like tough, smart, skeptical generals who speak candidly to their civilian superiors. In fact, that is exactly what it (and every administration) should want. Had we had more back in 2003, we might not have made the colossal mistake of invading Iraq.

So what message is the Obama Administration sending? If this is to be believed, it is a chilling message made perhaps more believable by the Administration's accelerated efforts to eliminate the ability of the American people to defend themselves.

On Monday, renowned author and humanitarian Dr. Jim Garrow made a shocking claim about what we can expect to see in Obama's second term.

I have just been informed by a former senior military leader that Obama is using a new “litmus test” in determining who will stay and who must go in his military leaders. Get ready to explode folks. “The new litmus test of leadership in the military is if they will fire on US citizens or not.” Those who will not are being removed.

So, who is the source?

Garrow replied: “The man who told me this is one of America’s foremost military heroes.”

Understand, this is not coming from Alex Jones or Jesse Ventura, or from anyone else the left often dismisses with great ease.

Garrow is a well-respected activist and has spent much of his life rescuing infant girls from China, babies who would be killed under that country's one-child policy. He was also nominated for a Nobel Peace Prize for his work.

Bear With Me On This One 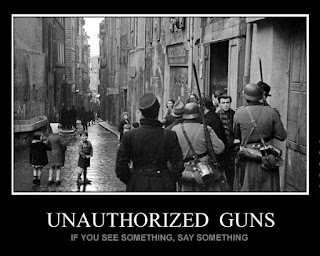 Wausau, WI, under the Obama Reich.

Sorry, Fresh Out Of Hope 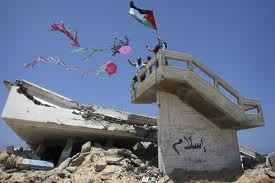 Palestinians Celebrate the Grand Opening of A Sports Arena
The Nazis didn't see much light at the end of the tunnel either. The Palis have broken every treaty they signed.

From the whining, mewling, fascist/terrorist apologists at at Reuters:


Palestinians see no hope for peace in Israeli polls

(Reuters) - Palestinians evinced weary indifference on Tuesday as Israelis voted in an election set to produce a hardline government keener to expand Jewish settlements on occupied land than seek peace.

It's not that they're indifferent; they're just tired of waiting for their 13th Imam to crawl out of his cave and start raising hell with the Joooos.


"Regardless of who wins, the result is the same: Israelis want this land but not the people," said Ahmed Amro, a professor at Al-Quds Open University in Ramallah, the West Bank's capital.

I got news for you Sparky, the Saudis, the Syrians, the Jordanians, the Egyptians, the Yemeni, Qatarians, you name them - they don't want you either. Instead of Palestinians, you should rename yourselves the Black Plaguestanis.


"The Palestinians should have a plan to face this situation we're in, and not put much stock in who wins," he said of the four million people under Israeli occupation or blockade.

All your Muslim buddies saw how you utterly trashed Gaza when the Jooos moved out. Nice plan...


Israel has occupied the West Bank since capturing it in the 1967 Middle East War, along with east Jerusalem, the Gaza Strip and the Golan Heights. Gaza has remained under tight curbs on movement since Israeli soldiers and settlers withdrew in 2005.

After the 1967 war, 800,000 Jews were kicked out of their homes throughout the Near East without any compensation whatsoever. The Muslims were allowed to stay in the conquered territories. If it's so bad, move else where. Oops, my bad, so sad, I forget not one of your Muslim bros wants a festering sore moving in with them. They've got enough problems already.
Posted by sig94 at 5:24 PM 5 comments:

That's Not How You Do It 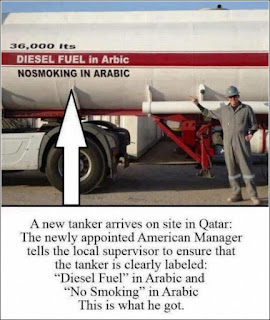 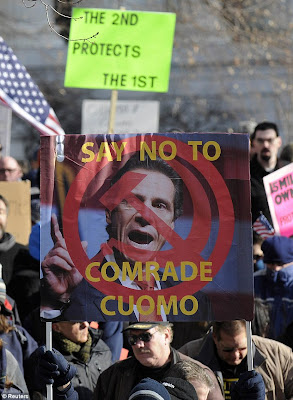 An estimated 2,000 protestors showed up in Albany to manifest their displeasure at NY governor Andrew Cuomo and the NY legislature's new restrictive laws on firearms. 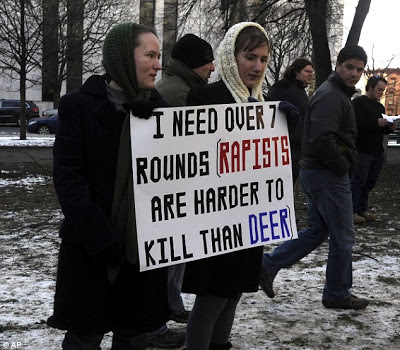 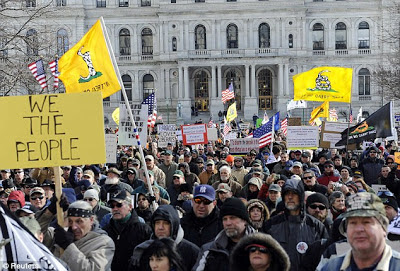