It's The Schools, Stupid

We have had generations of idiots stumble out of our nation's public education system with nary a thought for the future. Far too many of our high school seniors do not know our nation's history or it's geography and they read on a fifth grade level, but they can slap a condom on a cucumber and tell you the advantages of French, ribbed, latex or lamb.

The US Dept. of Health, Education and Welfare (HEW) was signed into law by President Eisenhower on March 12, 1953. Twenty-six years later it was reorganized and the Department of Education was established in October of 1979 under the Carter Administration. The dumbing down of America has been in the works for over half a century. Why is this? It is not an accident. American schools are designed to fail.

Education is a very powerful, inter-generational tool. For example, Turkey is moving away from an education system based on secular studies and forcing students to learn the Koran and Islamic teachings.


"Education is an ideological tool," said Sakine Esen Yilmaz, secretary-general of the left-leaning Education and Science Laborers' Union. "It is (now) being used to raise an obedient generation that will serve the government."

The Education and Science Laborers' Union is Turkey's largest trade union. They know what they're doing - creating good like Muslims who will not question the government no matter what it does.

Sound familiar? Just like America's National Education Association. For the record the NEA is the largest union in America. The American Federation of Teachers is smaller, but just as radical, perhaps even more so. Both unions are major supporters for the corrupt ACORN organization and spend $millions of its members' dues supporting left wing politicians and liberal causes. Both unions are rife with corruption and have had local leaders arrested for embezzlement.


Fortune magazine has consistently ranked the National Education Association in the top 15 of its Washington Power 25 list for influence in the nation’s capital.

Over the last 20 years, the American Federation of Teachers (AFT) has given more than $28 million in campaign contributions; the National Education Association (NEA) has given almost $31 million. That's almost $60 million, more than any other organization — but that's just the tip of the iceberg. At the state level, the AFT and NEA combined to spend an additional $61.8 million on candidates and expenditures for ballot initiatives in 2008 alone. Plus, teachers unions spend millions more on uncoordinated expenditures and get-out-the-vote efforts.

According to The Heritage Foundation, through July 2010, unions spent almost three times as much money on campaign ads as all corporations combined. 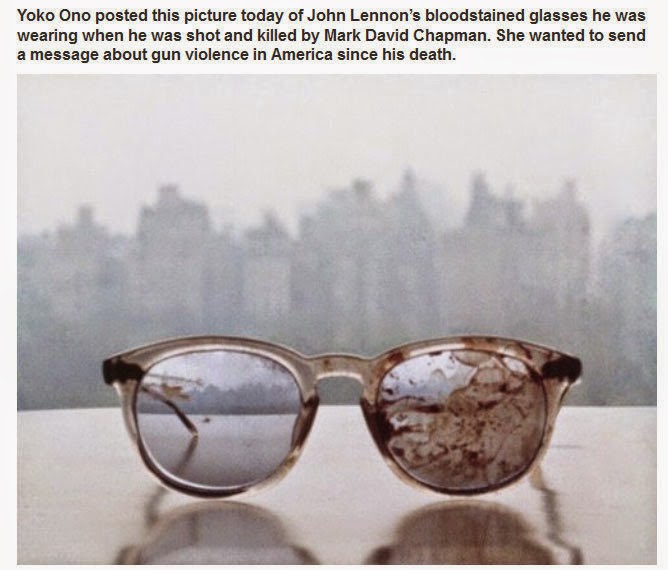 John Lennon is dead, killed almost thirty-five years ago by a mentally unbalanced man who to this day is incarcerated. He will most likely remain so for the rest of his life. He is here at the Wende Correctional Facility in Alden, NY, about eight miles east of Buffalo.

I can understand Ms. Ono's preoccupation with gun violence. But it is on the wan in the US since her husband was killed. If she is so concerned about the death of innocents, perhaps she should change her focus.

Today the threat world-wide is different. Thousands and thousands of people have died at the hands of Muslim terrorists. This murder and mayhem continues unabated throughout the Middle East and we are witnessing the spread of this madness to our own shores in the form of honor killings.

I will not reproduce the bloody Muslim terror images that assault our senses daily, they are far more disturbing than a pair of hippy glasses smeared with blood. Yet liberals refuse to acknowledge the true dangers of our world for we are under attack by an irrational religion, a mentally and morally unbalanced system of worship that glorifies horrific murder in the name of a demon moon god and his deranged prophet.

But getting back to Yoko and her spattered eye wear cry for gun control:
What has happened to the murder rate for Islamic terrorists over the last thirty-five years? Anyone want to hazard a guess? Are they all nut cases like Chapman? Studies indicate otherwise.

Enough said, but there's an interesting study from the Bureau of Justice Assistance on homicide trends in the US available here for viewing. Here is a sample.

This goes back to parenting or the lack thereof inherent in a welfare state.
Posted by sig94 at 11:14 AM 4 comments:

Little League International has stripped an all black baseball team of its championship after verifying allegations of cheating.

The team, Jackie Robinson West, is from Chicago. 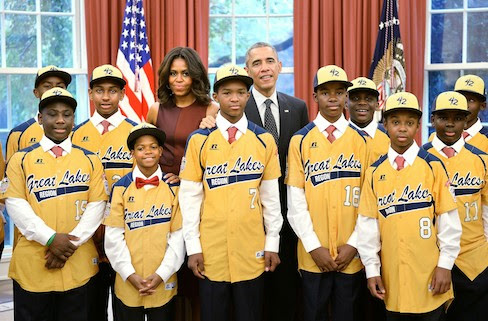 First it was diary products - fat was bad, low fat was good, no fat even better:


"And they shall take up skim milk, and if they drink any lo-cal, it shall not hurt them"

And we obeyed. We bought millions, billions of gallons of water masquerading as chalk. We slathered metric tons of hydrogenated vegetable oil on our bleached flour toast and choked down oceans of egg whites violently separated from their loving, grieving yolks. Now we find this:


Guidelines that told millions of people to avoid butter and full-fat milk should never have been introduced, say experts.

The startling assertion challenges advice that has been followed by the medical profession for 30 years.

The experts say the advice from 1983, aimed at reducing deaths from heart disease, lacked any solid trial evidence to back it up.

And not only fat, cholesterol will soon be removed from the list of hazardous nuclear compounds.

Science is reeling.
Scientists taking hits off the Relativity bong and playing spin the neutron.
Scientists flinging open their lab coats and flashing their pocket calculators.
Scientists revving the Hadron Collider to nearly the speed of light, popping the clutch and putting down a thick, steaming patch of Boson Higgs particles.

What else??? The Big Bang Theory has now been relegated to stories of Mary Ann in the back seat of your father's 1973 Chevy Vega.

Our universe, according to Einstein's theories, is around 13.8 billion years old and formed from an infinitely small point during the Big Bang.

While most people accept this model, scientists still can't explain what happened inside this tiny point - called a singularity – or what came before it.

Now, two physicists have put forward a radical new model which suggests the Big Bang didn't take place - and that our universe has no beginning and no end.

[...]'As far as we can see, since different points in the universe never actually converged in the past, it did not have a beginning,' said Professor Das.

'It lasted forever. It will also not have an end…In other words, there is no singularity.'
But if there was no Big Bang, what is the history of our universe?

'The universe could have lasted forever,' speculates Professor Das.

'It could have gone through cycles of being small and big.

This has been christened The Viagra Theory of Universal Contraction and Expansion
Posted by sig94 at 7:31 PM 4 comments:

Shut Up, Go Away

They need to invent a pill and use mouth restraints on this idiot.


In the midst of a career spent covering and consuming news, it has become painfully apparent to me that I am presently too much a part of the news, due to my actions.

As Managing Editor of NBC Nightly News, I have decided to take myself off of my daily broadcast for the next several days, and Lester Holt has kindly agreed to sit in for me to allow us to adequately deal with this issue. Upon my return, I will continue my career-long effort to be worthy of the trust of those who place their trust in us.