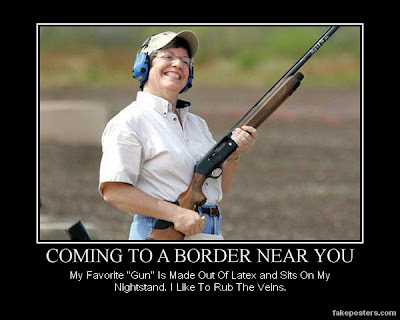 At first I thought this was a joke. But then I remembered:


This ain't Sparta.
This is Homeland Security.
From Fox News:


Border Patrol agents in Arizona are blasting their bosses for telling them, along with all other Department of Homeland Security employees, to run and hide if they encounter an "active shooter."

It's one thing to tell civilian employees to cower under a desk if a gunman starts spraying fire in a confined area, say members of Tucson Local 2544/National Border Patrol Council, but to give armed law enforcement professionals the same advice is downright insulting. The instructions from DHS come in the form of pamphlets and a mandatory computer tutorial.

And don't forget the moist towelettes and chocolates.


“We are now taught in an ‘Active Shooter’ course that if we encounter a shooter in a public place we are to ‘run away’ and ‘hide’" union leader Brandon Judd wrote on the website of 3,300-member union local. “If we are cornered by such a shooter we are to (only as a last resort) become ‘aggressive’ and ‘throw things’ at him or her. We are then advised to ‘call law enforcement’ and wait for their arrival (presumably, while more innocent victims are slaughtered)."

No matter where or how you serve, the ROE will all be the same under Obama and his minions. I was also taught to throw things, like 230 gm hollow points. I still do a pretty good job of it.


The FEMA-administered computer course, entitled “IS-907- Active Shooter: What You Can Do,” is a 45-minute tutorial that provides guidance to all employees on how to recognize indicators of possible workplace violence and what to do should their office be invaded by gunmen and focuses around three main options; either evacuate, hide out, or in dire circumstances, take action.

The motto of the US Border patrol is "Honor First." You really have to pity these poor devils. Next thing DHS will order them to don blue nitrile gloves and grope someone's crotch while they're being shot at. 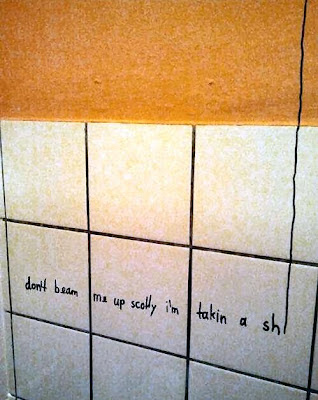 It's Been Quite A Day 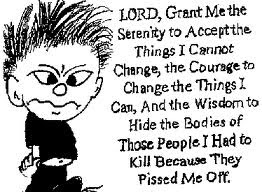 Earlier this morning the US Supreme Court today declared that the legislative mandate that requires everyone to have health insurance is unconstitutional but that that a healthcare tax that provides the same thing is hunky dory.

This afternoon the US House of Pain Representatives voted for the first time ever to impeach a standing US Attorney General.

Between running guns south of the border so millions of Mexican citizens are terrorized and hundreds murdered, promising free health care to every Tom, Dick and Harry, and then granting amnesty to 800,000 illegals, it appears Obama is trying to pressure the whole damn country to move north to America.

I'm exhausted, I don't know exactly how pissed off I should be.
BigFurHat has something to say that makes sense:


Reading some of the reactions from commenters around the blogosphere it is dawning on me that many people were waiting on a ruling from SCOTUS to decide on whether the apparatus of Obamacare – death panels, rationing, doctor choice, patient’s choices – were constitutional or not.

This was never the issue. These aspects of Obamacare are a DONE DEAL. It always was. That was never in question. The decision was whether they could force people into buying health insurance that would be subjected to the Obamacare apparatus or not.

SCOTUS was never going to say, “see these death panels? Unconstitutional.” It’s not what was before them.

The only thing they were asked was whether you can force someone into buying health insurance. They said, “no.”

They did, however, remind the government that it is perfectly legal to tax people. So that is exactly what they are going to do.

To all the people creating scenarios like, “what’s next, is the government going to force us to buy a smart car or be taxed for not doing so?”, I’d like to remind you that you are already being forced into buying Smart cars. you might not be behind the wheel of one, but you paid for it.

You BUY all sorts of government products that you would never willingly purchase, the purchase is hidden amongst the entirety of your yearly tax bill.

If it makes you feel any better, think of Obamacare as a $500 Pentagon hammer.

A Special Place In Hell 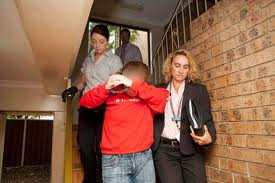 There are a number of offenses for which God, in His Infinite Wisdom, has established a special place in Hell. These are the places where it is hotter, darker and more isolated. The rocks are sharper, the sand drier and Eternity is longer.

Child prostitution is one of those crimes.


FBI rescues 79 child sex slaves in massive three-day prostitution sweep across the US
The FBI has rescued 79 teens held against their will and forced into prostitution from hotels, truck stops and stores during a three-day swoop on sex-trafficking rings across the country

The sex slaves were aged between 13 and 17, although one said she had been involved in prostitution since she was just 11, authorities said.
During the sting operations across 57 U.S. cities - including Atlanta, Sacramento and Toledo, Ohio - 104 alleged pimps were arrested.

The Man Who Rode The Thunder

An amazing story. You have to consider God's grace when you hear about things like this.

"A well regulated Militia, being necessary to the security of a free State, the right of the people to keep and bear arms, shall not be infringed." (Second Amendment to the Constitution.)

From the Examiner:
A report issued by the State Council Information Office of the People's Republic of China has included U.S. gun ownership among a list of human rights violations, Law Enforcement Examiner Jim Kopuri reported yesterday.
"The Human Rights Record of the United States in 2011" was published last Friday on the PRC’s Consulate General in New York website.


“The United States prioritizes the right to keep and bear arms over the protection of citizens' lives and personal security and exercises lax firearm possession control, causing rampant gun ownership,” the report claims. “The U.S. people hold between 35 percent and 50 percent of the world' s civilian-owned guns, with every 100 people having 90 guns [and] 47 percent of American adults reported that they had a gun.” 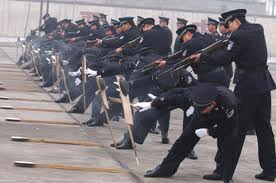 We have some opinions about that:

"To preserve liberty, it is essential that the whole body of the people always possess arms, and be taught alike, especially when young, how to use them."
~ Richard Henry Lee, Virginia delegate to the Continental Congress, initiator of the Declaration of Independence, and member of the first Senate, which passed the Bill of Rights.

"The great object is that every man be armed . . . Everyone who is able may have a gun."
~ Patrick Henry, in the Virginia Convention on the ratification of the Constitution. 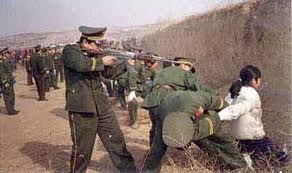 MAKES PERFECT
Chinese Style
"The advantage of being armed . . . the Americans possess over the people of all other nations . . . Notwithstanding the military establishments in the several Kingdoms of Europe, which are carried as far as the public resources will bear, the governments are afraid to trust the people with arms."
~ James Madison, author of the Bill of Rights, in his Federalist Paper No. 46. 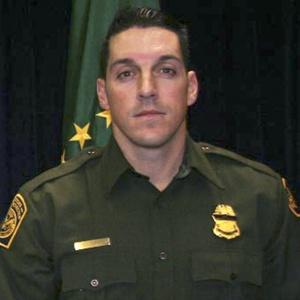 Border Patrol Agent Brian Terry
Murdered by Fast and Furious
This NY Post  opinion piece is probably the best summation of the "Fast and Furious" debacle currently unfolding across America .... except, of course, in the liberal media where it does not report but instead COATs  (Covers for Obama All the Time) the subject. 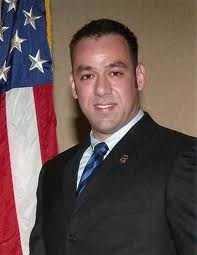 Obama and Holder desperately need to be imprisoned and the ATF needs to be disbanded. 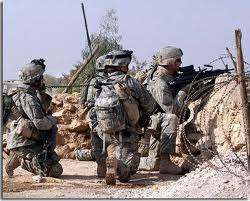 The Pathway to Hell is paved with good intentions. I don't know if this is a good idea or not. From Military.com:

WASHINGTON -- A Pentagon review recommends ridding the combat pay system of inequities that have allowed officers thousands of miles from battle to get better benefits proportionally than troops on the front lines in Afghanistan.

The recommendations in a review released Thursday are likely to anger servicemembers. But the director of the review said they're aimed at paying more to troops who are in the gravest danger and giving the best tax benefits to those who are paid the least.

If it's from Obama's generals I tend to distrust it. Half the time I think they are more interested in protecting their own rice bowls rather than the lives of the people entrusted to their command.

Can this evolve into a "I'm Gay, More Pay" scenario because my straight platoon members threatened to kill me if I strut my stuff in the showers one more time?

Under the military's current system, there are two types of combat pay. One, called "hostile fire pay," gives troops $225 a month if they are in an area where they could be exposed to enemy fire.

The second, called "imminent danger pay," gives up to $225 per month to those who are in a combat zone, and it is pro-rated at $7.50 a day, based on how long they are there.

Since the Secretary of DHS views veterans and conservatives as the enemy, will liberal servemembers residing near VA hospitals or in predominantly Republican counties be eligible for eminent danger pay? How about Tea Party demonstrations?


The panel was struck by that disparity, Bush said, adding that a senior officer could get as much as a $15,000 tax benefit, while an Army private might get a $1,000 tax benefit.

And yet, the private serving at a combat outpost in Kandahar or Khost in Afghanistan has a much higher chance of getting killed or injured than a senior officer serving in a headquarters unit or in Bahrain.

Congress members have been loath to do anything that appears to cut combat pay and have often tried to increase pay raises for the military. Bush acknowledged that it's not clear how open they would be to the changes recommended by the report, but he said he hoped lawmakers would be open to making the system more equal.

Ridiculous hypotheses aside, one of the reasons my daughter is looking forward to another deployment early next year is because of the combat pay. Even if this commission does its job properly, that doesn't mean it will automatically translate into policy that actually benefits those soldiers who march into Harm's Way. We'll see.
Posted by sig94 at 8:02 AM 6 comments: