Future of the News
By Jeffrey Folks

It's a frightening thought: government takeover of the media. But having tightened their grip on health care, financial services, and energy, it's only logical that the Democrats should turn their attention to the media.

Discussions underway at the Federal Trade Commission and the Federal Communications Commission point toward a dangerous new effort to regulate what Americans read and hear. The takeover under discussion would apply across the board to print media, radio and television, and the internet. The result of proposed regulations would be nothing less than an end to free speech in America.

Under the proposed changes, government would have the right to impose taxes on selected media (including internet service providers and internet sites) and redistribute funds to traditional liberal news media. Government could impose a fairness doctrine on the internet as well as on radio -- thus forcing conservative media to "balance" their programming by including liberal commentary.

Government would also be granted a wide range of options for subsidizing liberal media, including perpetual grants of taxpayer money to left-leaning publications like the New York Times and to increase funding for "progressive" media such as National Public Radio and the Public Broadcasting System. No wonder the Nation magazine has lavished praise on the FTC and FCC proposals: Based on its longstanding liberal bias, the Nation might qualify for a generous handout.

In its recently published "staff discussion," the FTC maintains that big-city newspapers and other traditional media (such as old-line network television) have seen their revenues declining and that, as a result, there have been "significant losses of news coverage." Since news coverage serves a "public good," it is up to the government to perpetuate these traditional media.

Nowhere in its extensive discussion does the FTC consider the possibility that old-line media are failing because they are simply out of touch with the American people. The mainstream television news outlets are clinging to a liberal ideology that is as irrelevant as Lyndon Baines Johnson, but they refuse to change. Who wants to hear Brian Williams's endless reports on "Making a Difference" when those reports routinely bash capitalism in favor of community organizing? Who wants to listen to more of the media's underhanded propaganda pieces carefully timed to support "progressive" legislation like Obamacare and cap and trade? Who wants to watch their biased exposés taking on religious leaders, big business, and the American military?

The FTC seems to believe that serious news reporting cannot exist without government subsidies. Why is it that Fox News and the Wall Street Journal have flourished while traditional networks and the New York Times have fallen off a cliff? Fox News and the Journal are doing just fine -- as are thousands of conservative websites and radio stations -- without government intervention. Government's contention that news reporting is in decline is simply preposterous: Americans are more engaged and better-informed than ever before. Perhaps that is what worries Obama's regulators.

Now Obama is out to force the public to listen to outfits like MSNBC, whether they want to or not. The FTC and FCC proposals are convoluted and numerous, but the net effect is to subsidize liberal news while taxing and restricting conservative media. This dangerous censorship is disguised as a well-intentioned program to "save the news." In fact, it is little different from the sort of limitation of free speech that is practiced in every totalitarian dictatorship.

I report; you decide

Megyn Kendall (that's how she's still known to me) has a discussion, er shall we say, escorts K. Powers to the woodshed:

Get out the vote in November... and don't forget to stay angry

"There are, besides, eternal truths, such as Freedom, Justice, etc. that are common to all states of society. But Communism abolishes eternal truths, it abolishes all religion, and all morality, instead of constituting them on a new basis; it therefore acts in contradiction to all past historical experience."

If you want to toss a couple
of bucks to her campaign, click on
DUMP HARRY.
Posted by Anonymous at 3:21 AM 4 comments:

It's Hard to Make Soccer Uglier and More Boring than it is, but ...

You have to hand it to the Dutch. They did it. Thank God the spectacle is over.

With the Netherlands' loss in the World Cup Final, Van Gogh's paintings and the invention of the wooden shoe still rank as the twin towers of Dutch achievement.

At least with Spain's win we are spared celebrations like this:

Thank you, Spain.
Posted by Anonymous at 1:22 AM 9 comments:

"They were simply parasites, less useful to society than his fleas are to a dog...Clearly there was only one escape for them - into stupidity...It is important not to misunderstand their motives, or one cannot predict their actions....What is to be expected of them is..stupidity, unconscious sabotage, an infallible instinct for doing the wrong thing...Only when their money and power are gone will the younger among them begin to grasp what century they are living in." 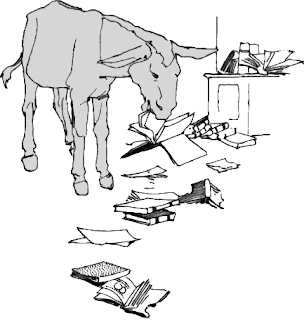 Last week Barack Obama said that some Israelis are "suspicious" of him, because his middle name is "Hussein".

He said this with a straight face. It's a Jewish variation of Obama's Bitter Clinger axiom, but not an unusual construction for Obama (He "thinks" this way automatically) as do all leftists and most liberals.

For that matter, most of us do, to some extent. It's a valid and essential way to reduce and classify our own and someone else's assumptions and beliefs - contextualize them, to evaluate the influence of the "context" in which they're made.

The context, however, should never establish itself as the argument in the mind of the investigator...which it does to a shocking degree in the presumably well-educated brain of Barack Obama. The assumption that in the context of an embattled Israel, any or even a significant number of Israelis, are suspicious of the self-dignifying Obama because of his middle name is so - stupid - in so many ways, that it can't be ignored.

First,the claim is impossible to prove or disprove, and an expansive mind would reject it, off the bat, as incredible . Second - and not surprisingly - it portrays Obama as the honest, correct, post facto injured party in his Israeli policies, and Israeli opposition to them as simple-minded. Third, it's cruel, arrogant and clever, in the "do you still beat your wife" fashion. It exposes some of the poison in Obama's heart toward Jews and Israel, his inability to contain it, and the lengths to which "educated" liberals will go to avoid considering opposing arguments.

Contextualizing opposition to himself as the act of stupid, name-reactive Jews is happening here, but also in every other pre-judged social group (Racist Tea Partiers, bitter clingers, non-union members, xenophobic Southwesterners, health-care hating Republicans) contextualizing is the means of condemnation. It's more delicate than outright stereotyping because it's very surgical.

Obama is "bright" in the facile, glib, phony erudite style so important to liberals - that is, in the ways liberals recognize each other in crowds, mate-select and differentiate themselves from mere homo sapiens, but he is neither smart, learned nor honest. He never seems to have analyzed any of the liberal swill pumped into his head by family or mentors, except in his anticipation of objections to it. Obama is only "bright" like a male cardinal, or bright in the John Kerry fashion: how to sound like an intellectual with the brain power of an eggplant.

Kerry was a great contextualizer, too. Like Obama, his meager but vile intellect would establish the context of an opinion, belief or human pattern as the basis for its validity, and all Big Lies depend upon this scheme. This line of thinking isn't so much deduced from statist ideologies as it is impossible under any other kind of of ideology. When honesty, efficiency, justice, liberty, law and truth have to be dumped to establish authority and hold political power, they're drawing up plans for an authoritarian madhouse, with you as a permanent inmate.

I don't plan to show up and neither should you. Whom the gods would destroy, they first make stupid.
Posted by Rhod at 12:54 PM 15 comments: