Just WTH Is It With Feds And Guns?

Just WTH is it with Feds and guns? If this isn't a love/hate relationship I don't know what is. First they try to take them away from law abiding citizens but can't wait to get their hands on them for themselves.

EXCLUSIVE: The director of the Federal Air Marshal Service is retiring after being investigated for his role in an alleged operation to acquire guns for officials' personal use, FoxNews.com has learned.

Director Robert Bray's home was raided in December in connection with the ongoing probe, according to sources and documents. Law enforcement and congressional sources told FoxNews.com that Bray's recently announced retirement, which is effective in June, is directly related to the investigation.

Transportation Security Administration officials say no such raid ever happened.

But Bray allegedly is among several officials who were obtaining weapons through this operation.

The probe stems from whistleblower accusations involving federal Air Marshal supervisor Danny Poulos. Sources say the Department of Homeland Security inspector general is involved, and possibly the Bureau of Alcohol, Tobacco, Firearms and Explosives. TSA officials disputed that those agencies are involved, but acknowledged that there is an internal review underway by the TSA Office of Inspection into the supervisor's alleged activity.

The supervisor, a TSA official confirmed to FoxNews.com, is "on administrative leave."

Poulos is accused of using the agency's federal firearms license and his relationship with gun manufacturer Sig Sauer to obtain discounted and free guns. He then provided them to high-up agency officials for their personal use, according to whistleblower documents obtained by FoxNews.com and interviews with multiple officials with knowledge of the ongoing probe.

There's big bucks involved in equipping an agency with handguns. These weapons are not cheap.


The Air Marshal Service, as part of their expansion following the 9/11 terror attacks, adopted the SIG P229 handgun and has used the system across its ranks, which swelled to nearly 5,000 agents. Bray accepted the position of director of the agency in 2008. The following year the AMS announced a switch to the SIG P250 despite the fact that other federal law enforcement agencies rejected the gun after it failed performance testing.

The P250 is a subcompact that may not meet rigid government requirements for any number of reasons. Sig makes a very decent, high quality handgun but that particular configuration may only be suitable for air marshals concealed carry. IMHO as an undercover or off-duty weapon, it would be ok, but that's just me. I carry a .357 or .45, nothing less.

Tony and Heather Podesta have called it quits. Once Washington DC's quintessential couple, their divorce proceedings have opened up a rare glimpse into the underpinnings of power at the highest levels of government.

This Washington Free Beacon posts the claims and counter-claims filed by the Podestas. These documents

tell stories not only of a May-December romance gone sour, but of how obscene wealth can be amassed through rent-seeking and influence-peddling in Washington D.C., and of the hoary means by which the princelings of the capital and their consorts maintain and grow that wealth. They tell stories not only of an ugly divorce, but of the power of lobbying, of how one family maneuvered to the center of the nation’s dominant political party, of the transactional relationships, gargantuan self-regard, and empty posturing that insulates, asbestos-like, the D.C. bubble.

That the broken couple now uses the tools of their trade—the phone-call to a friend, the selective leaking of documents, the hiring of attorneys, the launch of a public-relations campaign—against one another is more than ironic. It is fitting. Tony and Heather Podesta reached the pinnacle of wealth and influence in Barack Obama’s Washington. Now they, like he, are in eclipse.

Ultimately it's all about the dollar. Those who seek to enslave us also offer for sale the key to remove some of the chains ... at a price.

As government expands, extending its reach to every aspect of business, every sector of the economy, private citizens and corporations require sherpas to lead them through the mountains of regulations and tax provisions, to discover exemptions and special favors and other forms of relief or favoritism to improve the bottom line. And who better to act as sherpas than the relatives of the Democrats who impose the regulations and tax provisions in the first place, who better than the lively proprietors of a family business operating in the luxurious and morally uncomplicated world of the caste of limousine liberals who dominate politics, culture, news, and finance.

This post was written under the Pale Moon browser.
Posted by sig94 at 4:21 PM 2 comments: 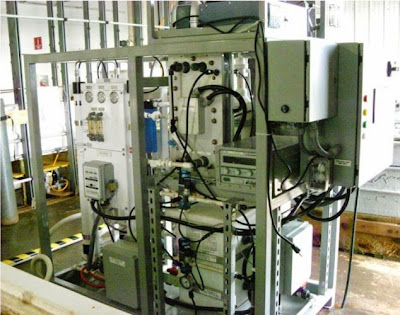 
I really want to see what effect this has at the pumps. Then again, if the politicians have their way and get lubed up by the big oil companies, nothing much may change.
From the UK Daily Mail:


The US Navy has developed a radical new fuel made from seawater.

They say it could change the way we produce fuel - and allow warships to stay at sea for years at a time.
Navy scientists have spent several years developing the process to take seawater and use it as fuel, and have now used the 'game changing' fuel to power a radio controlled plane in the first test.

The development of a liquid hydrocarbon fuel is being hailed as 'a game-changer' because it would allow warships to remain at sea for far longer.

The US has a fleet of 15 military oil tankers, and only aircraft carriers and some submarines are equipped with nuclear propulsion.

All other vessels must frequently abandon their mission for a few hours to navigate in parallel with the tanker, a delicate operation, especially in bad weather.

The ultimate goal is to eventually get away from the dependence on oil altogether, which would also mean the navy is no longer hostage to potential shortages of oil or fluctuations in its cost.

The predicted cost of jet fuel using these technologies is in the range of $3-$6 per gallon, and with sufficient funding and partnerships, this approach could be commercially viable within the next seven to ten years.

Our daughter was one of the fastest kids in school, she still holds the girls' middle school record in the hurdles. Unfortunately this has cost her. She has been complaining for some time about her hips "snapping" and aching; after several tests we found out that due to a congenital condition, she will need to have both her hips replaced. It doesn't need to be done right away, but the discomfort is mounting.

Annnnnnd guess who her surgeon is...


SYRACUSE, N.Y. - Federal investigators say a Syracuse surgeon often slapped anesthetized patients on the buttocks and insulted them before surgery.

The Syracuse Post-Standard reports that the federal Center for Medicare and Medicaid Services found that the doctor slapped patients so hard he sometimes left red marks or hand prints.

St. Joseph's Hospital Health Center faces sanctions over the issue, including a possible termination from the Medicare and Medicaid programs.

A complaint filed in January with the state Health Department identifies the doctor as Michael Clarke, an orthopedic surgeon specializing in hip replacement. The state health department's findings are the basis of the federal report.

From what I have been able to gather about this man, as a surgeon there is none better; as a human being there are few worse. It is his conduct, not his competence, that is in question.

Still, we are considering the services of some other surgeon. And perhaps another hospital also since the one he was in appears to have been more interested in the lucrative hip surgery field than in patient dignity and safety. For a typical hip or knee replacement surgery where the patient is in the hospital for two and a half days, the bill is over $26,000. Many of these patients are on Medicare which is how the feds got wind of this. 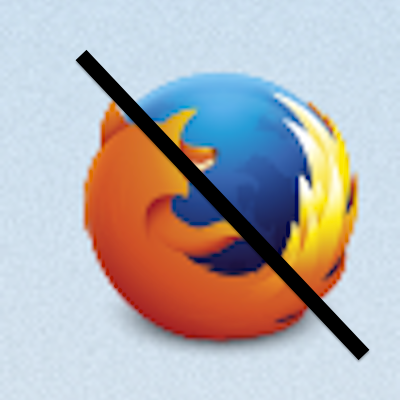 The gay nazis are on a roll, or so it seems. Never heard of this guy Eich and with his abilities I imagine he won't be out of a good paying job for too long.

Anyway, I deleted Firefox as a browser and using Safari after getting sick and tired of IE crashing on me.

Thanks Odie for letting me steal your "No Firefox" image.
Safari will take some getting used to...

Mens rea is Latin for "guilty mind". In criminal law, it is known as a culpable mental state. This is the knowledge or intent that the act committed would be a crime. For obvious reasons children are not held to the same standard of conduct as adults; except in some countries apparently.

There is only one way to top this surreal piece of Pakistani juris prudence, in utero arraignments.

Lahore (Pakistan) (AFP) - While many children his age are still learning how to crawl, a nine-month-old boy in Pakistan has been accused of attempted murder in a case observers say highlights endemic flaws in the country's legal system.

Baby Mohammad Musa along with his father and other family members was booked for throwing rocks at gas company officials in the working-class Ahata Thanedaran neighbourhood on February 1, the family's lawyer Chaudhry Irfan Sadiq told AFP Friday.

Inspector Kashif Muhammad, who attended the alleged crime scene and has since been suspended, wrote in his report that it was a case of attempted murder.

Appearing in a packed court room with others accused in the case on Thursday, Musa was seen crying as his grandfather Muhammad Yasin held him on his shoulder.

Yasin later fed him milk from a bottle while fielding questions from reporters.

"Everyone in the court was saying 'How can such a small child be implicated in any case'? What kind of police do we have?" the 50-year-old labourer said.


The is the kind of police you have when your nation has embraced the demonic utterances of a child molester for religious and moral standards. At least he won't be executed until he is weaned from the bottle.

More of the story here.