Back In My Ams Again

Email ThisBlogThis!Share to TwitterShare to FacebookShare to Pinterest
Labels: music, The Supremes

I Want You To Want Me

I Hate Myself For Loving You

Email ThisBlogThis!Share to TwitterShare to FacebookShare to Pinterest
Labels: music, The Turtles

From the Conservative Tribune:


In the hours after a deranged man killed nine people and injured others at Oregon’s Umpqua Community College, a vast segment of the mainstream media immediately attacked guns, Republicans, conservatives and the National Rifle Association.

As usual, President Barack Obama danced on the graves of the deceased in an attempt to push his gun control agenda, just like he’s done after every mass shooting. It was truly a disgusting display.

Conservative Hollywood actor James Woods pointed out another interesting media omission that should be at the forefront of the story — the fact that the media forgot to emphasize that the shooter asked nearly every victim what religion they were. According to eyewitness reports, answering “Christian” was a death sentence.

Woods took to his Twitter account not long after the shooting and made a prediction that ended up being a massive truth bomb. “If it is determined that the Oregon shooter targeted Christians specifically, that’s the last we will hear of it on MSM,” Woods wrote.

The next day, he was proven right, when he called out The New York Times for leaving out the part about Christians dying.

Not long after witnesses described the chilling motive of the shooter, all but a few mainstream outlets reported every tiny detail about the shooting that they knew of … except for the whole Christian part.

One only has to look at a recent mass shooting case to see the media’s true motivation. Within hours after the Charleston, South Carolina, church shooting, the white killer was immediately linked to the KKK and other hate groups. It was the first part of most of the headlines over the following days and weeks.

And let’s be completely honest, if the killer were white and specifically targeted Muslims or other “protected” religions and ethnicities, we wouldn’t hear the end of it. 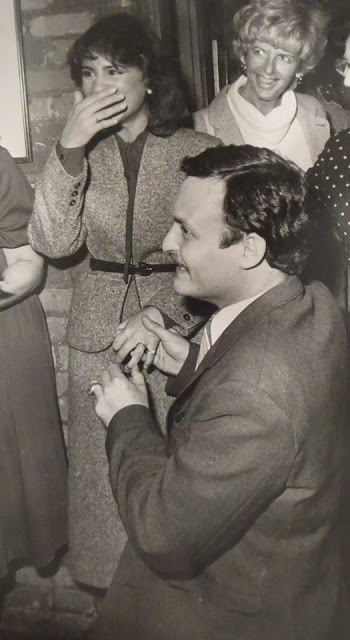 On Oct.4th 1981 (34 years ago) Jim got on his knee and officially asked me to marry him!! It was at an anniversary party for the Sterio's Landmark Restaurant downtown. He did this in front of many people including my parents and friends!! Do I look happy or what??!!

Email ThisBlogThis!Share to TwitterShare to FacebookShare to Pinterest
Labels: music, The Box Tops

Clean Up, Throw Out

Got back early from LI. Two days of loading a rental truck in a downpour was fun. My mom is a pack rat. We couldn't believe all the boxes and cans and packages and bags and containers and plastic bins she had. We donated loads and loads of stuff  to good will type organizations and just as much to the dumpster. We cleaned the condo real good and hope to close by the end of the year. One good thing, there were two potential buyers and they bid the price up over what we had the property listed for. Mom will get an additional ten grand.

My sister and her husband took what we could fit on the truck back to Maryland. Mom is in an efficiency apartment at the assisted living center and there is no way that all this crap will fit. My sister will have to store a lot of this in her garage. My BIL and I are both in our late sixties. Clearing out the contents of an apartment was no picnic. We both agreed that a career change into the exciting moving industry business was out of the question. I loaded up on Aleve™ in memory of the trip.

My wife and I are now filled with motivation to get rid of all the useless crap we have. No way we want to saddle our kids with that when the time comes.

I started to clean out years ago but I got to get back into it. A few garage sales helped but they weren't enough.  A few bags at a time for the refuse pickup will certainly help. I 'll need a hand for the old construction materials. - got probably at least a half ton of cast iron baseboard heaters in the basement that I can get a few bucks for at the salvage yard. I have at least twenty of these four foot hot water heaters that go fifty pounds a piece if they weigh an ounce. I took them out when I refinished the first basement and was going to use them in the second basement - the house is built into the side of a hill, it looks like a one story ranch in the front and is three and a half stories tall in the back. Ergo, two basements. Full of crap.

We leave on another trip on Thursday, this time to southern Maryland. The hurricane should be well out of the picture by then so maybe we'll see sunny skies on the way. I haven't seen Mom since February so we'll have a nice visit. One of my nieces is also driving down from Queens to see her Nana so that'll be a real treat also.

I was hoping my oldest daughter and her two daughters could make the trip also, but I just found out that one of her husband's oldest and closest friends is now missing. My SIL, my grandson and JR went hunting yesterday near Inlet, NY, and JR never returned to the truck when it started to get dark. The State Police are now involved; JR is in his fifties and I fear for the worst.
Posted by sig94 at 8:38 AM 2 comments: