Just How Big Is Our Deficit?

Just how big is a dollar?

A trillion is a million millions. A trillion one dollar bills would weigh over one million, one hundred thousand  tons (1,102,311 tons).

If you used it to cover Disney World in Florida it would look like this: 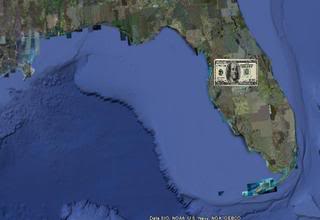 A one dollar bill the size of our national debt would be 159 miles wide and 374 miles long and would cover 59,637 square miles. It wouldweigh 15.5 million tons and look like this from outer space covering parts of five states: 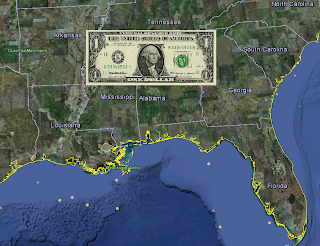 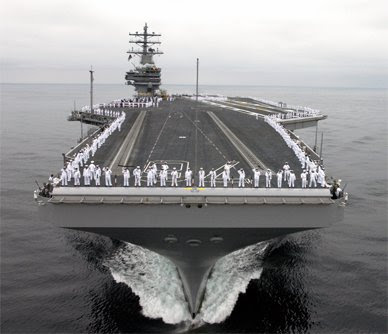 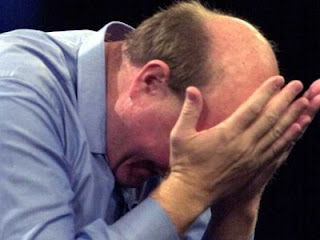 No matter where I turn, it all looks bad.

Under it's new and improved Sharia Law v AD 686.01.23 (yeah, right...), Libya will be lopping off heads and hands in no time flat. Time to invest in Islamic sword manufacturing. I tried looking them up via Google ...  they're all made in China. Bwaaahahahahaha!

Syria will probably be the next country to be invaded  by NATO. The new USAF song, "Off We Go Into A Wild Blue Clusterf**k." President Assad may take heed of Qaddafi's fate and become the next President-for-Life of Uganda. Life can be very good when you run the country like a news stand and you have a fast jet.

Obama's going balls-to-the-wall on his "Congress, Who Needs 'Em!" tour of the US. He will ram his new stimulus package disguised as a jobs bill down the throats of America like Rosie O'Donuts abusing Denny's all-you-can-eat bean burrito buffet. Obama leaks taxpayer money like a Louisiana dike hit by a six-year old with a sprinkler.

The entire European Union is a mess, a fiscal boil ready to pop. In order to remain solvent, Germany will have no choice but to invade Greece by way of France. In a severe cost control move, Italy's Prime Minister Berlusconi announced price controls on all hookers.

The 57 US States are now in the hole for a combined $4 trillion. Estimates on the extent that pension liabilities are responsible for this shortage range from $770 billion to $2.8 trillion. Speaking of unfunded public pension liabilities, the president of the SIEU has announced that it was a union negotiator attempting to gain access to Qaddafi's $200 billion who was responsible for the blunt object being forced up you-know-who's-you-know-what. Qaddafi wasn't swallowing any of it.

After swapping a kidnapped IDF soldier for 127,000 Hamas terrorists, Israel is now about to swap 25 Egyptian terrorists for one Israeli spy. In a related story, the Minnesota Vikings announced that defensive cornerback Chris Cook will be swapped for 9 future parolees from the state's maximum security facility.
Posted by sig94 at 8:33 PM 4 comments:

The Boy With The Golden Gun 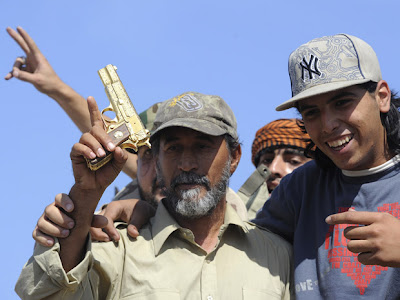 Recent revelations about Libya's newest frozen food entrée indicate that insanity may have been a contributing cause to Qaddafi's death. You have to be insane to have $200 billion stuffed in your mattress and still risk a sweet, sweet retirement party by scurrying  from one sandtrap to another chased by the Sharia mafia.  You end up getting capped by some kid with yellow teeth who just stole your gun.

Muammar Gaddafi secretly salted away more than $US200 billion ($A196 billion) in bank accounts, real estate and corporate investments around the world before he was killed, according to senior Libyan officials.

That's about $US30,000 for every Libyan citizen and double the amount that Western governments previously had suspected.

The new estimates of the deposed dictator's hidden cash, gold reserves and investments are "staggering", one person who has studied detailed records of the asset search said Friday.

If the values prove accurate, Gaddafi will go down in history as one of the most rapacious as well as one of the most bizarre world leaders, on a scale with the late Mobutu Sese Seko in the Democratic Republic of Congo or the late Ferdinand Marcos in the Philippines.

Revelation of the stunning size of the portfolio may stir anger among Libyans-about one-third of whom live in poverty.

The kid wearing the Yankees cap allegedly shot Muammar in the head.

Would you have stuck around Libya with that kind of money available to support you and your family in exile? I'd be on a beach somewhere looking at building a cabana half the size of the  island and ordering a few dozen thongs for my bodyguards. 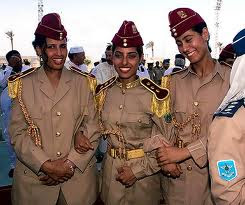 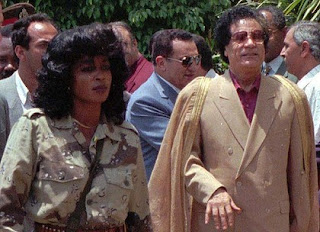 For a short time Qaddafi hired Michael Jackson as a bodyguard.
Posted by sig94 at 5:00 PM 12 comments: