Last week the coastal storm here in Connecticut matched the 24-hourly total of the Blizzard of 1888, (although not its total snowfall). For an old guy with a problem, I shoveled a lot of snow. Sig, especially, understands. Snowblowers are ineffective in high wind. Garden-tractor plows are useless in places with angles and grades. Shoveling is the only way, but you still have that big problem of great snowfalls: where to put the snow when you run out of places for it, and the snow mountains are so high, you can’t toss your shovel-full over the pile to the far side. 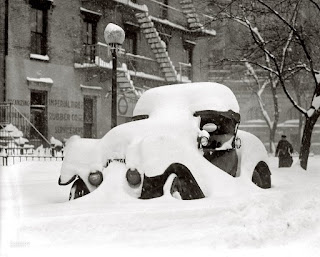 The best solution to this problem is to dispatch a little boy to the top of the mound (he's less apt to sink, than an adult) with his starter shovel and have him lower the summit by skimming and shovelling the snow to the far side.

Because chimney-sweeping with a kid on the end of a rope is illegal now, the only useful winter employment for a youngster is snow-removal. Sledding is unproductive, and teaches nothing.

The last time I had little boys to press into this arduous, but eduational, task, was during the ferocious winter of 93-94, and as adolescents in the raging winter of 96-97. By the time of the blizzards of 2006, they had left home, but I don't hold that against them. Now they're settled in life, and all of them are combat veterans.

I take responsibility for the last credential. Maybe I just pissed them off, or the snow shoveling hardened them for jumping out of airplanes, Rangering and SF-ing in Iraq and Afghanistan. You don’t have to thank me. They don’t; not yet. Blowing snow, steel-gray skies, and wind like razors is better than water and heat for tempering a boy. I only ordered them outside and gave them something to do.

Having no little boys now, I lowered the mounds myself, and went inside for coffee, to loop Collective Soul’s She Said, and to finish Paul Theroux’s ‘95 book "The Pillars of Hercules". Off the subject of snow for a moment, the book is about Theroux’s foot and boat journey around the Mediterranean from Gibraltar to Morocco.

Theroux is mildly liberal, but he’s no fantasist, especially about Europe, the ghastly Mediterreanean "states" and the decay of Middle East. He’s a realist, like we are at Nickie's. Today I feel really good, with an overdose of smug. When you do something hard and read something good; listen to good music, and miss your kids - and can tell someone about it - you love life and love America. God blessed America, and me. I hope your week was as good as mine.

Blog brother, Bungalow Bill, is in the news

Local blogger Clay Bowler said newly-elected 7th District Rep. Billy Long has tried to silence him before. And, after the FBI paid him a visit at his Ozark home Jan. 12, he thinks he’s trying to do it again.

“It’s political payback,” Bowler said after visiting Christian County Sheriff Joey Kyle Jan. 13 apprising him of the FBI investigation.
Bowler writes the Bungalow Bill’s Conservative Wisdom blog and said he’s been critical of Long since his candidacy for Congress. Bowler is also the author of the Long is Wrong blog that’s been gone since Long won the general election in November.

“I’ve poked fun at Billy,” Bowler said. “Part of it was satire—exposing Billy as not being a real Tea Party candidate.”
Bowler said Long even offered him a job on his campaign if he would give up his critical blogging.

Bowler was accompanied to the Sheriff’s Department by Michael Wardell, Nixa, who was also on the Republican primary ticket. Wardell said he just wanted to support his friend in what he believes to be intimidation.
(More...)
Posted by Anonymous at 10:55 AM 10 comments:

I need your advice!

Tibetan Monks from the Tibetan Gaden Shartse Monastery in India (they
are exiled from Tibet) work on a traditional sand painting called a sand
mandala at the Cozmic Cafe. The mandala is dedicated to Deity Manjushri,
the Buddha of Wisdom. The monks' visit raises funds for their monastery
foundation and, they hope, educates locals about Buddhist and Tibetan culture.
This evening, the lovely Mrs. Goomba notified me that she has invited these four Buddhist Monks to dinner next week. They are all carnivores, but the lovely Mrs. Goomba is a raw food vegan and atrocious cook. I have been assigned cooking duties. I need your help. What should I prepare for this international pow-wow?
This is not a joke. I need some sensible advice. Help!
Posted by Anonymous at 3:01 AM 23 comments:

All passengers departing for The Brave New World, please proceed to Platform 51.

YWCA drops the word
'Christian'
from its historic name
to call itself Platform 51
The Daily Mail
(London) One of the country’s best-known charities has changed its name, losing the clearest link to its Christian roots. The Young Women’s Christian Association has dropped its historic title after 156 years because ‘it no longer stands for who we are’.

Instead the organisation – which is mainly funded by legacies left by Christian supporters over 15 decades – will be known as ‘Platform 51’.

Bosses say the name was chosen to reflect the fact that 51 per cent of people are female and that they can use the charity as a platform ‘to have their say’ and ‘to move to the next stage of their lives’. The decision to drop all mention of Christianity from the charity’s name and purposes drew criticism from religious groups yesterday.

It also appeared to open a rift between the renamed grouping in England and Wales and the worldwide YWCA that grew after the charity was founded by two Englishwomen in 1855.
Officials at the World YWCA headquarters in Geneva said none of the 124 branches in other countries are changing their names.

Spokesman Sylvie Jacquat said: ‘The name has been there for more than 150 years and we are not even discussing a change. We see our name as an opportunity for promoting Christian values and principles.’
The YWCA is the latest in a series of charities that have tried to update their image, sometimes in the hope of getting more money from the Government.

The Socialists see the "wealthy" as enemies. They may want to rethink this.

"It is no surprise that America’s armed dissident movement has resurfaced. For a glimpse into this sub-culture, read Time Magazine’s “Locked and Loaded: The Secret World of Extreme Militias”. Time’s reporters went underground with the 300-strong `Ohio Defence Force’, an eclectic posse of citizens who spend weekends with M16 assault rifles and an M60 machine gun training to defend their constitutional rights by guerrilla warfare. As it happens, I spent some time with militia groups across the US at the tail end of the recession in the early 1990s. While the rallying cry then was gun control and encroachments on freedom, the movement was at root a primordial scream by blue-collar Americans left behind in the new global dispensation. That grievance is surely worse today."

Deepening crisis traps America's have-nots
(The Daily Telegraph) -
The US is drifting from a financial crisis to a deeper and more insidious social crisis. Self-congratulation by the US authorities that they have this time avoided a repeat of the 1930s is premature.

There is a telling detail in the US retail chain store data for December. Stephen Lewis from Monument Securities points out that luxury outlets saw an 8.1pc rise from a year ago, but discount stores catering to America’s poorer half rose just 1.2pc. Tiffany’s, Nordstrom, and Saks Fifth Avenue are booming. Sales of Cadillac cars have jumped 35pc, while Porsche’s US sales are up 29pc.Cartier and Louis Vuitton have helped boost the luxury goods stock index by almost 50pc since October. Yet Best Buy, Target, and Walmart have languished.

Such is the blighted fruit of Federal Reserve policy. The Fed no longer even denies that the purpose of its latest blast of bond purchases, or QE2, is to drive up Wall Street, perhaps because it has so signally failed to achieve its other purpose of driving down borrowing costs. Yet surely Ben Bernanke’s `trickle down’ strategy risks corroding America’s ethic of solidarity long before it does much to help America’s poor.

The retail data can be quirky but it fits in with everything else we know. The numbers of people on food stamps have reached 43.2m, an all time-high of 14pc of the population. Recipients receive debit cards – not stamps -- currently worth about $140 a month under President Obama’s stimulus package.

The US Conference of Mayors said visits to soup kitchens are up 24pc this year. There are 643,000 people needing shelter each night. Jobs data released on Friday was again shocking. The only the reason that headline unemployment fell from 9.7pc to 9.4pc was that so many people dropped out of the system altogether. The actual number of jobs contracted by 260,000 to 153,690,000. The “labour participation rate” for working-age men over 20 dropped to 73.6pc, the lowest the since the data series began in 1948. My guess is that this figure exceeds the average for the Great Depression (minus the cruellest year of 1932).

“Corporate America is in a V-shaped recovery,” said Robert Reich, a former labour secretary. “That’s great news for investors whose savings are mainly in stocks and bonds, and for executives and Wall Street traders. But most American workers are trapped in an L-shaped recovery.” 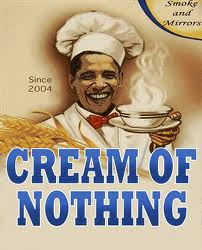 Of course it's because we're all racists.

White Flight
Previously unreleased results from the 2010 exit polls show a stark gap between whites and minorities and a smaller but still significant difference between blue- and white-collar whites.

President Obama’s path to a second term may rely on states shaped by the same social forces he embodies.

By any standard, white voters’ rejection of Democrats in November’s elections was daunting and even historic.

Fully 60 percent of whites nationwide backed Republican candidates for the House of Representatives; only 37 percent supported Democrats, according to the National Election Poll exit poll conducted by Edison Research. Not even in Republicans’ 1994 congressional landslide did they win that high a percentage of the white vote.

Until racism reared it's ugly head.

Moreover, those results may understate the extent of the white flight from the Democratic Party, according to a National Journal analysis of previously unpublished exit-poll data provided by Edison Research.

The new data show that white voters not only strongly preferred Republican House and Senate candidates but also registered deep disappointment with President Obama’s performance, hostility toward the cornerstones of the current Democratic agenda, and widespread skepticism about the expansive role for Washington embedded in the party’s priorities. On each of those questions, minority voters expressed almost exactly the opposite view from whites.