Dinner And A Show 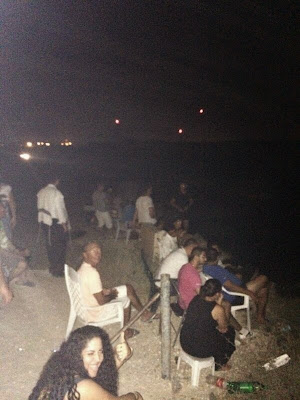 Sderot cinema. Israelis bringing chairs
2 hilltop in sderot 2 watch latest from
Gaza. Clapping when blasts are heard.
Seriously, I'd have my super comfy lawn lounger, a cooler full of my favorite beverages and a hibachi all fired up for this.


A photograph of Israeli residents of the town of Sderot leisurely watching the IDF’s aerial bombardments of the Gaza Strip went viral on social media over the weekend.

The picture, which was snapped by Danish journalist Allan Sorensen and subsequently posted on his Twitter feed, shows Israelis relaxing on lawn chairs while in the background lights emanate from the heavily bombarded Gaza Strip.

Jews emigrating from America to Israel are not bothered by the war like atmosphere they are entering. From the Jerusalem Post:


Jack Tobol said that the conflict was just another aspect to living in Israel and that it did not deter him.

He said that he had not thought about canceling his participation in Tuesday’s aliya flight due to the war.

“Part of the sacrifice of living here is understanding that the surrounding areas are hostile and that we don’t have peace and its just something we have to live with,” he said. “It’s not something that is giving me anything to think about or regrets.”

If You See It, You Can Hit It

From the Washington Times:


DARPA had a promising prototype for its Extreme Accuracy Tasked Ordinance (EXACTO) .50-caliber bullets in 2012, but the new video confirms that the agency has perfected the technology.

TrackingPoint Inc., the Texas company that specializes in creating precision guided firearms, has harnessed Google Glass technology to create a firearm that can hit targets that are behind corners. It’s called the the first precision-guided firearm (PGF).

“When paired with wearable technology, PGFs can provide unprecedented benefits to shooters, such as the ability to shoot around corners, from behind low walls, and from other positions that provide exceptional cover,” TrackingPoint claimed in a press release. “Without PGF technology, such positions would be extremely difficult, if not impossible, to fire from.”

At another demonstration this past January, the Department of Defense is testing another computerized targeting system for small arms.


While at the nation’s largest gun show in Las Vegas, Nev., the SHOT Show, the U.S. Army is said to have purchased six “smart” rifles after witnessing the product’s performance in the hands of novice shooters. Each rifle can cost up to $27,000, according to Military.com — but the rifle’s performance won them over.

[...] TrackingPoint Inc. Chief Executive Officer Jason Schaubie told the defense website that military snipers have a fire-shot success rate from that range of between 20 percent to 30 percent (which jumps to 70 percent on their second attempt).

“That is a better day than usual,” said Schaube. “I would say we’re at about 70 percent first-shot success probability at 1,000 yards … with inexperienced shooters.”

TrackingPoint ... you might want to buy stock in this company.

Email ThisBlogThis!Share to TwitterShare to FacebookShare to Pinterest
Labels: Firearms, Technology, US Military

For Every Seat, There's An Ass 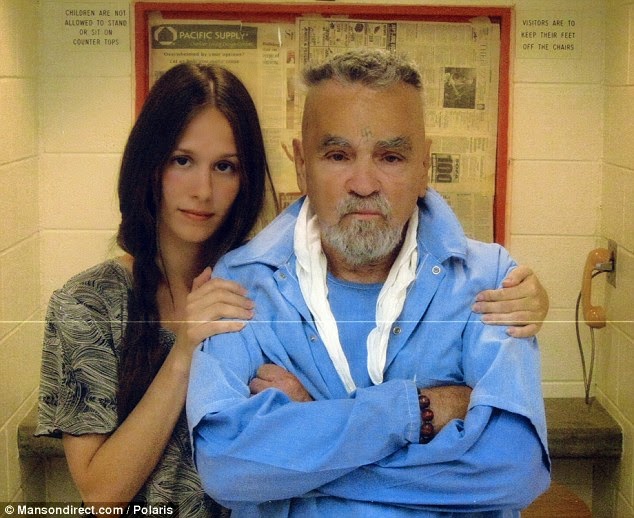 Charles Manson (aged 79)  is going to be married to a 26 yr. old psycho.
She is from Illinois so perhaps it does make sense, especially since Manson is a loon magnet.
Story here.

Israel Has Had Enough 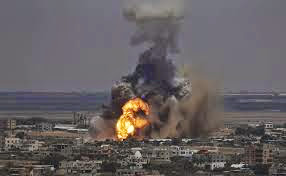 And how do you want your virgins, Achmed?


Israel has continued to launch rocket attacks on the Gaza Strip following days of violent exchanges -- and now leaders are signalling that the Israeli military reservists may need to prepare for a weeks-long ground invasion of the Hamas-controlled territory, officials said.

The Israeli military has announced that they have struck about 200 targets in the second day of their offensive.

Today's attacks came after a series of strikes against Israeli cities and the distance between the Gaza Strip and their northern-most Israeli target, near Haifa, suggests that Hamas is using longer range missile believed to have come from Syria.

But the israelis' are compassionate to a fault.
From the NY Post:

Israel has attacked more than 560 targets in Gaza during the past two days.

But in an effort to prevent civilian casualties, the Israeli military makes warning phone calls to militants’ homes, telling them to get out immediately because the building is going to be bombed. Warning leaflets are also dropped from the air before specific areas are attacked.

Rep. Steve Stockman (R-Texas) announced on Thursday that has filed a resolution directing the House sergeant-at-arms to “arrest Lois Lerner for contempt” over the.

Stockman said in a statement that asking the U.S.  to prosecute Lerner for “admittedly illegal activity” is a “joke.” Instead, the Republican said it is up to the U.S. House to “uphold the rule of law and hold accountable those who illegally targeted American citizens for simply having different ideas than the President.”

Under the proposed resolution, Lerner would be held in a Washington, D.C., jail and would be  to an attorney and all her constitutional rights.

“It’s time to for House to stop tacitly endorsing this administration’s illegal activity by refusing to hold him accountable,” Stockman said. “I expect Democrats to defend and even praise  activity. The question is whether Republican leadership will join them in mocking the House and breaking the law.”

Contempt of Congress is an actual  and the Supreme Court has previously upheld the right of Congress to hold people in contempt and even imprison them, the New York Times reported. 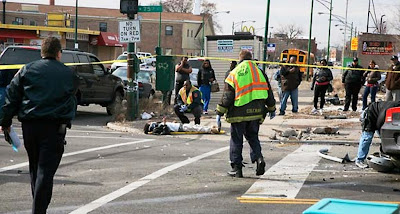 Apparently the democrats in Chicago are using the same tactics to reduce welfare payments that the Obama administration uses to reduce the cost of veterans' benefits.


CHICAGO - Police are dealing with the fallout from some unexpected fireworks over the past few days in Chicago. Eighty-two people were shot, 14 of them fatally, over the long Fourth of July weekend, according to the Chicago Tribune. The string of incidents kicked off in the afternoon on Thursday.

Obviously I was just kidding when I suggested that democrats want to reduce rampaging, out of control welfare costs or any other social spending programs. They'll blame this on global warming and demand that we all ride bicycles to work.

But, oh dear, it looks like that train has left the station. From Climate Depot:


Ecologist Dr. Patrick Moore, co-founder of Greenpeace, warned “I fear a global cooling,” during his keynote address to the Ninth International Conference on Climate Change in Las Vegas on Tuesday. Moore, who left Greenpeace in 1986 because he felt it had become too radical, is the author of “Confessions of a Greenpeace Dropout: The Making of a Sensible Environmentalist.”

Moore noted that a cooling would adversely impact agriculture, and said: “Let’s hope for a little warming as opposed to a little cooling. I would rather it got a little warmer.”

The liberals will have to search elsewhere for that all encompassing panacea.

I suggest lima beans. Lima beans are causing all the gun violence and other woes in America. I simply detest lima beans. We must ban lima beans now! Or, at the very least, all lima bean eaters must register with the government and wait at least three days before applying for a lima bean license! Mandatory jail time for anyone convicted of Criminal Possession of Succotash!

This post is officially off the rails. I'm bailing out.
Posted by sig94 at 9:41 AM 7 comments:


Amazing performance without cadence or commands.
Posted by sig94 at 5:48 PM 4 comments:

Email ThisBlogThis!Share to TwitterShare to FacebookShare to Pinterest
Labels: Commitment, Marching, US Marines

Fasting during the Muslim holy season can lead to Irritable Islam Syndrome. The Ramadan fast lasts from Dawn til Dusk at which time you can fill your face all night long with Allah-Approved® binge eating and good old fashioned ultra-violence.


The Holy Month of Ramadan is upon us. Most people know the month-long fast is a time Muslims are expected to demonstrate self-control, humility and submission to the will to Allah. What you might not know is that throughout Ramadan emergency services are overwhelmed by a spike in crime—a phenomenon known as “Ramadan rage,” which affects not just Muslim countries, but cities with high concentrations of believers, from Dearborn to Deptford.

The effects of this gruelling annual fast have been widely studied. Researchers say those taking part risk migraines, dehydration, dizziness, tachycardia, nausea, circulatory collapse... and even gout, owing to a build-up of uric acid. Indigestion caused by binge eating is also a concern—as is weight gain: Muslims often pile on the pounds during the summer months.

But aside from these medical risks, and more pertinent to the emergency services and law and order, is the primary side effect of not eating, drinking or smoking in the daytime: irritability that can spill over into violence.

And if you don't feed the beast it just gets better.

The findings of the Algerian study are widely corroborated. From Egypt to Indonesia, recorded violent crime increases by incredible percentages throughout the fast. In addition, Ramadan exacerbates other social problems and spawns specific crimes all its own: offenses not generally seen at other times of the year. Child traffickers in Yemen, for example, take advantage of the increase in food prices to purchase children from poor parents.

There are other rules to Ramadan which can be found here.
Posted by sig94 at 1:12 PM 6 comments: