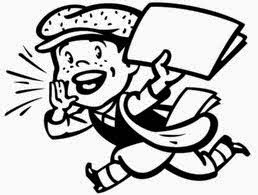 Claiming PTSD From His Experiences On Iwo Jima, Brian Williams Resigns From Medal Of Honor Foundation 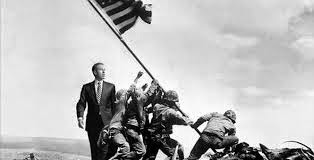 Shortly after announcing his resignation, Williams was interviewed by Oprah Winfrey. Visibly shaken, Williams could only murmur, "the horror" before walking away. He was last seen walking on 6th Avenue stroking his PTSD relief shih tzu dog...


Disgraced NBC News anchor Brian Williams has resigned from the Congressional Medal of Honor Foundation’s board of directors.

In a statement announcing the resignation Thursday, foundation president Ron Rand did not elaborate on Williams’ reason for the decision.

Williams, 55, has been on the foundation’s board since 2006. The organization supports the Congressional Medal of Honor Society, which presents the country’s highest military award for acts of valor above and beyond the call of duty.

The occasion of the 70th anniversary of the Battle for Iwo Jima sparked Williams' PTSD episode.

In a press release, DoD Undersecretary Harfa was quoted as saying, "These broomsticks were originally purchased in 2009 as part of Operation Ass Lift and,  having been decommissioned, are no longer flight capable. Under existing NATO reciprocal military equipment recycling agreements, these broomsticks were delivered to the Bundeswehr, Germany's Armed Forces."


The German army has faced a shortage of equipment for years, but the situation has recently become so precarious that some soldiers took matters into their own hands.

On Tuesday, German broadcaster ARD revealed that German soldiers tried to hide the lack of arms by replacing heavy machine guns with broomsticks during a NATO exercise last year. After painting the wooden sticks black, the German soldiers swiftly attached them to the top of armored vehicles, according to a confidential army report which was leaked to ARD.

Replacing Michele's broomsticks is no easy task. The White House has approved the purchase of an additional wide-load capable aircraft to support Operation Ass Lift.

NJ's Cumberland County sheriff deputies must have attended a seance wherein they contacted the ghosts of 18th century Hessian soldiers killed in the 1776 Christmas morning attack by Gen. George Washington on the city of Trenton, New Jersey.

Alarmed by the prospect of another such attack, this week Cumberland County deputies arrested a retired English teacher potential terrorist armed with an unloaded 200+ year old flintlock pistol that mightcould be used to terrify an entire county if:
a) black powder and ball were available, and
b) it fired without blowing up and killing the person holding it.

Mr. Van Gilder, a collector of 18th-century memorabilia, said he had the gun unloaded and wrapped in a cloth in the glove compartment of his vehicle when he was pulled over in November by a Cumberland County sheriff’s deputy for a minor traffic violation, according to a video posted last week by NRA News.

After consenting to a search of his vehicle, Mr. Van Gilder said he alerted the deputy of the pistol in his glove box. The deputy let him go that night, but four police officers showed up at his home the next morning with an arrest warrant, he told NRA News.

Although Cumberland County is about 75 miles south of Trenton, sheriff's deputies have been stationed along the Delaware River on the county's south shore, standing as a bulwark against rowboats that might be laden with hundreds of musket-bearing, sword-wielding terrorists.

Cumberland County, you may rest easy tonight, secure in the vigilance of your police. 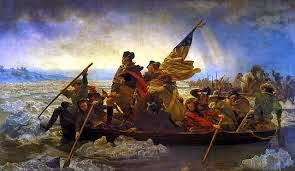 Because... it happened once, it could happen again.

New York's Democratic thug Gov. Andrew Cuomo speaks the truth. As long as he and other crooked politicians are in office there will be corruption in Albany.


There will always be corruption in government — and Albany is no worse than anywhere else, Gov. Andrew Cuomo said Monday.

“You’ve always had and you probably always will have some level of corruption,’’ said Cuomo in an interview with New York 1. 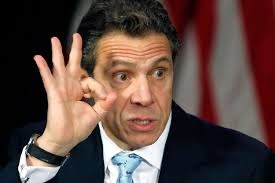 And he likes it that way.

His remarks stood in stark contrast to those of US Attorney Preet Bharara, who last week noted that state lawmakers are more likely to be arrested than be tossed out at the polls.

“When you have a degree of corruption that is that deep and pervasive and frequent, that’s a big problem,” Bharara told MSNBC.

Our military has responded magnificently to their Commander-in-Chief's diversity initiatives.

Men who are women, women who are men, frogs who are fishes, male dogs who are bitches, everyone is welcome, everyone has a part to play in the Armed Forces Opera.


JOINT BASE LEWIS-McCHORD, Wash. — Meet Tracker, a five-year-old, sixty-pound Belgian Malinois and a graduate of the Military Working Dog School at Lackland Air Force Base, Texas. He’s also one of the Army’s first five openly transgendered military police dogs, assigned to the 42nd Military Police Brigade at Joint Base Lewis-McChord.

“We took to each other pretty quickly,” said Spc. Jeffrey Grassley, a military policeman and dog handler partnered with Tracker. “I mean, it’s a little weird that they tell me to call him a ‘him,’ since he’s obviously a female dog, and there was that time last month when he was laid up for a few days after he gave birth to a litter of puppies, but we’ve really forged a close working friendship.”

Tracker, who was raised as a female dog under the name Regina, first identified as a male during the initial breeding and selection process the military uses to screen potential military working dogs.

“Looking back now, it was pretty obvious that she was — sorry, He — was a little different,” said Tech Sgt. Walter Flaherty, one of Tracker’s trainers. “He didn’t really say much, obviously, but you could just sort of tell.”

Email ThisBlogThis!Share to TwitterShare to FacebookShare to Pinterest
Labels: Humor, US Military

The petition states:
"I demand that you provide free tools to block unwanted robocalls before they reach my phone."

www.EndRobocalls.org
Posted by sig94 at 3:52 PM No comments: 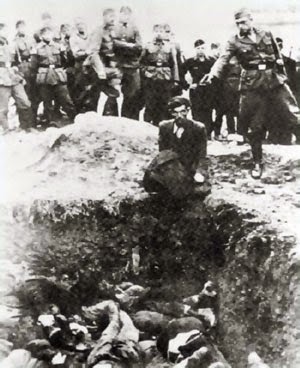 Truth be told, if I had a good job, I wouldn't be killing this Jew!

I can remember needing a job just a few times in my life. I am rather fortunate in that I always seemed to be able to do what I had to to support myself and my family. But every single time I returned home discouraged and downhearted because of unemployment, or whenever I hung up the phone without gaining a job interview, well, I dreamed of kidnapping Christians or Jews or a bunch of school girls and making a video while cutting their heads off ..... NOT.

The Obama administration must be running out of village idiots, they have so many.


Marie Harf, a spokeswoman for the U.S. State Department, said America can’t win against the Islamic State “by killing them” and ought instead to focus on addressing what she claimed was the root problem — their poor economy — and help them get jobs.

“We’re killing a lot of them, and we’re going to keep killing more of them,” she said during a televised segment on “Hardball” with Chris Matthews. “So are the Egyptians, so are the Jordanians. They’re in this fight with us. But we cannot win this war by killing them. We cannot kill our way out of this war. We need in the medium to longer term to go after the root causes that leads people to join these groups, whether it’s a lack of opportunity for jobs, whether …” 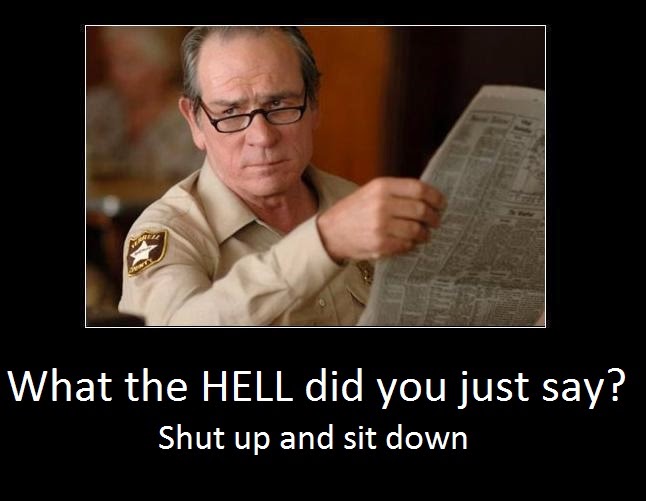 Killing always works; you just have to kill a lot more. Loosen up the ROE a bit (actually a lot) and shrug off the collateral damage like we did in WWII. Job done. Go home.

Mary Harf, you ignorant slut, you should have shut up. But nooo, when you hit intellectual bedrock with your little shovel you get yourself a backhoe...

Ms. Harf dug in and insisted improving the economic opportunities for the terrorist group is the key to turning back their terror, The Right Scoop reported. 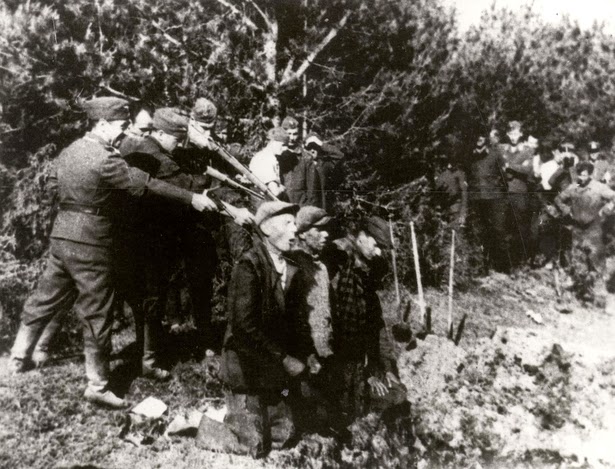 We could be shoveling pig shit rather than killing Der Juden!

“We can work with countries around the world to help improve their governance,” she said. “We can help them build their economies so they can have job opportunities for these people.” 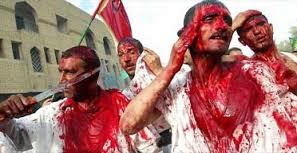 I can visualize Gen. Eisenhower, Gen. MacArthur, Gen. Marshall, Gen. Bradley and Gen. Patton giving themselves massive heavenly face palms once they realize that all they had to do to defeat the German and Japanese war machines was to offer their soldiers jobs. 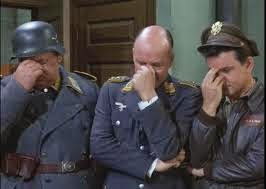 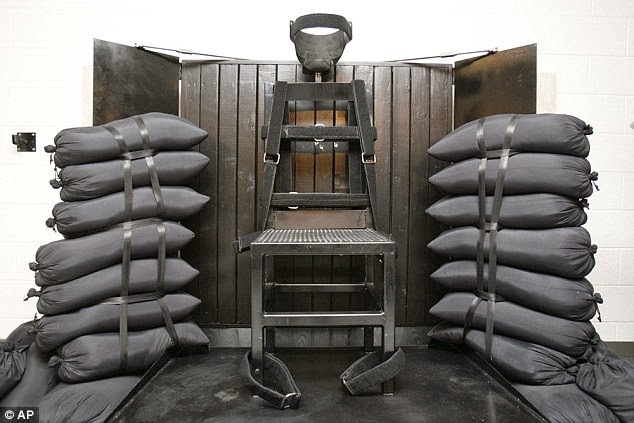 In 2010, Ronnie Lee Gardner was executed by five Utah police officers armed with .30-caliber Winchester rifles. There are only four bullet holes in the back of the chair so I am assuming that one of the officers was issued a blank. Or he forgot his glasses.

Once again, Utah seeks to use inexpensive, reliable American-manufactured munitions to carry out justice.

Utah is one step closer to once again using firing squads to carry out executions after a highly-contested proposal passed a key vote in the state's Legislature.

Before the vote ultimately passed in the Republican-controlled House of Representatives by a 39-34 margin yesterday morning, three missing lawmakers were summoned to break a tie.

The state voted to stop allowing prisoners to choose death by firing squad in 2004. 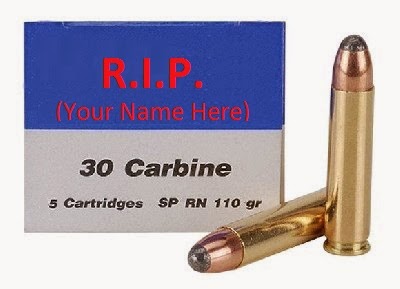 For the executed prisoner's loved ones, a lovely memorial 5-round box of
remanufactured .30 cal ammo is available using the very same brass.