This is almost two months old.
Funny how it didn't get a lot of press, no?

Candace Marie Claiborne has become the first Clinton-era State Department employee indicted on treason charges, after a federal grand jury indicted her for conspiring to defraud the U.S. government, concealing contact with foreign spies, obstructing an official proceeding, and making false statements to the FBI.

Claiborne, a veteran State Department employee who possessed a Top Secret security clearance, concealed her extensive contacts with Chinese intelligence agents, who for years lavished her with thousands of dollars in gifts as part of a pay-for-play scheme, according to a Department of Justice press release.

In addition to cash payments, Chinese spies provided Claiborne with vacations, an apartment, Apple electronics, and tuition to a Chinese fashion school, according to the indictment. Suggesting she learned tricks from Hillary Clinton, her former boss, Claiborne allegedly told co-conspirators to delete all emails and evidence after getting caught.

The bill of charges contains numerous felonies and Claiborne, 60, is facing spending the rest of her life behind bars, as prosecutors warn she is “the first of many” corrupt Clinton-era State Department employees that will be bought to justice by a reinvigorated DOJ.

This is too rich. Republican candidate for Congress gets arrested for assaulting an aggressive reporter, loses the support of three newspapers and still cleans the clock of his Democrat opponent in a Montana special election.

Republican multimillionaire Greg Gianforte won Montana's only U.S. House seat on Thursday despite being charged a day earlier with assault after witnesses said he grabbed a reporter by the neck and threw him to the ground.

Gianforte, a technology entrepreneur, defeated Democrat Rob Quist to continue the GOP's two-decade stronghold on the congressional seat. Democrats had hoped Quist, a musician and first-time candidate, could have capitalized on a wave of activism following President Donald Trump's election.

The Brits Are Furious

And I don't blame them. Draconian measures are needed to stop the leaks.

The world’s closest intelligence sharing arrangement is in jeopardy after key details and photographs from the Manchester bombing were apparently leaked by United States’s law enforcement sources to domestic journalists, leaving Manchester Police and the British government — who are collecting and analysing the finds — “furious”.
The United Kingdom has now stopped passing intelligence gathered as part of the investigation into the Manchester bombing to the United States according to claims made by the British state broadcaster BBC.

While British police had discovered the identity of Salman Abedi, the suicide bomber who killed 22 in Manchester on Monday, the name was withheld from the media initially for operational reasons. Yet less than 24 hours after the attack took place, American newspapers citing “government sources” were able to name the attacker.

[...]The nature and speed of the leaks by these U.S. officials have caused “disbelief and astonishment” in the British government.

Rep. Debbie Wasserman-Schultz (FL-D) threatened "consequences" if the DC police did not return a laptop that was recovered by Capitol Police after it disappeared while being sought in an investigation.

Mysteriously enough, the laptop was used by a Pakistani IT expert who is suspected of massive data breaches while hired to work in her office.


The Florida lawmaker used her position on the committee that sets the police force’s budget to press its chief to relinquish the piece of evidence Thursday, in what could be considered using her authority to attempt to interfere with a criminal investigation.

The Capitol Police and outside agencies are pursuing Imran Awan, who has run technology for the Florida lawmaker since 2005 and was banned from the House network in February on suspicion of data breaches and theft.

“My understanding is the the Capitol Police is not able to confiscate Members’ equipment when the Member is not under investigation,” Wasserman Schultz said in the annual police budget hearing of the House Committee On Appropriations’ Legislative Branch Subcommittee.

Imran Awan and his two brothers are suspects in one of the most serious security breaches in the history of Congress. Obviously Wasserman-Schultz has more than a passing interest in squelching this investigation. More here.
Posted by sig94 at 12:46 PM 4 comments:


Police now suspect a suicide bomber.
Reports are 19 dead and about 50 wounded.
Please pray for England.
Posted by sig94 at 10:00 PM 5 comments: 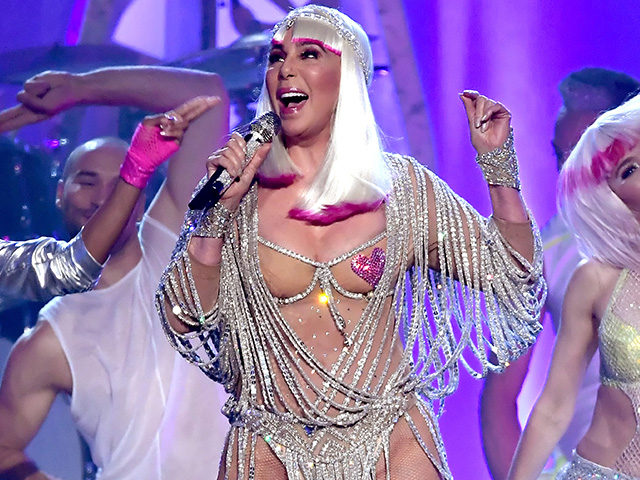 Pop icon Cher left little to the imagination while performing some of her biggest hits at Sunday night’s Billboard Music Awards, the singer’s first awards show concert in 15 years.

The 71-year-old icon performed her smash hits “Believe” and “If I Could Turn Back Time” Sunday night before accepting the ceremony’s Icon Award for her decades-long career in the music industry.

The Grammy- and Oscar-winner danced on stage wearing a silver diamante dress, with her chest covered up by heart-shaped nipple pasties. The sparkling dress, which consisted of multiple hanging diamond strips, barely covered the singers chest and groin area.

It's amazing what a little botox and a lot of cocaine can do.
Posted by sig94 at 8:15 PM 8 comments:

Rotten To The Core

How can she be hollow if she's rotten to the core?

"She is a completely hollow woman," Camille Paglia said, reflecting on Hillary Clinton's disastrous bid for the presidency six months after the former secretary of state fell to Donald Trump.

In an interview with the Washington Examiner on Tuesday, Paglia, who voted for Jill Stein in November, recalled red flags from the earliest days of Clinton's candidacy, pointing to her dependence upon artificial policy positions carefully manufactured in Brooklyn with the help of polls and focus groups.

"Hillary, when she first declared that she was a candidate," the bestselling author explained, "they asked her about her policies... and she refused to answer."


Source, the Washington Examiner
Posted by sig94 at 8:02 AM 4 comments:

Pence, the former governor of Indiana, was invited to speak after Notre Dame students and faculty protested the prospect of President Donald Trump being invited to become the seventh U.S. president to give the commencement address.

Poor widdle snowflakes all weewee'd up.

At which point the #snowflakes walk out searching for sand to stick their heads into... #NotreDameCommencement pic.twitter.com/WcgBRwfFYg
— James Woods (@RealJamesWoods) May 21, 2017

The NAACP realizes that it has lost its mojo.
They will seek a new CEO afer their current President, Cornell W. Brooks, completes his three year term. The NY Post reports:


“We believe as an organization, we need to retool to become better advocates, better at educating the public, better at involving them,” Derrick Johnson, vice chairman of the NAACP board of directors, said in a conference call announcing the change.

Johnson said the group would embark on a national “listening tour” as part of its re-branding. That kind of tour, which is a common strategy among politicians as they seek to gain public support, has never been done in the NAACP’s 108-year history, Johnson said.

Their "listening tour" better pay heed to their 75% illegitimacy race and the fact that although they only comprise 13% of the US population they commit over half the murders in the US. Is it poverty? Racism?  Sociologists are divided and there is no clear verdict, but business as usual means nothing changes. Educating the public does not stop murders and it gives the appearance that NAACP officials are trying to shore up support and perhaps lagging donations.

It's not social problems or financial woes that plague us, it's moral issues.
Posted by sig94 at 9:35 AM 3 comments: