I Couldn't say It More Eloquently

But lets face it, the socialists are coming against us from many directions: financially, morally - the list goes on and on as every facet of traditional American life has been subjected to a relentless onslaught.

And where did this attack first begin? Against biblical principles.

American's longest and strongest suite, the family unit, is already in ruins. This had to be the first target as the family unit is where biblical teaching really occurs. The attack gained momentum under Lyndon B. Johnson's administration. It was a dagger coated with honey - the War On Poverty was really a war on American families, especially black families. Get fathers out of the picture; who needs a dad when the government is there to provide money? And lets make divorce as easy as possible. The institution of marriage was ordained for one reason, to provide a loving environment for children. That has all but disappeared in our nation's urban black communities where 75% of children are born out of wedlock and black women are nearly three times more likely than whites to have an abortion.

Malachi 2:14- You ask, - “Why?” It is because the Lord is the witness between you and the wife of your youth. You have been unfaithful to her, though she is your partner, the wife of your marriage covenant. Has not the one God made you? You belong to him in body and spirit. And what does the one God seek? Godly offspring. So be on your guard, and do not be unfaithful to the wife of your youth. “The man who hates and divorces his wife,” says the Lord, the God of Israel, “does violence to the one he should protect,” says the Lord Almighty.


Our educational system, once the envy of the world, is but a shallow mockery of its former self. We have entire generations who do not know our nation's history but can give you a complete rundown on what celebrity bimbo is screwing what useless blockhead.

America was once regarded as a society of prudes because of our aversion to promiscuity - no more; we are just as morally depraved as much of the world.

The assault on the Second Amendment is just the finishing touch, the coup de grace so to speak for those of us too stubborn to surrender to evil.
Posted by sig94 at 3:24 PM 5 comments:

2nd Amendment For Me, But Not For Thee 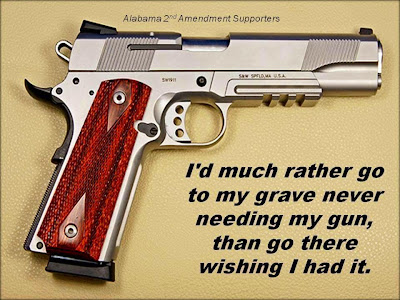 Bob Costas only echoes what most every other elite believes, guns are only for those people who are hired to protect them. As for everyone else - well - you're not rich so you don't need deserve protection.

The Beginning Of The Collapse 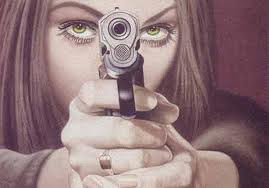 The result of decades of failed liberal pubic policy is coming to fruition as basic public safety services are starting to crumble in some American cities.
From the Daily Caller:

San Bernardino is so bankrupt that the city’s attorney is advising residents to “lock your doors and load your guns,” in the face of budgetary cuts that have downsized the police force by 80 officers.

City Attorney Jim Penman made his comments to about 150 residents at a council meeting assembled to address the uptick in crime, including the recent murder of an elderly woman. Since 2011, the California city has seen a 50 percent increase in murders.

“Let’s be honest, we don’t have enough police officers. We have too many criminals living in this city,” Penman told KCBS-TV. “We have had 45 murders this year. That’s far too high for a city of this size.”

Councilwoman Wendy McCommack, the organizer of the meeting, added, “You could tell the swell of frustration was coming over a lot of folks. They did not feel like they could get an officer out as quickly to some of the quality-of-life issues that they were dealing with as they would have preferred.”

Under fire for the blunt statement, the city attorney of 25 years didn’t back down. “You should say what you mean and mean what you say,” Penman insisted.

“I’m not advocating that people go out, who don’t have any training, and buy firearms. I certainly strongly caution anyone who has children at home not to have a loaded gun in the house,” said Penman.

As a child in the early fifty's I lived in San Bernadino.