Two NYPD officers were murdered this afternoon. This is a direction result of the reckless actions of Obama, Holder and Sharpton in their concerted efforts to inflame racial tensions. The NYPD has got to be going out of their minds.


Two uniformed NYPD officers were shot dead Saturday afternoon as they sat in their marked police car on a Brooklyn street corner — in what investigators believe was a crazed gunman’s execution-style mission to avenge Eric Garner and Michael Brown.

“It’s an execution,” one law enforcement source said of the 3 p.m. shooting of the two officers, whose names were being withheld pending family notification of their deaths.

The tragic heroes were working overtime as part of an anti-terrorism drill when they were shot point-blank in their heads by the lone gunman, who approached them on foot from the sidewalk at the corner of Myrtle and Tompkins avenues in Bed-Stuy.

“I’m Putting Wings on Pigs Today,” a person believed to be the gunman wrote on Instagram in a message posted just three hours before the officers were shot through their front passenger window.

I hope there is a special place in hell for politicians.


The gunman was a fugitive who had just murdered his girlfriend in Baltimore Saturday morning, sources told The Post.

Minutes after shooting the two officers, he, too, was dead.

He fled to a nearby subway station, the G-train station at Myrtle and Willoughby avenues, where, as pursuing cops closed in, he shot himself on a crowded platform, sources told The Post.

Update:
The NYPD PBA has announced that all members are to consider themselves on a wartime footing. I am posting this from Weasel Zippers but cannot find independent corroboration.


Starting IMMEDIATELY- At least two units are to respond to EVERY call, no matter the condition or severity, no matter what type of job is pending, or what the opinion of the patrol supervisor happens to be.

IN ADDITION: Absolutely NO enforcement action in the form of arrests and or summonses is to be taken unless absolutely necessary and an individual MUST be placed under arrest. These are precautions that were taken in the 1970’s when Police Officers were ambushed and executed on a regular basis.

The mayors hands are literally dripping with our blood because of his words actions and policies and we have, for the first time in a number of years, become a “wartime” police department. We will act accordingly. FORWARD MESSAGE IN ITS ENTIRETY TO ANY AND ALL MOS

Band Of Brothers - A French Perspective 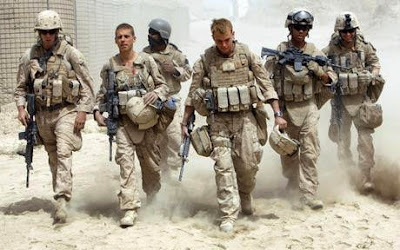 We may take for granted the prowess of the American soldier, but our allies don't.


What follows is an account from a French ISAF soldier that was stationed with American Warfighters in Afghanistan sometime in the past 4 years. This was copied and translated from an editorial French newspaper.

"We have shared our daily life with two US units for quite a while - they are the first and fourth companies of a prestigious infantry battalion whose name I will withhold for the sake of military secrecy. To the common man it is a unit just like any other. But we live with them and got to know them, and we henceforth know that we have the honor to live with one of the most renowned units of the US Army - one that the movies brought to the public as series showing "ordinary soldiers thrust into extraordinary events". Who are they, those soldiers from abroad, how is their daily life, and what support do they bring to the men of our OMLT every day? Few of them belong to the Easy Company, the one the TV series focuses on. This one nowadays is named Echo Company, and it has become the support company.

[...] Heavily built, fed at the earliest age with Gatorade, proteins and creatine - they are all heads and shoulders taller than us and their muscles remind us of Rambo. Our frames are amusingly skinny to them - we are wimps, even the strongest of us - and because of that they often mistake us for Afghans

[...]And they are impressive warriors! We have not come across bad ones, as strange at it may seem to you when you know how critical French people can be. Even if some of them are a bit on the heavy side, all of them provide us everyday with lessons in infantry know-how. Beyond the wearing of a combat kit that never seem to discomfort them (helmet strap, helmet, combat goggles, rifles etc.) the long hours of watch at the outpost never seem to annoy them in the slightest. On the one square meter wooden tower above the perimeter wall they stand the five consecutive hours in full battle rattle and night vision goggles on top, their sight unmoving in the directions of likely danger. No distractions, no pauses, they are like statues nights and days...

[...]And combat? If you have seen Rambo you have seen it all - always coming to the rescue when one of our teams gets in trouble, and always in the shortest delay. That is one of their tricks: they switch from T-shirt and sandals to combat ready in three minutes. Arriving in contact with the enemy, the way they fight is simple and disconcerting: they just charge! They disembark and assault in stride, they bomb first and ask questions later - which cuts any pussyfooting short.

Email ThisBlogThis!Share to TwitterShare to FacebookShare to Pinterest
Labels: Afghanistan, France, US Military

Google "SEIU violence" and settle down with some popcorn.

Surprise, Surrise. The first arrest in the beating of two NYPD Lieutenants is a big shot for the SEIU. Of course he is a union (community) organizer.

I imagine I am channeling every cop in the country when I say, "I'd love to see how tough this guy is when there isn't a mob backing him up. Just give me a minute alone with him, that's all I ask."


One “alleged” cop-beater down, six to go.

An organizer at the city’s largest union surrendered to cops Thursday and was charged with busting an NYPD lieutenant’s nose during a videotaped mob attack on the Brooklyn Bridge.

Crown Heights resident Rob Murray, 43 — who makes more than $105,000 a year with the Service Employees International Union — turned himself in at the 5th Precinct station house in Chinatown with his lawyer around 8 a.m.

Five individuals are still wanted in this assault. 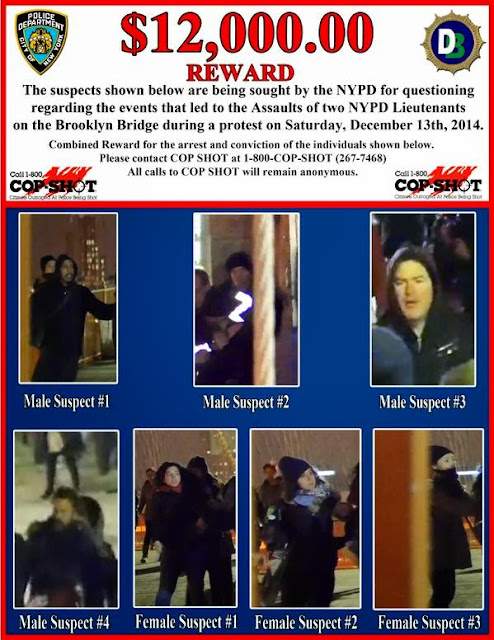 Scratch the surface of SEIU and you'll have to scrape the thug from underneath your fingernails.
Posted by sig94 at 1:23 PM No comments:

So much unrest and uncertainty in the world.

Russia's economy is tanking due to sanctions so Putin is ripping off his shirt and channeling his inner Cossack.

The NSA is interpreting the skidmarks on our underwear.

Congress don't give a shit as they have already stolen everything that wasn't nailed down since Teddy Roosevelt was President.

Meanwhile, the idiot in the White House can't break himself away from ESPN.


Unsettled times remind me of when I was an undergrad. We didn't trust the government then and don't trust it now.

COLUMBIA, S.C. (AP) — As he drops new hints about his 2016 intentions, former Florida Gov. Jeb Bush is appearing in South Carolina just weeks before a self-imposed deadline to decide whether he will run for president.

Bush is scheduled to give Monday’s commencement address at the University of South Carolina. It marks the Republican leader’s second visit in three months to the state that will host the 2016 presidential primary season’s first contest in the South.

In a television interview aired on the eve of the South Carolina appearance, Bush expressed confidence that he “would be a good president,” adding that he was in the process of writing an e-book about his time as governor that would come out in the spring. He also said he would make public about 250,000 emails from his time in office, in an effort to promote transparency and to “let people make up their mind,” he told ABC’s Miami affiliate WPLG-TV.

I've already made up my mind. No, hell no.

Moses only had to deal with one burning bush. We've had two so far. No more.

So Ya Wanna Play Football 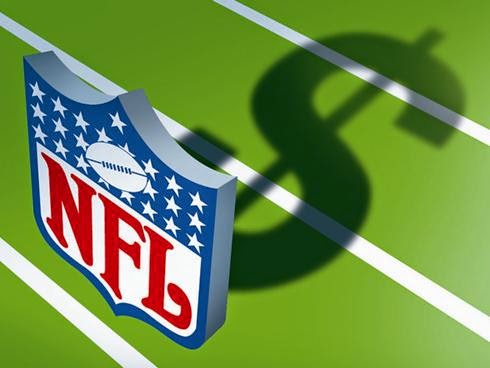 There is an article in the NY Post detailing the injuries and financial hardships of retired NFL football players. A number of players suffer dementia, debilitating joint pain, and bankruptcy...


While much-publicized concussions and head injuries account for some of the problem, they’re just one possible hardship of many for those who spend years slamming into each other at full speed.

“Since 2011, at least seven NFL players or former players have committed suicide,” the authors write, noting that one of these, Jovan Belcher, “also killed his girlfriend.”

Super Bowl quarterback Jim McMahon suffers from dementia. Hall of Fame running back Earl Campbell “can barely walk,” and “quarterbacking legend John Unitas lost the use of [his] hands and fingers.”

Ex-NFLers Curt Marsh and Jim Otto have both “lost limbs to football injuries.”

On the money end of things, Terrell Owens “is nearly penniless despite earning top dollar for years,” and “seven-time Pro Bowl defensive tackle Warren Sapp has filed for bankruptcy.”

Sapp's NFL earnings totaled over $82 million. Now he claims he has nothing.
Terrell Owens made almost $70 million in his career.  Also claims nada net worth today.
Earl Campbell has a net worth (2012) of $25 million.

Here is a list of all current NFL salaries.

Many of these players sound like they exercise the same fiscal restraint as the US government.

As far as injuries go, football players have been getting slammed down and banged up for well over a hundred years. And only now the players are aware of the risks? I call BS on this.

Here's some of the NFL's early history:


1895
John Brallier became the first football player to openly turn pro, accepting $10 and expenses to play for the Latrobe YMCA against the Jeannette Athletic Club.
1896
The Allegheny Athletic Association team fielded the first completely professional team for its abbreviated two-game season.
1897
The Latrobe Athletic Association football team went entirely professional, becoming the first team to play a full season with only professionals.
1898
A touchdown was changed from four points to five. Chris O’Brien formed a neighborhood team, which played under the name the Morgan Athletic Club, on the south side of Chicago. The team later became known as the Normals, then the Racine (for a street in Chicago) Cardinals, the Chicago Cardinals, the St. Louis Cardinals, the Phoenix Cardinals, and, in 1994, the Arizona Cardinals. The team remains the oldest continuing operation in pro football.
1900
William C. Temple took over the team payments for the Duquesne Country and Athletic Club, becoming the first known individual club owner.

I don't want to marginalize these injuries. I watched the 1986 game where the Bears Jim McMahon was picked up by the Packers Charles Martin *spit* and slammed to the ground. I was outraged. Martin should have been arrested.

But let's put this in perspective. Football players are not indentured servants; they are all volunteers and they make a damn sight more money than our people in the armed forces, police and fire who face greater risks.

Dimitri Diatchenko, who has had small roles in shows like “Sons of Anarchy,” “Walker, Texas Ranger” and “How I Met Your Mother,” was charged with killing and eating his ex-girlfriend's pet rabbit, authorities said Wednesday.

They added that Diatchenko sent his former flame grisly photos of the procedure and threatening to do the same thing to her.

The 46 year old, of North Hollywood, was charged Tuesday with felony counts of cruelty to an animal with use of a knife and making criminal threats.

He faces up to four years and eight months in prison if convicted.