How Ebola Is Done

Nigeria managed to stop ebola in its tracks. What did they do?


...there has not been a new case of the virus since September 5. And since September 24 the country's Ebola isolation and treatment wards have sat empty. If by Monday, October 20 there are still no new cases, Nigeria, unlike the U.S., will be declared Ebola free by the World Health Organization (WHO).

What can we learn from this African country's success quashing an Ebola outbreak?

Apparently Nigeria has people who know what they're doing running their disease prevention. Wonder if they'd like to come here...
Posted by sig94 at 3:12 PM 3 comments: 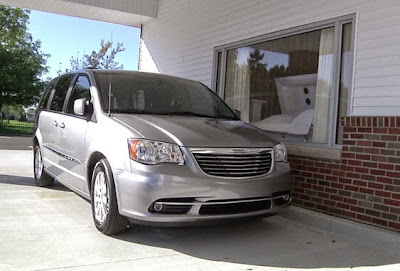 SAGINAW, Michigan — Only a couple of families have taken advantage of a new service available at a Saginaw funeral home.

Paradise Funeral Chapel recently started offering the option, which allows mourners to pay their last respects on the go. It was designed in part to cater to those with physical limitations.

The funeral home's president, Ivan Phillips, says he expects more customers to opt for the drive-thru once they learn it's not a gimmick and is safe to use.

[...]Curtains covering the window open when sensors underneath the pavement recognize the presence of a car. Mourners then get three minutes to view the body as music plays.

The Chapel owners also are planning to install a car wash in the viewing area. They'll call it "The Final Rinse."

Email ThisBlogThis!Share to TwitterShare to FacebookShare to Pinterest
Labels: death, Funerals, Our Culture 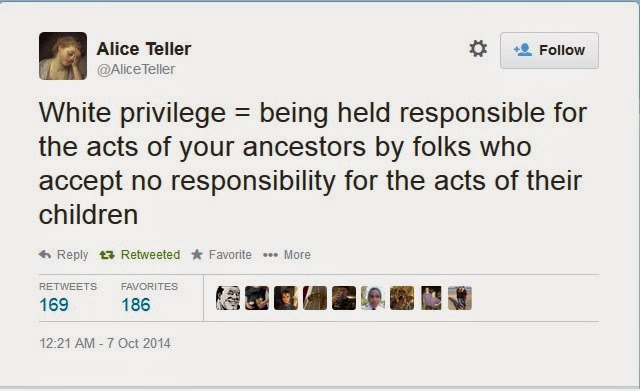 There's a story that goes along with this but I just don't care what it is. 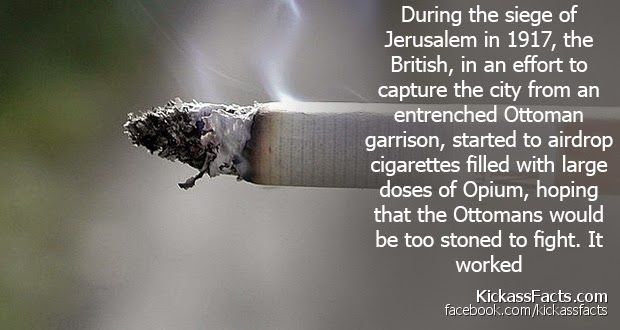 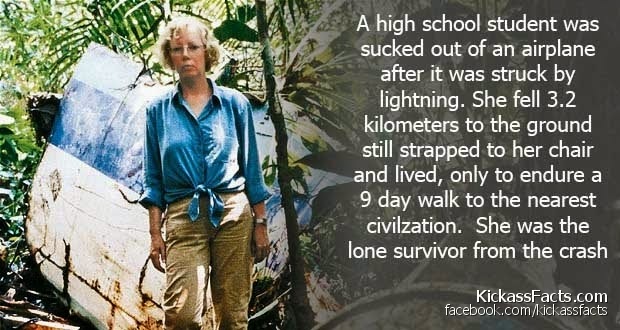 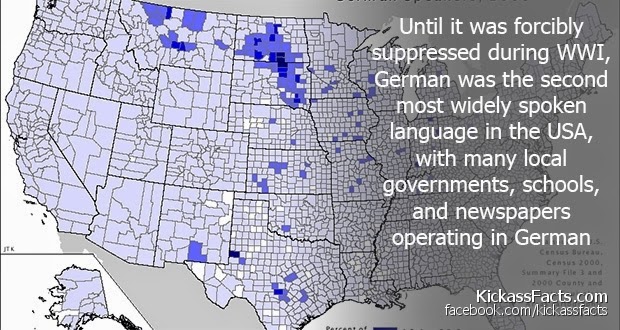 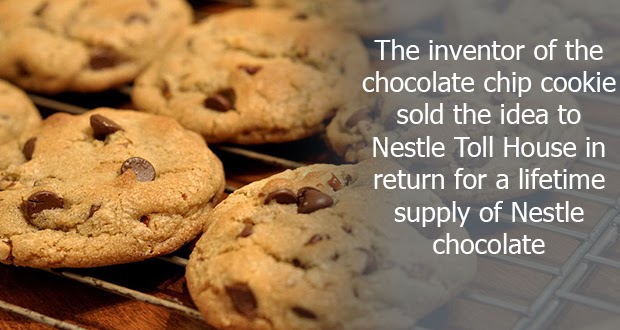 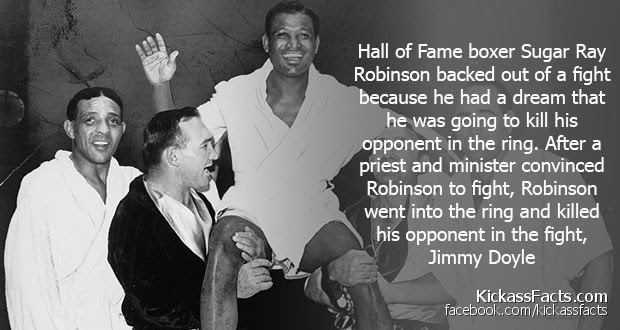 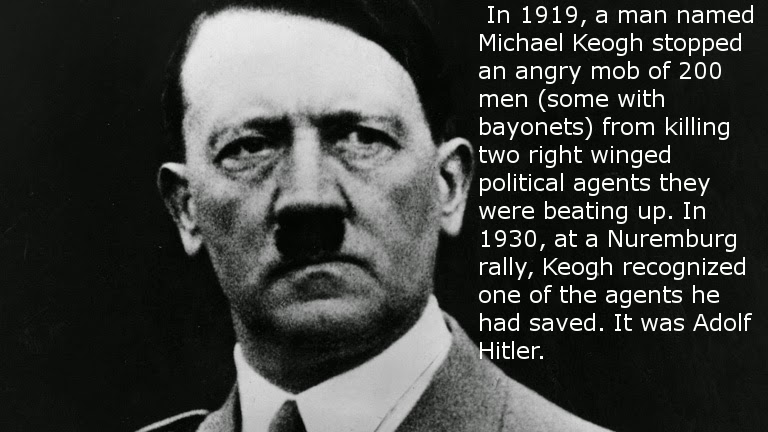 http://www.turtlebunbury.com/history/history_irish/history_irish_keoghandhitler.htm
Posted by sig94 at 6:00 AM 4 comments: 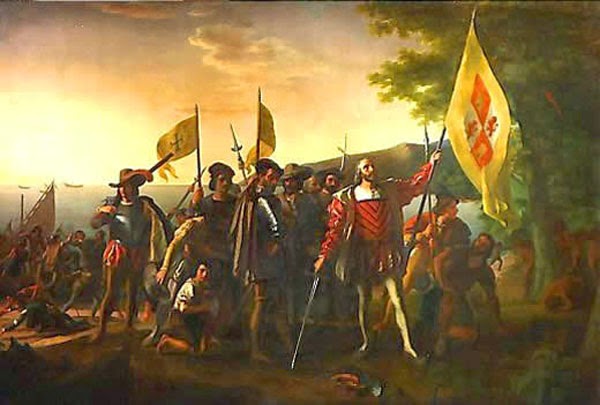 A friend of mine is finishing up his master's degree in history and posted the following:


In the 8th century Spain was invaded and occupied by Muslims. For more than 700 years Islam ruled. In 1453 the Ottoman Turks conquered Constantinople. Europe was being bottle up at both ends. The Ottoman conquest captured the Balkans and was not halted until 1683 at the Battle of Vienna. Spain was restored to the Spanish, but it took the combined strength of Ferdinand of Aragon and Isabella of Castille in 1492. The Ottomans continued to block the eastern trade routes. The Portuguese decided to sail around Africa, but Columbus thought it would be better to sail west to get to the east. Columbus totally miscalculated the size of the Earth. Even until his death he never admitted his mistake.

Should we honor Columbus today? Absolutely! He was on a mission of discovery, not conquest. He was not a genocidal maniac. He was also trying to counter the blood thirsty conquest of the Arab and Turkish Muslims that were trying to convert European Christians. Remember folks Islam is spread by the sword not by spiritual conversion. Cutting off the heads of those who do not convert is an old tradition for Muslims. Like him or not he changed the course of world history and quite honestly for the better.

Interesting how the Muslim invasion of Europe is viewed as a beneficial thing, even though tens of thousands were killed, even non-belligerents. And Columbus’s bumping into Haiti is worse than the Stalin, Mao, and Hitler combined.

[...]The Spanish Catholics were not much better than the Muslims. After the conquest of Granada in the spring of 1492 they forced all Muslims to either convert or leave. Then in July of the same year they did the same to the Jewish population. The people who did convert were known as "Conversos," and they were all rounded up and beheaded during the Spanish Inquisition the flowing year. . . Moral of the story? Everyone throughout history was an asshole.


IMHO the truth is usually found somewhere between the extremes. Did Columbus do bad things? Of course he did. There is a world of difference between the 15th century view of the world and what we accept today. Did he violate the prevalent world view at that time on how to treat indigenous peoples? I gather not.

Columbus was obviously not what we would call a godly man;  his main interest was commercial gain because that was the only way he could convince his financial backers to give him funding ... just like today's business models.

In many ways Columbus was not a competent administrator of the native peoples he encountered. It is forgotten that the first people he met in the Caribbean were cannibals (at a minimum the Caribs practiced a ritualistic form of cannibalism -  if you only eat people three times a year are you still a cannibal? Eat only the good parts?) although he was  criticized (and rightfully so) for his harshness in dealing with the Arawaks who were very successfully evangelized. The Spanish missionaries that he brought were very vocal in their criticism of him. The Spanish nobility were not pleased with his commerce in slaves and freed those he brought back to Spain. Curiously, his commerce in slaves was attacked not because it was immoral, but because it was illegal.

Yep - Columbus was in many ways was a real jerk. But just about every 15th century explorer could probably be considered a jerk by modern standards and he still put together a risky plan that introduced the Americas to Europe, for better or for worse. IMHO he made more of a difference for America than MLK.

And as far as standards go, I am sure 15th century folk would be absolutely appalled at the barbary of our modern practice of abortion that has killed over 53 million babies since 1973.
Posted by sig94 at 8:04 PM 3 comments: