It didn't take long to be wrenched back into reality.

Pemf, but... what a load of bastards.
Posted by GoodnightVienna at 4:38 PM 4 comments:

In case you haven't seen these clips, here they are in all their joy. It was an absolutely terrific day off from the daily politics, when we could all sit back, relax and enjoy it for what it is: a theme park in which we all live happily ever after. Don't get me wrong; I'm as big a sucker for romantics and make-believe as the next man but these two made my day so I thought I'd share them:

A better tactic than kettling:

Posted by GoodnightVienna at 3:41 PM 6 comments:

You'd think that the MSM would have signed off on the "Obama Lies" memo before now. The more you strip away from this man, the less there is you want to know.

In a pants-on-fire moment, the White House press office today denied anyone there had issued threats to remove Carla Marinucci and possibly other Hearst reporters from the press pool covering the President in the Bay Area.

Sadly, we expected the White House to respond in this manner based on our experiences yesterday. It is not a truthful response. It follows a day of off-the-record exchanges with key people in the White House communications office who told us they would remove our reporter, then threatened retaliation to Chronicle and Hearst reporters if we reported on the ban, and then recanted to say our reporter might not be removed after all.

The Chronicle's report is accurate.

If the White House has indeed decided not to ban our reporter, we would like an on-the-record notice that she will remain the San Francisco print pool reporter.

I was on some of those calls and can confirm Ward's statement.

The original story about the protest at an Obama fundraiser is here. The incident that the White House is trying to cover up are threats to punish the reporter who video-recorded the fund raiser incident on her cell phone. This is the video-recording:

Everything about this man is phoney; his life, his words, his actions. That he walked into a Baptist church on Easter is only proof that he got lost. And he is lost - emotionally, spiritually, intellectually and morally.
Posted by sig94 at 8:52 AM 5 comments: 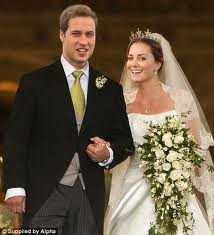 There is something about a royal wedding that captures our imagination. Especially with this young couple. I do enjoy the antics of Di's boys.
I am very glad that there is no American Royal Family despite the attempts of the Kennedy clan. We can enjoy the triumphs and foibles of the Brits without the calories and morning after regrets.

Watch it all here.
Posted by Anonymous at 7:04 PM 5 comments:

These Are Evil People 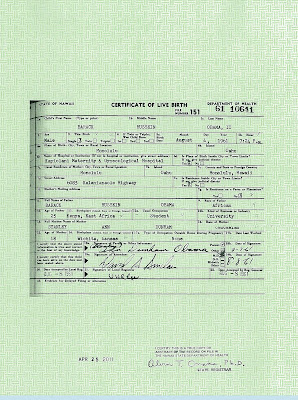 Okay, so Obumbles releases his Certificate of Live Birth this morning and now everything is fine, right? Barry is an upstanding American citizen eminently qualified to be President yada yada yada. I looked at the COLB furnished by the White House and it doesn't look like anything I've ever seen that purports to be an official birth certificate. Why? There isn't a seal.

Every BC I have ever seen has the raised seal of the authority whereby the document was released. Sorry, but a seal has been a singularly foolproof means of ascertaining authenticity for millennia.

Now look at these Hawaiian COLB's from a set of twins who were born just before Obumbles in August of 1961 at the very same hospital, the Kapiolani Maternity & Gynecological Hospital. 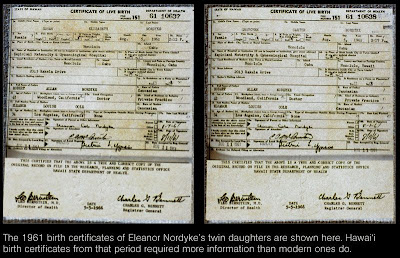 Now, look at the bottom of the COLB where the date 5-5-1966 is. Do you see it? That is a raised seal of the agency who issued the copy, certifying that it is authentic. Some one in the Registrar's office made a copy of the original birth certificate and then slammed a metal seal into it just like King Henry VIII did when he signed Ann Boleyn's death warrant and sent her to the block.

Now the State of Hawaii may send out electronic forms for convenience sake; makes it easier for the document owner to email it wherever it has to go. Fine, no problem. But read this account of the rigmarole that Obumbles people had to go through in order to get a copy of his COLB released. From the Washington Post:

[...] Trump was a major factor, by the White House’s own admission, as the real estate mogul’s near-constant interviews perpetrated a discussion that the president found “frivolous.” Last week, it was Obama who made the call to proceed. “He was the driving force,” the official said.

The swift action that followed – in less than 10 days, Obama’s lawyers were able to obtain the legal waivers necessary to bring copies of the certificate back to the White House – raised questions about the timing. Why, for example, did Obama officials wait so long to tamp down rumors that have dogged the president since the 2008 presidential campaign? Why did they release the forms on the very day that Trump is making his first visit to New Hampshire, and during a week when Obama is slated to make other major announcements about his national security team?

The issue is this. Are you telling me that Obumbles does not have his own copy? How did this man go through his professional life without a copy of his own birth certificate? He'll be fifty this August and he doesn't have a copy? If he was in such a hurry to get this document produced, why didn't he make a certified copy of his own rather than have government officials jump through a hoop for a week and a half? Why allow this controversy to go on for three years? A good man, a Colonel, went to jail over this. And then, when the document is finally released - it's a fake.

These people are just plain evil.

ADDENDUM: I just love Latin.
A Patriotic Rottweiler has this video on his blog. It gives a different form of analysis than IOTW but it yields the same results, Obama is a lying son of a bitch. 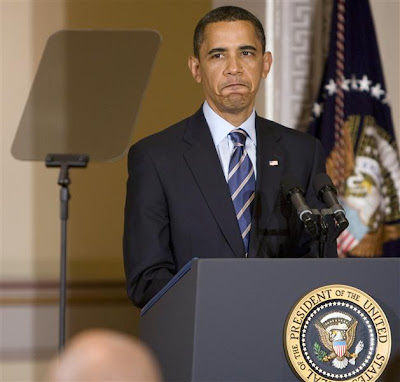 Last seen wandering the West Wing in tears.
From IOTW:

Hubert J. ‘Hub’ Schlafly Jr., a television engineer who aided countless politicians and performers when he helped invent the teleprompter, died on April 20, 2011 of undisclosed causes. 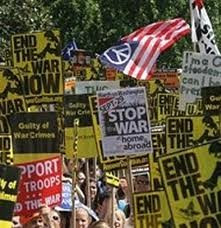 John Stossel at Fox Business News comments on how the war protestors have all but disappeared now that a leftie is in the White House.

The anti-war movement was all over the news before President Obama was elected. But apparently they weren’t really anti-war ... they were just anti-President Bush. Two college professors just released a study of national protests between 2007 and 2009. What did they find?

… After January 2007, the attendance at antiwar rallies [measured in] roughly the tens of thousands, or thousands, through the end of 2008.

… After the election of Barack Obama as president, the order of magnitude of antiwar protests dropped [...] Organizers were hard pressed to stage a rally with participation in the thousands, or even in the hundreds. For example, we counted exactly 107 participants at a Chicago rally on October 7, 2009.

Amazing. Especially because the war in Afghanistan ramped up after Obama was elected. American fatalities shot up in 2009 and 2010.

The protesters have remained silent over Libya.

And I’m struck by the hypocrisy of the supposedly “anti-war” politicians who voted against Iraq, like Nancy Pelosi. Since Obama was elected, she has voted to continue the war in Afghanistan … and supported the attack on Libya. 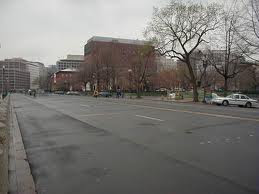 And now? You can fire a cannon down the street from the White House and not hit a soul...

Gas is now over $4/gal here in central New Yawk. I paid $3.87/gal last Thursday. It's like someone greased the skids to Hell. And I lay the blame at the feet of the idiot in the White House. Of course the media still carries Obongo's water and refuses to besmirch the sacred nature of His Emptiness. It reminds me of the Muslim anger directed at nonbelievers whenever the Quran is questioned or their Prophet, Bees Pee Upon Him, is maligned. There can be no criticism of Obongo because "All Your Blame Belongs To Bush."

The Real Revo has a nice piece about this.

As gas prices rose in 2008, network reporters mentioned President Bush in 15 times as many stories than they brought up President Obama in a similar period in 2011.

Bush drew gallons of coverage in 2008. Comparing a 20-day span of rising gas prices in 2008 to 24 days of rising prices in February 2011, the Business & Media Institute found the networks did more than 2 ½ times as many stories during the Bush years versus Obama.

Of course, unlike Bush, Obama has actually called for increases in the price of gasoline in order to goose his green dream. He has placed moratoriums on drilling and, as we reported today, stopped drilling for bogus reasons.

All of this, of course, is trivial compared to his policy of deep deficit spending, a weak dollar and quantitative easing. The irony is that the media blamed Bush for the price of oil and it wasn’t really his fault. Meanwhile, the RDM excuses Obama and it actually is his fault. It is maddening.

I had forgotten this quote. What a great wrap up.

“If I had my choice I would kill every reporter in the world, but I am sure we would be getting reports from Hell before breakfast.” ~William Tecumseh Sherman

Here's another one from Gen. Bill:

I hate newspapermen. They come into camp and pick up their camp rumors and print them as facts. I regard them as spies, which, in truth, they are.

He Is Not Here 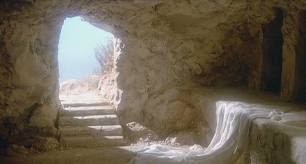 And the angel answered and said unto the women, Fear not ye: for I know that ye seek Jesus, which was crucified. He is not here: for he is risen, as he said. Come, see the place where the Lord lay.
Matt 28:5-6