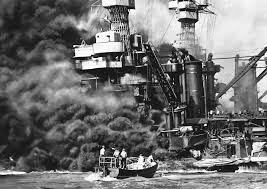 As the people of a prosperous, powerful nation, it is easy to think that the tomorrow will be as today - that we may eat, sleep and be merrily watching our large screen flat panel displays.

As the people of a prosperous, powerful and immoral nation it is easy to think that God will not use a lesser nation to humiliate and humble us.

The events of September 9th and December 7th should be forever scarred into our national DNA. Instead, we allow vain, self-seeking politicians and their obedient media minions to lull us into a sense of false security.

Learning From Other People's Mistakes

Chris Matthews gave President Obama's leg a good humping in their interview. I won't bother posting the interview here but you can see the bill that's going out from the White house. 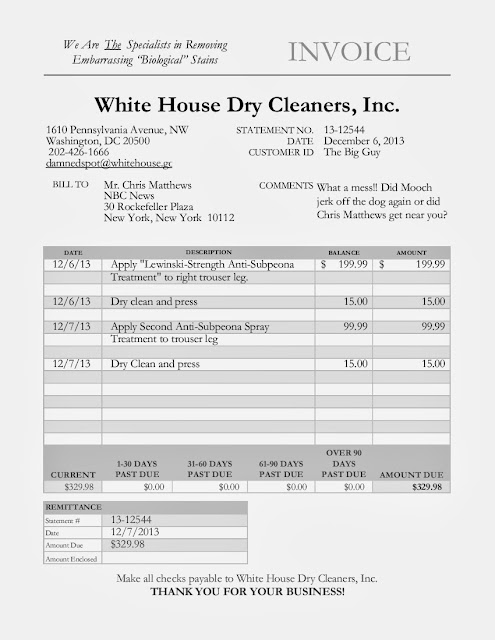 Affirmative Action Is Not The Only Nail In The Coffin

Some our our commentors have suggested, and rightfully so, that a significant proportion of police misconduct can be attributed to minority hiring quotas forced upon municipalities.

First,allow me to offer this article, "The Case Against Affirmative Action." Perhaps the most succinct judgement against affirmative action is voiced by the author at the end of his work,


"Martin Luther said that humanity is like a man mounting a horse who always tends to fall off on the other side of the horse. This seems to be the case with Affirmative Action. Attempting to redress the discriminatory iniquities of our history, our well-intentioned social engineers now engage in new forms of discriminatory iniquity and thereby think that they have successfully mounted the horse of racial harmony. They have only fallen off on the other side of the issue."

However, the question still remains as to whether or not various public agencies, such as the police, have suffered injury to personnel quality assurance issues through affirmative action.

I certainly believe so.

In fact I believe that the judges who have so arrogantly assumed the role of social engineers have not only fallen off the other side of the racial harmony horse, they then walked to the front of the animal and cut its throat. In this endeavor they were ably assisted by our nation's race pimps who applauded the loudest as the poor beast sank to its knees and wielded the sharpest knives as its carcass was cut up for dog food.

Let's take as an example the Washington, DC Metropolitan Police Department or MPD as reported in 1994 or thereabouts regarding the mentally incompetent female police officer hired by MPD. This was a person who would be in our school's "special" classes who supposedly passed a civil service test, graduated from a police academy and was issued a gun, which she then used to put a hole in her boyfriend. The black female was found to have an IQ below 75 and was therefore found mentally unfit to stand trial.

To gauge the effect of affirmative action one must not isolate it from the political system that created it; it is more than just affirmative action that gets these appalling people into our public service agencies. There are politicians, bureaucrats, professors, teachers, union officials, community organizers - literally a cast of tens of thousands who share in the destruction of what was once one of the world's finest civil service systems.

Nothing may better demonstrate the destructive power of bad law and corrupt politicians than the effect of the election of Marion Barry as Mayor of Washington, DC.  Indeed, to encounter a more gut-wrenching reversal of a municipality's fortunes one must to travel to Detroit. In either case, we are witnessing weapons grade stupidity, incompetence and malfeasance. To quote the National Review :


[...] In 1978, Barry was elected mayor. He had an animus against the police force, based not just on the jaywalking incident, but also on a perverse view of law enforcement in general. He viewed the police not as a force city politicians were supposed to improve and reinforce, but as an "occupation army" (as he once put it) that must be restrained. One of his top goals as mayor was to shrink the police department. Within eight years, he had chopped it down more than 25 percent, to 3,800 officers. The police force began to rot from within as well. Training virtually halted. Equipment problems became so severe that police cruisers used tires discarded by the Park Police. Many of the best officers grew demoralized and quit, and the mayor made sure they weren't replaced. He lorded over the police, insisting that he approve every promotion above the rank of captain. Choking on patronage, the department became a personal security force that facilitated Barry's own crimes (though these were eventually exposed). Most infuriating of all, from a law-enforcement standpoint, was how Barry reveled in this dubious achievement: The downfall of the police was marketed as uplift of the people. The only thing that went up, however, was the crime rate. Barry seemed unconcerned. "I'm not going to let murder be the gauge since we're not responsible for murders, can't stop the murders," he said in 1989.

What is far more difficult to stop is political corruption. Looking at the NR paragraph, what current administration comes to mind? What Marion Barry did on the local level, Obama is doing nation-wide.

Mook With A Badge 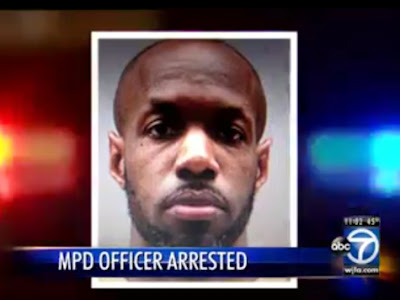 Let's face it, we don't get our cops from a clone factory in Utah. Nope, our cops come from our neighborhoods, our schools, our communities. And as the standards for moral and civil conduct decline, so does the common stock from which we draw our public servants. Like this mook with a badge...


WASHINGTON D.C. - A seven-year veteran of the Metropolitan Police Department has been arrested and charged with production of child pornography after allegedly photographing a naked 15-year-old girl at a D.C. apartment, while he was on duty, and in uniform. After an investigation, Officer Marc Washington was taken into custody on Monday, shortly after allegations surfaced.

According to charging documents, Washington allegedly took photos of a 15-year-old girl while conducting an investigation into a missing persons report. He allegedly went over to the girl's house in Southeast Washington on Sunday night. Authorities say the girl had previously been reported missing and Washington claimed he needed pictures of her injuries despite the fact the girl said she had not been injured. Washington allegedly coerced her into stripping down naked, claiming he needed photos for identification purposes and that it was procedure.

Guess Who's Been Naughty? 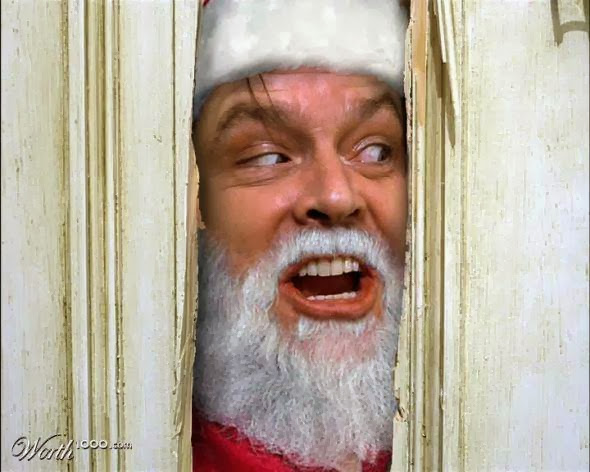 Not The Crimson Tide She Expected

It was an amazing end, an unexpected conclusion to a hard fought contest. Then something like this had to happen...

An Alabama fan was shot dead after a fight outside a football-watching party shortly after the Crimson Tide lost in a stunning upset to the Auburn Tigers Saturday.

Michelle Shepherd was attacked by fellow fans of the University of Alabama after she commented that she didn't care that much that the team had lost, her sister says.

[...] Ms Shepherd, a mother of three and a career social worker from Birmingham, attended a party to watch the Iron Bowl with other Alabama fans in Hoover, Alabama with her sister Neketa Shepherd, Neketa told the Birmingham News.

Apparently another intoxicated female who was a "better" fan killed this young woman.

Murder, Inc.
According to a recently published study , Planned Parenthood has a new name - a name that is verified by actual data from the world's largest abortion mill.

The Chinese examined the data regarding the incidence of breast cancer in woman who have undergone abortions. The results are terrifying.

[...] a meta-analysis pooling 36 studies from 14 provinces in China, showed that abortion increased the risk of breast cancer by 44% with one abortion, and 76% and 89% with two and three abortions.

This new article is another example of the recent excellent scholarship on abortion in peer-reviewed journals coming out of the People's Republic. There is no bigger data base than China, where there is an average of 8.2 million pregnancy terminations every year, and 40 abortions for every 100 live births. Chinese researchers and physicians are unencumbered by abortion politics, and do not cover up data showing long term effects of induced abortion, as do their US counterparts in governmental, professional and consumer organizations.

If any nation would support universal, unlimited abortions,it would be the Chinese. For decades the Chinese government has restricted families to one child.

UPDATE:
In 1979 the Chinese government instituted it's family planning policy of one childbirth per family. Since then, using liberal phraseology, the Chinese have "averted" over 200 million births. Every year the Chinese kill as many children as the entire population of New York City - about 8.2 million.

Hitler would be proud on how the population control methodology of the Third Reich has been incorporated into modern society..
Posted by sig94 at 10:07 AM 5 comments: