The Wisdom Of Napoleon

Emperor Bonaparte made some pretty profound observations that are still pertinent today.


In politics stupidity is not a handicap.
Napoleon had a horse named Biden.
He shot it.

If you wish to be a success in the world, promise everything, deliver nothing.
Napoleon looked into the future and saw American lofo voters.

Men are more easily governed through their vices than through their virtues.
The cultivation and maintenance of America's vices is now the sole concern of our politicians.

Four hostile newspapers are more to be feared than a thousand bayonets.
Blogs are the bayonets of today. Fear them.
Posted by sig94 at 11:30 PM 2 comments:

Another soldier has been murdered at Fort Hood. This is terrible, just terrible.

RONKONKOMA - Military officials have announced an army sergeant will be charged with murder in the shooting death of a veteran from Ronkonkoma.
Army Sgt. Brett Wessel allegedly shot and killed Ryan Dickinson, 26, during a dispute at Fort Hood in Texas last week.

Dickinson's family says his wake will be held this weekend and his funeral is set for Monday. He will be buried at Calverton National Cemetery.

My daughter is very upset as she and Dickinson's widow are childhood friends, graduating together from high school. Dickinson's hometown is Ronkonkoma, NY, located in Suffolk County, Long Island. My Dad is also buried at Calverton.
Posted by sig94 at 9:00 PM 2 comments:

Email ThisBlogThis!Share to TwitterShare to FacebookShare to Pinterest
Labels: Murder 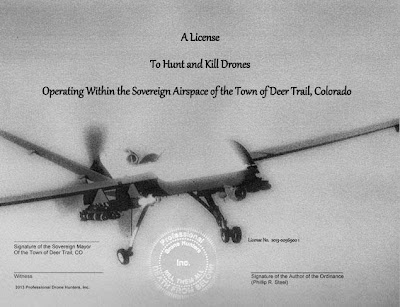 ENVER — Hunters in Colorado are lining up for a hot new license: $25 to shoot down a government drone over the village of Deer Trail.

Supporters acknowledge the licenses would be only symbolic, and a town election authorizing them is more than a month away. Still, about 1,000 people have applied for one.

I think it's probably a ploy to slam an extra $25,000 into the town's budget.
But ya know what? I'd probably spring for it just for the yuks. 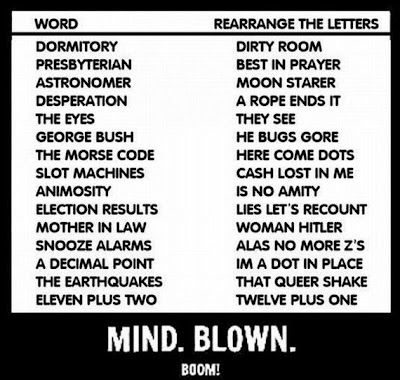 The Army psychiatrist sentenced to death for the Fort Hood shooting rampage has been forcibly shaved, an Army spokesman said Tuesday.

Maj. Nidal Hasan began growing a beard in the years after the November 2009 shooting that left 13 dead and 30 wounded. The beard prompted delays to his court-martial because it violated Army grooming regulations. He was convicted of all charges last month at his court-martial at the Central Texas Army post and sentenced to death.

Now, Hasan is an inmate at the U.S. Detention Barracks at Fort Leavenworth, Kan., home to the military death row. Lt. Col. S. Justin Platt, an Army spokesman, said in a statement Tuesday that Hasan had been shaved. He did not specify when or provide details, however.

Officials at Fort Leavenworth previously had said Hasan would be subject to Army regulations.

Hasan dispensed with all criminal defense counsel and represented himself during his trial. A message left with John Galligan, Hasan's first criminal defense attorney who still represents him in civil matters, was not returned.

Hasan said he grew the beard because his Muslim faith required it and was not meant as a show of disrespect. However, Col. Gregory Gross, the original judge presiding over Hasan's court-martial, ordered Hasan to be clean-shaven or be forcibly shaved before his trial. 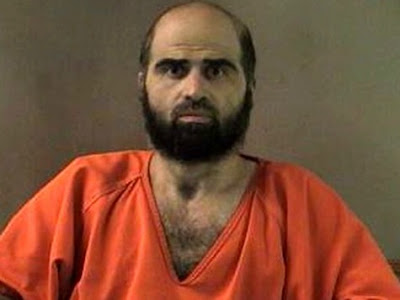 Maj. Hasan before being shaved.


The dispute over that decision led to appeals that delayed the trial by more than three months before the appeals court ousted the judge. The appeals court ruled that Gross did not appear impartial while presiding over Hasan's case and that the command, not a judge, is responsible for enforcing military grooming standards.

Col. Tara Osborn, assigned to replace Gross as the judge presiding over the case, allowed Hasan to keep the beard for the course of the trial last month. However, she warned that although she would not hold the breach of grooming regulations against the 42-year-old American-born Muslim, the military jurors might. 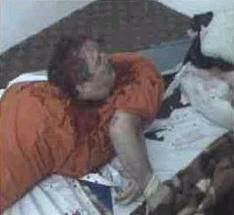 Maj. Hasan after being shaved. Dr. McCoy will be performing the gender reassignment as soon as Star Fleet Command runs it past the KlingonCare coordinator.

I just can't take this anymore.

Reasons Why We Shouldn't Attack Syria

Reason #1:
Sarah Palin rather succinctly phrased it and I'll paraphrase it.
Syrians are slaughtering Syrians in a civil war.
Mexico and Canada stayed the hell out of our four year romp through a sea of blood back in the 1860's; how about we follow suite and let the Syrians sort it out like we did. Who's ever left standing we congratulate and send our ambassador back over with lots and lots of flowers.

In Rwanda, the Hutu's slaughtered 800,000 Tutsi's, or was it the other way around? .... in any event, the US did nothing. The natives either got tired of pillage or ran out of Tutsi's or machetes. Either way, our Marines stayed home.

Saddam Hussein gassed thousands of Kurds and we also sat on our Marines. We had a good steady thing going until we decided to get all righteous over someone else's mineral rights.

Who are those intelligence assets? It was just leaked that 20% of all job applicants submitted to the CIA are terrorist sympathizers. In and of itself that is worrisome. What is even more problematic is this - how many got through? Is our intelligence now tainted by those who are feeding us wrong information in order to draw us into an armed conflict to benefit their own interests?

And now the French say they know something too. What do the Brits know? They must have had the same intel, Obugger must have sent them the same data but they turned down the party invitation and will keep their soldiers home.

Reason #3:
What is the end goal? Are we winning hearts and minds again or just jumping into another dust up? We didn't bother sending in the Marines to rescue our own Ambassador in Libya. Our Ambassador to Syria, Robert Ford,is safe and in no danger of being (in no particular order) killed and butt raped. The U.S. Embassy in Damascus was shut down on February 6, 2012, and is still not open. This is a good thing. Gee, wonder why Hilary didn't do the same thing in Libya...

So here's the plan. Make sure all US employees are out of the country and send them back in when the shooting is over. With flowers.

Email ThisBlogThis!Share to TwitterShare to FacebookShare to Pinterest
Labels: Syria, US Involvement 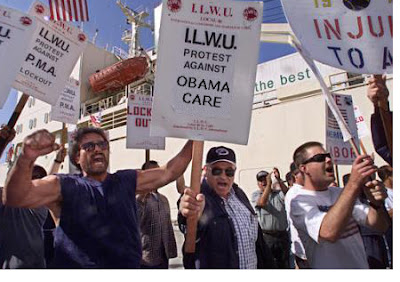 And indeed, Labor is in the news:


In what is being reported as a surprise move, the 40,000 members of the International Longshore and Warehouse Union (ILWU) announced that they have formally ended their association with the AFL-CIO, one of the nation's largest private sector unions. The Longshoremen citied Obamacare and immigration reform as two important causes of their disaffiliation.

In an August 29 letter to AFL-CIO President Richard Trumka, ILWU President Robert McEllrath cited quite a list of grievances as reasons for the disillusion of their affiliation, but prominent among them was the AFL-CIO's support of Obamare.

"We feel the Federation has done a great disservice to the labor movement and all working people by going along to get along," McEllrath wrote in the letter to Trumka.

This is huge. Might we see more exceptions from Obama-Care àla Congressional type subsidies? And what will the administration's reaction to the ILWU's stance on immigration reform? Will there be a Chicago Solution? For the most part, longshoremen do not react graciously to strong arm tactics. This could get interesting.
Posted by sig94 at 1:50 PM 4 comments: 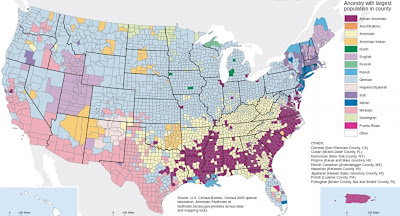 This is a fascinating map plotting the primary ethnic origins of every county in the US.